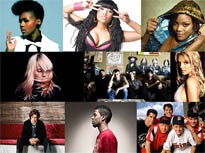 From The Biltmore to Deer Lake Park, here is your Vancouver Summer Concert Listy

It seems that summer is finally going into full swing, and though the patio might call your name, it’s probably best to spend this summer side by side with your fellow Vancouverites rocking out the best acts hitting the city. Here is a list of shows you surely cannot miss (and don’t fret if you can’t find tickets, Craigslist will have your back):

Bruno Mars & Janelle Monae: Holligans in Wondaland Tour (Friday, June 3)
Bruno will charm the pants off you – and you’ll also dance your socks off to Miss Monae. So really, you’ll just end up half naked at the show.
Tickets at ticketmaster.ca, Show at Rogers Arena

Kid Cudi (Thursday, June 16)
The last time Kid Cudi was in town he punched a kid at the concert. I like to think he’s going to redeem that moment with a solid performance at this early show at Deer Lake Park.
Tickets at ticketmaster.ca, Show at Deer Lake Park

Rihanna – Loud Tour with special guests (Saturday, June 25)
Last summer you probably made at least one playlist on your iPod with something from Rihanna. My personal fave? Only Girl in the World. There’s just something about that video that makes me want to wear bustiers and roll around in flowers.
Tickets at ticketmaster.ca, Show at Rogers Arena

Britney Spears with Nicki Minaj, Jessie and the Toy Boys, and Nervo (Friday, July 1)
The princess of pop with the latest lady of rap together on the same headline? This is as crazy as watching Britney attack a car with an umbrella. But this time we get front row seats.
Tickets at ticketmaster.ca, Show at Rogers Arena

New Kids on the Block and Backstreet Boys (Sunday, July 10)
The boy band genre’s favourite acronyms together, with openning act Matthew Morrison, Mr. Shue from Glee. You sincerely cannot make this stuff up.
Tickets at ticketmaster.ca, Show at Rogers Arena

Cold Cave (Thursday, July 21)
If sugary pop and boys bands are not your bag, check out Cold Cave with special guests Austra for a New York style indie electro dance party.
Tickets at ticketweb.ca, Show at the Biltmore Cabaret

Lucero (Thursday, August 16)
These guys from Memphis will remind you that you don’t have to always listen to Kings of Leon to get your southern rock fix.
Tickets at ticketweb.ca, Show at the Biltmore Cabaret

Josh Groban (Tuesday, August 30)
Listen to the music stylings from the guy that Katy Perry fake tattooed the name of on her boob or that guy who sang Kanye West’s tweets. Yes, look it up now on Youtube, or see him live at the Rogers Arena.
Tickets on ticketmaster.ca, Show at the Rogers Arena