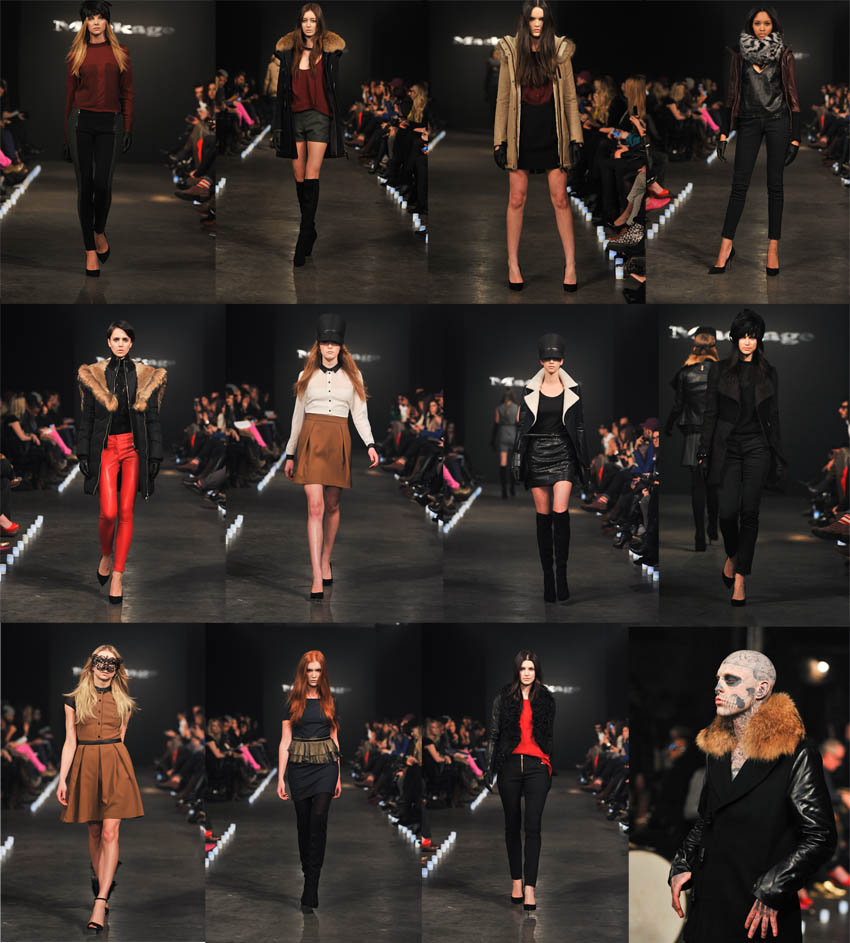 Give us death by Mackage fur collar: Walk like a wolf-woman drinking a cotton-candy martini at Mackage Fall/Winter 2012 show at the Distillery

Meredith is in the final throes of her journalism degree, and is covering her first Fashion Week for She Does The City. Beyond having great style, she’s got a tastemaker’s eye and a serious flair for sarcasm. We’re excited to send her and her bicycle to as many shows as humanly possible!

If I die next winter, as the Mayans predict, I hope it’s not because the world has ended. I hope that I die by suffocation from a Mackage fur collar. What I’m trying to say is that I really want one. Badly.

This week, I had the privilege to attend the Mackage Fall/Winter 2012 presentation in the Distillery District. It was a night of many firsts — my first fashion show, my first time in The Distillery and my first cotton candy martini(s). Upon arrival, I quickly learned that the mode of transportation favoured by the Toronto fashion crowd is not a bicycle, so alas I looked a bit out of place pulling up on my beaten bike. Oh well.

I spent twenty minutes wandering around the cobblestone paths to avoid standing awkwardly in line. Finally I succumbed to waiting with everyone else; I pulled the whole check-your-cellphone-a-billion-times move because I didn’t know anyone at this event and I was pretty nervous about being there alone.

Once let in, we were greeted by models serving cotton candy martinis (this is where I knocked back two) and there was a sno-cone machine. WICKED. The space was decked out like an old school circus and featured models posing as “art.”

Before we get to the collection here’s a little history lesson on Mackage. It’s a Canadian outerwear company that started in 2000. The designers, Eran Elfassy and Elisa Dahan, are Montreal based and in 2010, they launched their first ready to wear collection at New York fashion week. YOU GO CANADA!

Heather Marks opened the show and owned the runway, obviously. She sported a feather cap that looked like a small bird on her head. For the rest of the show, the amazing fur collars were everywhere. They are the latest and greatest infinity scarf and made the models’ necks look so toasty and so chic. I’m actually obsessed with these scarves and must invest in one immediately.

I noticed that having one collar on a winter coat just isn’t enough for Mackage. Their coats are utilitarian; there’s a layer that zips up for maximal warmth and a second layer that can be left open for maximal style. Ingenious!

The highlight? Seeing Rick Genest, also known as Rico The Zombie, close the show. With an epic hunch and a mean scowl he is like a barbarian on the loose. I loved when he modeled with Gaga for Mugler; it was really exciting to see him in human.

Is it wrong that I was dreaming about winter on the warmest day that we’ve had in 2012 so far? Well, maybe, but I think if you had been watching the collection come down the runway with me, you’d probably be thinking the same thing.

Final notes for next fall/winter: Wrap yourself in leather, bury your head in a fur collar, walk like a hungry wolf-woman and drink cotton candy.