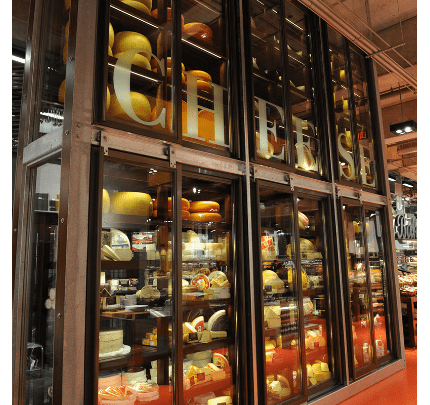 "No more will my life be Iron Chef UK, Battle: Whatever's Left In My Fridge Plus Some Cheese I Found."
Life Stories

I am not what you would call a domestic goddess. A typical dinner for just me tends to involve a plate of whatever vegetables I have around, probably some hummus, maybe a chilled out grain like couscous and meat if I can afford it. If I was going to get a life code tattooed, my bicep would read, “Anything can be a wrap.” In my little English lifestyle this suits me just fine; the grocery store near my house is small and cramped, filled with the basic essentials and not much else. If you want to find the kinds of greens you can be a jerk about (#Kale, #Spirulina, #IMakeSmoothiesCheerForMeInTheStreets) you have to take a bus to the much larger, better equipped giganto-store a few neighbourhoods over.

Holy hell, guys. Every grocery store here is like a giant temple to… well, if we’re honest to probable food waste, which is not great, but right now let’s focus on the positive and the positive is that cheese wall in the Maple Leaf Gardens Loblaws. These huge, sprawling edible metropolises with choice, choice, choice for days just make me want to buy some orange crocs and get Full Batali about things, nah’mean? No more will my life be Iron Chef UK, Battle: Whatever’s Left In My Fridge Plus Some Cheese I Found. The opulence of the North American superstore makes me want to buy greens and prep meals like I have a popular lifestyle tumblr whose followers get off on Tupperware. And I have been. Oh, I have been.

Suddenly, going grocery shopping isn’t a boring task, done, like laundry, out of necessity. (The nutritional equivalent of running out of clean underwear is when peanut butter on toast is no longer an option from your cupboards.) Suddenly, I’m listening when my sister offers to send me the recipe she just found for “black bean brownies.” If I need an ingredient, I know I can find it and three versions of it. If I need to just scrap the whole thing and buy real brownies because, come on, no offence black beans but you are not and never will be what goes in brownies, a giant, fragrant bakery section stands at the ready.

Accompanying some pals on their weekly food buy last week I was like a kid in a candy store, and not just in the candy section, which was massive. My friends balked: get a grip, Heisey, their eyes said, and loosen your grip on those yams, you’re freaking people out. It got me wondering how many other so-called chores might simply need a bit of a re-think, or perhaps a relocation. Was there a plusher laundromat somewhere that could make my dreams come true? A more fun way to vacuum? A gigantic spa where waxing was pleasurable? Well, no, it turns out, obviously not. Vacuuming is loud and boring and laundry is damp and boring and waxing is just rude and uncomfortable. That’s what makes Cool Groceries the best discovery of my month. That’s why my fridge is full of peppers, sauces, and kale. That’s why I feel #blessed.

"No more will my life be Iron Chef UK, Battle: Whatever's Left In My Fridge Plus Some Cheese I Found."

Our Pick of the Week: Taste of the Middle East