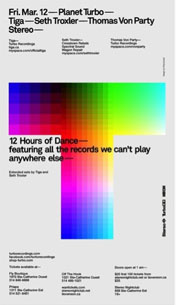 A Line in the Sand @ Segal Centre
Tableau D’Hôte Theatre closes off its 5th season with Marcus Youssef & Guillermo Verdicchia’s critically acclaimed A Line in the Sand. Inspired by Albert Camus’s L’Etranger and true events, A Line in the Sand is the story of an unlikely friendship between a Palestinian black marketer and a Canadian solider stationed in the Persian Gulf. Directed by Mike Payette.
8pm. Ongoing until March 21st.

Shirin Ebadi Lecture @ Concordia
As part of Women’s Week celebrations, CSU Speaker Series hosts the 2003 Nobel Peace Prize Winner, Shirin Ebadi. Ebadi was the first Iranian to win the Nobel Peace Prize, awarded for her outspoken campaigns for human rights and democracy in Iran. She will give a lecture on ” Peace, Women and Iran.”

Seven Minutes in Heaven Vernissage@ Galerie Lilian Rodriguez
Material Applied Vernissage @ Les Territoires
Art Matters continues this week, with lots of  ongoing art exhibits all over town. Two vernissages are being held concurrently in two galleries in the Belgo building. Teenagers, fake marriages and Italian in-laws are among the subject matter at Seven Minutes in Heaven, while Material Applied is devoted to textures, materials, textiles and design.

Girls Gone Mild: Data Cave, Team Canada & the Shambles @ Friendship Cove
Get mild this Friday as local acts Data Cave and the Shambles bring their sense-dulling grindcore to Friendship Cove. All proceeds go to the 2010 Fringe Fest production I Like Cowboys. Bring earplugs!

Planet Turbo @ Stereo
This 12-hour dance party promises “all the songs we can’t play anywhere else!” So cryptic it must be fun. With extended sets by Berlin’s Seth Troxler and locals Tiga & Thomas Von Party.