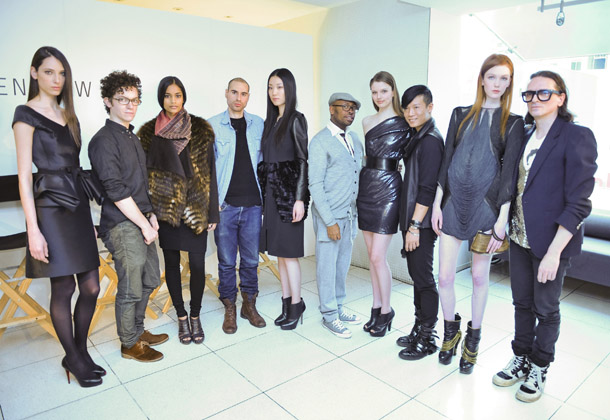 Monday morning, Toronto’s fashion elite gathered in the Holts cafe for a very civilized presentation featuring Canada’s top designers: Jeremy Laing, Denis Gagnon, Mikhael Kale, Lida Baday and Greta Constantine. Unlike years past when loud-mouthed fashionistas gabbed over top the commentary while fiercely knocking back wine, we were all ears for Holt Renfrew’s VP of Fashion Direction Barbara Atkin and co-host Jeanne Beker – the reigning Queen of Canadian fashion anything.

The designers took turns to talk about their inspiration for fall 2010, their descriptive anecdotes were buffered with ‘ooohs and ahhs’ from Atkin and Beker. Of course, we also took cues from the discerning eyebrow of MTV’s Dan Levy.

Kicking things off with a loaded gun, Beker asked Gagnon, “Do you think the women in the rest of the country have caught up with the stylish women of Montreal?”

Gagnon responded safely, “I love making clothes for women.” And we certainly love what he’s managed with fringe and zip for the upcoming season; mini dresses that will have you meowing with sex appeal.

It was “as feminine as I could go with black,” for Mikhael Kale. In terms of the intricate design, he explained like so, “I spend a lot of time alone.” We picture a dark basement with La Traviata blaring, drippy candles and an allusive pet crow.

As for the thought process behind Jeremy Laing’s totem pole dress, “I wanted to do something really really Canadian.” It is is far more elegant than it sounds. The Haida references mixed with beaver and red fox fur had us all quietly considering, “What does it mean to dress Canadian?”

Kirk Pickersgill and Stephen Wong were introduced as the “Yin and Yang” team behind Greta Constantine. When their model strutted out in skin tight leather pants and a powerful fur vest Wong declared, “We love the really edgy and provocative outfits,” and we love them for giving Toronto design such a fierce and fabulous identity.

Designer Lida Baday was ill, so unfortunately the powerhouse panel lacked a woman. However, as a longstanding designer at Holts, Atkin gave her due praise, “..beautiful clothes, well tailored.”

So next time someone asks you to talk about Canadian design, you can now elaborate beyond Joe Fresh. To that, we raise our coffee in cheer.