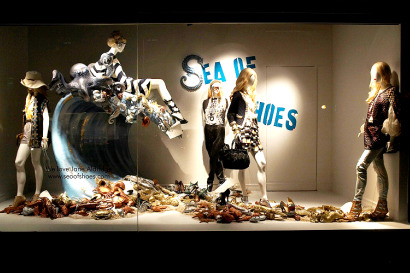 From I Want I Got to ‘Teen Vogue On Acid,’ Holt Renfrew’s Blogger Windows Catch Our Eye

Holt Renfrew…the crème de la crème of Canadian fashion traded in their usual go-to muses of Christian Dior and Alexander McQueen for a mish mash of fashion bloggers. The precious Holts window displays are currently inspired by The Sartorialist , Bryan Boy , Garance Dore , Sea of Shoes , Jak & Jil and I Want I Got . We like, but what’s this all about?

According to Holts, it appears as though fashion blogging is about three months ahead of old fashioned print. “It has completely democratized fashion,” says John Gerhardt, Creative Director of Holt Renfrew. Gerhardt also credits the fashion blogging boom as being “a great vehicle for promoting and expressing personal style.” Translation? Blog posts = mad spending.

We weren’t surprised to spot geekigirl Anita Clarke of I Want I Got at the premiere of Valentino: The Last Emperor. From behind oversized Oakley’s, she described having her blog immortalized by Holts as “surreal,” but seconded the opinion that “bloggers are the next voice, the ones dictating fashion, technology, entertainment, and [they] will be playing a more prominent role.”

1) “Stick to your guns” – Regardless if you want to discuss fashion, beauty, culture, entertainment, etc, stick to what you know and what you enjoy the most.
2) “Use your voice” – Having your voice heard above all else is of utmost importance in the outer limits of the blogosphere. It does not always pay to blog about what you think your audience wants, but to write about what you yourself enjoy and want to discuss.
3) “Internet mediums are your friends” – With the phenomenon of Facebook, Twitter, Eblogger, and so on, it is much easier to get one’s voice and name heard throughout a variety of channels.

I Want I Got started as a hobby and has grown into something of a fashion phenomenon. Clarke describes her style as “schizophrenic.” If that’s the case, then all aboard the crazy train! We love traveling through these fashion blogs, as they provide us with a little fantasy with our coffee break. No doubt, as you float by the windows on Bloor you will have a similar sensation. Ahh, to live like the mannequins in the window would be so dreamy!

Moral of the story? The word ‘blog,’ once a subordinate term thrown around for underdog media, is now officially regarded as a driving force and tipping point for fashionistas and high end retailers alike. To that we chant “BLOG ON!”