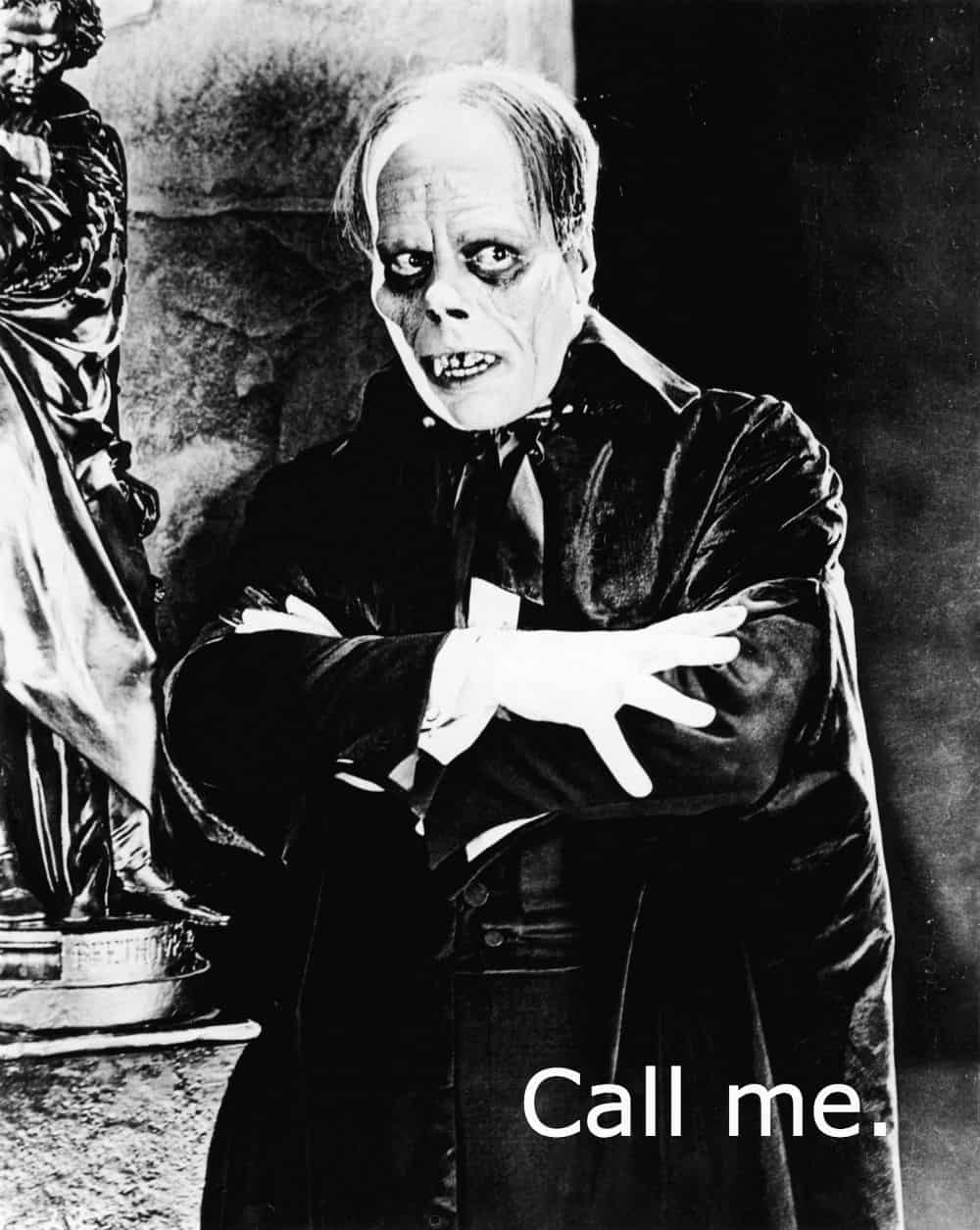 "Don’t have a music box with a dead monkey playing the cymbals on it, don’t have an old, haunted-looking organ, and, try to avoid living in a subterranean cave near the sewers."

How to have a crush like a normal person, and not an insane Parisian opera-ghost

I’m a person who is prone to having a crush. Over the years my crushes have been many and varied, blind to gender and the concept of “too old for you”. I’ve crushed on people I know, people I don’t, famous people, and fictional characters. Some have been so intense I’ve woken up and gone to sleep thinking about the person, and some have been more for sport – having a crush makes things a bit more interesting. They last from a matter of moments to a number of years. If you are very clever, pretty odd, strong-willed, curly-haired, sturdily built, and foreign, then I’ve definitely had a crush on you. If you are four of those things or above, your chances are pretty high. Sorry about that. I really do love a foreigner.

And while I’m sharing my feelings with the Internet-at-Large, I would also like to add that I have A LOT of them about the Phantom of the Opera, which I went to see this week. After all these years it remains truly, deliciously over-the-top ridiculous. This is particularly true of the part of the Phantom, perhaps the only person on Earth who certifiably crushes harder than me. And disastrously, as we came to see in Act Two. Here are eight easy steps to follow to make sure that you keep it cool around large chandeliers and your crush.

1) Avoid subjugating your crush. The audience first meets the Phantom when Christine Daaé, leading lady of the Paris stage, gets all 50 Shades and says, meekly: “Enter, master”. Not cool! You should be aspiring to steal this person’s heart, not their freewill.

2) Avoid abusing your position of power to seduce your crush. The Phantom is Christine’s singing teacher. In their first song together he calls her ‘child’. There is a lot throughout about how he has been carefully guiding her—clearly he is trying to guide her right into his pants. In his own words: “My power over you grows stronger yet” and “Let music set you free… only then can you belong to me”. This is ten out of ten for creepy behaviour. I have never used a position of power to seduce a crush, partly because I have never held a position of power. But I’ve had it done to me, and it really isn’t very nice.

3) Don’t put a wedding dress on a mannequin that looks like your crush. I mean, that’s really pushing it, isn’t it? First of all, how do you even get a mannequin made to look like a specific person? (Asking for a friend.) And secondly, dude, you go down to the shops, a creepy gentleman in a creepier mask, and buy a single wedding dress off the racks? Did you get it second-hand, for value? Or did you go to one of those fancy bridal shops by yourself and spend thousands of francs on a dress? Did you take measurements of the mannequin’s vital statistics? The mind boggles. The weirdest thing I’ve ever done crush-wise is steal a T-shirt of the person’s to sniff. That’s basically where you want to top out, weird fanatic behaviour-wise.

4) Don’t have a messy room or a crazy weird lair. Particularly don’t leave ephemera relating to the object of your obsession lying around, because you never know, they might one day come home with you. Of course you don’t have a mannequin in a wedding dress lying around, but if you’ve been on their Facebook page seventeen times that day, clear your internet history. Put away the tear-stained photos. Tidy up. Also, don’t have a music box with a dead monkey playing the cymbals on it, don’t have an old, haunted-looking organ, and, try to avoid living in a subterranean cave near the sewers. No wonder you never pull, Phantom.

5) Don’t write poetry/prose/a play/a film/a musical/an opera about your crush, and if you do don’t show it to them. Don’t, like the Phantom, write a wish-fulfilment opera entitled Don Juan Triumphant where you get the girl when really you are the type of creepy freak that has, once again, got a mannequin girlfriend in your lair. Also don’t, as I did when I was sixteen, write a poem about a teacher you have a crush on, and read it aloud at an evening where said teacher is, thinking they won’t know it’s about them. They will know, and they will tell you, and you will wish you were dead.

7) Don’t do any murders. This is generally a good life rule, not just for when you have a crush. Even if you only murder that guy we only saw for about two minutes, who was miming a hanging to the ballerinas, we’ll still know you’ve done a murder. Please don’t murder someone acting in your own wish-fulfilment opera Don Juan Triumphant so you can take over the lead role with the object of your obsession playing the leading lady where you sing a song together called ‘The Point of No Return’. That’s a really rapey name for a song. And look, I’ll admit, there have been times when I’ve wanted to do a murder. Well, one time. I wanted to murder an ex-crush who was a very bad person, a serial cheater and compulsive liar. But as I once heard Peter Andre say on Saturday night television, hating someone is like drinking poison and expecting someone else to die. You’re better than that!

8) After your litany of bad behaviour, don’t tell your crush that he or she doesn’t love you because you’re ugly. It’s not that. It’s that you’ve ignored rules 1 through 7 (and maybe other reasons on top… hates pets?). In The Phantom of the Opera, after the Phantom sings “That fate which condemns me to wallow in blood/has also denied me the joys of the flesh/this face – the infection which poisons our love”, Christine performs the most successful reverse compliment sandwich (neg-compliment-neg) of all time. She tells the Phantom that his face isn’t the problem, it’s his soul that’s deformed. Then she pashes him—that’s right, SHE KISSES HIM—then he’s so shocked that Christine manages to rescue her hot boyfriend (who he’s still threatening to kill) and escape from the Phantom forever. As everyone else is on the hunt for Phantom, he hides under his cloak using the ‘if I can’t see them, they can’t see me’ principle. What a guy. The proper, dignified way to deal with your crush rejecting you is this: go home, sob into a pillow, watch When Harry Met Sally, eat a whole family-sized packet of Doritos, and repeat over and over to yourself that next time will be different. After this process is complete, put your crush to bed (oh, the irony) and start all over again.

You can do it, brave crush-havers of the world. Now get out there and make the Music of the Night* with some lucky guy or girl!