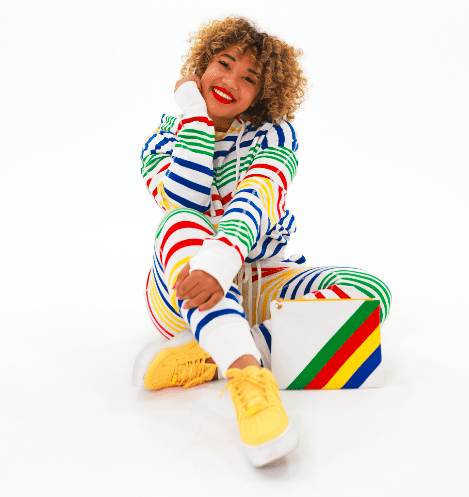 Courtney Quinn, of Colour Me Courtney, has a sizeable following (590K followers on Instagram, and counting). That’s partly why The Hudson’s Bay Company connected with her to re-imagine their beloved heritage brand; but she brings much more than buzz to this collaboration.
“I use colour as a way to show people that they deserve to be seen, and we deserve to stand out and take up space,” says the NYC blogger, who has worked with numerous big-name companies, including Disney and Nike.
Courtney grew up in Arizona, which she describes as “very beige”, and while the houses in her suburb all looked the same, her mother—an interior designer—always chose to decorate with bold shades and bright patterns.”We always had a lot of colour in our home, even though my mom exclusively wears black.”
Unlike her mom, Courtney has always preferred to wear bright colours, versus relegating them to couch accent pillows. Looking back, she can trace her desire for vibrant fashion to early childhood, “I was a competitive dancer, and I was always more interested in the costumes than dance.”
It came as no surprise when, as a teen, Courtney expressed a yearning to attend fashion school. But, her parents persuaded her to focus on business instead. It was something she excelled at; getting her MBA by age 21. However, when she made the move to NYC in search of a fashion career, the MBA was the one thing that proved to be a hindrance to landing a job. “Some people think it’s because my MBA made me look older than I was,” says Courtney. “[They] said it might have been an intimidation factor, and some people thought it just looked like a lie, because of how young I looked.” It was only when she removed it from her resume that she started getting callbacks.
She continued to grind away, trying to find her way in Manhattan, and it was during patches of mundane employment that her creativity took over. “I didn’t love my job, and I was throwing all my creative energy into my blog,” she says. “I’d come home from  work at 6 p.m., and then I’d sit and do my blog until 3 a.m. That was the work behind it, but that’s also the year I grew from 0-100k on Instagram.”
With her fashion workforce experience, combined with an increasingly popular style blog, Courtney finally landed a job that she actually wanted at COACH, but eventually it became too overwhelming to manage two full-time gigs. “About four years ago, I had to make a choice, and I chose the blog,” she says.
Unlike many YouTube sensations or Instagram influencers, Courtney didn’t have any particular viral moment that catapulted her into a different stratosphere—her notoriety was gained through steady perseverance and a clear mission: celebrate colour. “It’s been small growth through and through. I’ve hit a lot of mini-milestones,” says Courtney, who is clad in an HBC star print sweatshirt that she designed.

The HBCxCMC collection is youthful, cheery, and bursting with vitality. Knowing her business background, I ask her how she approaches working with other brands.
“I think of it as a marriage. The Internet is forever, which is terrifying, so if you put your name next to someone else’s, you have to be able to stand by them forever. Companies are made by humans, and humans make mistakes – it’s not always going to be perfect in the end, but at the time, I do a deep dive and look at not only what the brand represents, but the people behind it, before choosing yay or nay.”
Since she first began her quest to brighten the world with colour, Courtney has realized that choosing to wear flamingo pinks and grass green is much more than a simple palette preference, “A lot of people will say ‘I could never wear that colour’, and I’ll ask why. Then they usually say; ‘I think it will draw too much attention, I don’t want to be seen that much.’ It’s tied to confidence.” While she’s discovered deep-rooted anxieties linked to bright colours, Courtney also knows how much power colour holds,”On a dreary day in NY, I’ll walk out of the subway with my rainbow umbrella and people will look and smile.” Her pursuit to brighten up the world continues.