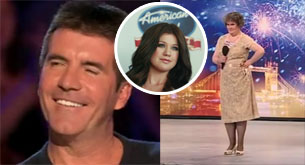 I dreamed a dream of Kelly Clarkson

Besides the French dudes (yuck) and non-existence of coffee-to-go (not as enjoyable as you might think), a certain non-fancy-pants-filled country—they made me say that—distinctly lacks North America’s pathetic celebrity worship. Or maybe I can’t read the headlines. But between cheese sweats and afternoon buzzes, familiar thoughts persisted: Is Gwyneth Paltrow still far superior to me? What grotesque wardrobe malfunctions have demeaned Britney Spears this week? Is my favourite on-again-off-again-on-again lesbian off again? And then I get back to hogtown, to someone called Susan Boyle.

Sweet, I thought, A million facebook status mentions can’t be wrong. A Pussycat Doll turned teen-musical star turned sexter, perhaps? Seen canoodling on the sidelines with model-banger Leonardo DiCaprio? Called out Kim Kardashian on her jiggly ladyparts to TMZ? It was gonna be awesome, of that I was sure.

So I get a-googlin’ and reluctantly land on the worst show ever, but the even worse British knock-off version. Cut to super-asshole Simon Cowell rolling his eye job at the average-looking (pretty good, by British standards) contestant for being not nearly as the barely-legal babes he cheats on his already much younger girlfriend with. Cowell and the audience roll with laughter when SuBo says she’s forty-seven. (For the record, so is Bonnie Hunt, Mary Letourneau and MC Hammer. Hilarious!)

Then, in what’s later called “the biggest surprise in the history of the show” – more shocking that another reincarnation of the same formulaic garbage’s still on the air? I don’t think so—Boyle belts out Les Mis while the bimbo girl judge fights tears, the camera cuts to whoever the other judge is, and Simon stews in seeming shock that old fat women are good at opera. And, scene.

Maybe it’s my newfound French cynicism, but I just can’t get Susan Boyled as hard as I try. Not that the singing’s not good, it is, but the mockery of her looks, the alleged virginity (that’s another column), the snickering audience whose snark surpasses my own, and the bullshit makeover—she’s just plucked, guys, and donning fake Burberry—is all leaving a bad British taste in my mouth.
So no more forwarded youtube clips please and I’ll stop feigning inspiration at yet another invitation to facebook fandom. We both know I’m busy mourning the LiLo breakup.