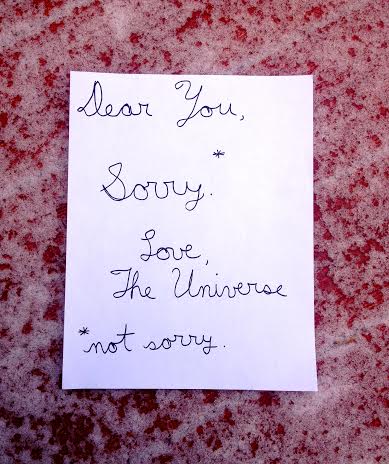 "While I can’t be sure of the significance of this rejection, it does mean one thing: you tried."

It Wasn’t That Bad: A Post-Rejection Letter Pep Talk

It might’ve been the weather. Or the hormones. Or the recent bout of insomnia. Or the fact that due to the weather, hormones, and insomnia, I was listening to one of my comfort food albums (those albums you know are about as good for you as Cheetos but that you just can’t stop indulging in). No matter the cause, the rejection letter I got last week stung.

I know what you’re probably thinking. Gawd, grow a pair, Kelly. This is hardly the first time this has happened to someone, nor will it be the last. You should get used to getting used to it. At least, that’s what I told myself as I blankly stared out my window after getting the ol’ thanks-but-no-thanks.

On the bright side, that phase lasted all of 15 minutes instead of the usual 36 hours, thanks in part to a friend confessing that she’d not only cried while watching a video of a dog reacting to the end of “Homeward Bound,” but cried again while telling someone the story of the clip. Laughing over that image, I shook my head, struck once again by how criminally lucky I am to have the friends I do.

These friends are ambitious, humble, hilarious people with whom I’ve often shared the sting of rejection’s many permutations. And while the things I’ve said to them on the subject are something of a blur (alcohol is often involved during these pep talks), I thought it might be a good idea to share the gist of it, since I know more than a few people currently dealing with weather feelings and left-out-in-the-cold symptoms. So:

There are people who say everything happens for a reason. I don’t know that I believe that. I mean, it’s a nice idea and all, but I find it sorta disempowering. If anything, I prefer the idea that things happen and you give them meaning. You could easily take this rejection as a sign from the universe that you’re not worthy. That’s an understandable conclusion, although honestly, kind of a lazy one. Quite frankly, I don’t buy it. I see how hard you’ve worked in the past and know you are not lazy, so cut the crap. This has got nothing to do with you, the person who rejected you, or the universe’s desire to screw you over. Honestly, the universe doesn’t really have time to make your life miserable. It’s too busy, you know, constantly expanding. While I can’t be sure of the significance of this rejection, it does mean one thing: you tried. You threw your hat in the ring when the vast majority of others keep theirs on their heads, even though you knew it might cost you. Whether it was a job, a love interest, a work of art you hoped would save humanity: you took a shot while others held back, well aware it might eventually hurt.

And that’s something to be proud of. So don’t waste too much time dwelling on this, because the world needs more people who take chances.