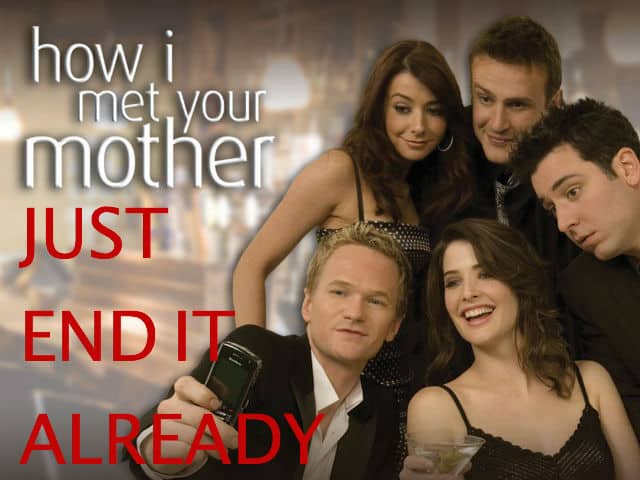 Friends said you'd stopped being any good long ago. They’re just jealous, I thought. They didn’t know you like I did.

It Wasn’t that Bad: Breaking Up With my Favourite TV Show

You made a liar out of me, “How I Met Your Mother.”

Friends said you’d stopped being any good long ago. They’re just jealous, I thought.They don’t know you like I do. Sure, you’d changed, but I remembered the good ol’ days, me and you and my old couch and a bottle of wine and a six-episode binge after wrapping up a long session of grad school reading. So what if I’d never understand Foucault, I told myself. I had you. But now… now you’ve gone and made me look stupid.

I feel like I’ve been pretty patient until now. I’ve forgiven the fact that your writers obviously created a character analysis of Ted Mosby that read something like “Ted falls in love with Robin in pilot episode. Loses her. Pines for her forever like a little bitch.” I put up with Robin’s incessant yelling at her co-worker Patrice. (What genius-led focus group decidedthat was funny?)

You could’ve, nay, you SHOULD have left it there, Mother.

But now we’re stuck with Season 10. This was supposed to be your last season. I came this far; I wasn’t about to give up on you. At first it seemed like the writers were stalling, stretching boring gags into full episodes (I swear if I heard Lily say “Thank you, Linus” one more time I was going to break my TV). Then came Monday’s episode, “Slapsgiving 3: Slappointment in Slapmar.” Wow. You outdid yourself. That was terrible. I guess the writers were so starved for inspiration they decided to let their 6th grade kids take a crack at writing this garbage. I can only assume these children received the following set of instructions: “Whatever you do, don’t advance the plot. And try to get in as many cheap laughs as possible. If all fails, have Boyz II Men sing at the end.” Incidentally, when all else did fail, even Boyz II Men couldn’t save you.

So, yes, I think we’re done here. I tried my best, but you’re obviously just not that into me anymore.

That said, I do want to thank you. Thank you for reminding me that there’s some shit in my life I keep choosing to do that just doesn’t work. Terrible sleeping patterns, self-pity, and a penchant for all things sugar—these do not work for me. Much like you, HIMYM, they suck up my time and make me feel bad afterwards. But I’m the one who can decide to change all that. I can cut those things out of my life the way I’m cutting you off my DVR record list. I can make new habits, take charge of my life, and make positive change.

Tags: Barney Stinson Get a Grip, Break Ups, How I Met Your Mother, It Wasn’t That Bad, TV