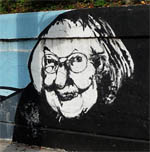 Jane’s Walks is back This Saturday! – Our Coles Notes on the Woman Behind the International Neighbourhood Walks, and our top 8 Picks

Jane Jacobs was an American-born Canadian activist who devoted her life to studying cities. Her passion for public space and urban planning led her to write 7 books, halt the gentrification of many local neighbourhoods in New York and Toronto, influence the withdrawal of expressway construction and aid in the success of housing projects. She saw cities as individual ecosystems that had their own dynamic energy which would change according to who occupied them and how they were used.

Her theories revolved mainly around the idea that cities should be planned according to local residents and pedestrians, as opposed to a car centered approach. She was passionate about parks, public spaces, sidewalks. She also believed the importance of local residents having input on how their neighbourhoods develop, and encouraged people to get to know their spaces by getting out and walking around them. Her life in Greenwich Village and Toronto supported her work on urbanism her death in 2006, but her legacy perseveres in North America. Jane Jacobs’s name is a go-to tag in liberal arts studies, as her theories extended beyond the urban sphere and into morality and work, which became fundamental to many of the ideas that architects and planners now assume as common sense.

Jane’s Walk started in 2007 by a group of her friends who wanted to honour her work. They created a series of free walking tours run by local volunteers, who would act as experts in their own hoods. Since then, Jane’s walk has spread to 68 cities in 9 countries with 424 neighbourhoods taking part. The event provides an opportunity for local city dwellers to get out and experience the urban spaces in their city and to meet their neighbours and explore improvements – it’s all about public dialogue, and opening up a venue for real change. Here are our top 8 picks:

A Hipster’s Guide to Ossington. Sunday May 8th, 2:00 PM
Hipsters, originally native to Queen Street West, were driven out of their natural habitat due to gentrification and were forced to find a new niche to settle their weary and stylish bones. Where was a suitable neighbourhood to be found? One with old world charm and new world swagger, sufficient dive hangouts and vintage resources? Ossington and Dundas did the trick. This walking tour studies the scruffy and artsy, skinny-jean wearing rapscallions we all know and love in their new habitat.

Bike Trails to Evergreen Brick Works Saturday May 7th, 10 AM
This bike tour will guide you through the Lower Don River ravines on the way to the Brick works, Toronto’s vibrant environmental community center. Toronto’s intricate ravine network is a central part of our city’s subconscious, for the most part dedicated as parkland and left almost entirely in their natural states. The walk will introduce participants to a sense of these shady areas beneath our built city, the communities that have evolved around it and the historical context in which to frame a larger story of our city as we know it.

Dissecting Toronto’s Street Food Vending Policy – Street Meat Sunday, May 8th, 3:30 PM
Aside from the plethora of olives, hot peppers, relishes, and myriad topping options, this walk muses over the politics behind everyone’s favourite drunk food. There are plenty of reasons Toronto’s recent attempts to diversify our street eats have been so short lived. Due to Ontario’s health protection laws, expensive permits and a potential restaurant lobbies, street meat has become a highly political issue. Guest vendors will be in tow to share their experiences working in the street economy and working their way through the city’s regulatory policies.

Cherry Beach: the Dark and Beautiful Histories of a Once Abandoned Land. Sunday May 8th, 2 PM
Toronto’s once abandoned port lands have acted as the notorious locale for many a clandestine activity (ever heard the song “ Cherry Beach Express” ?) The beach is associated in the minds of many Torontonians with hedonism and the 90’s rave scene, and well into our city’s recent history, was barely mentioned in public dialogue save on internet forums and message boards. Now, plans are underway to turn the area into an upscale, revitalized neighbourhood that will accommodate thousands of people. This tour will explore what is lost and what is gained as the cities vacant spots are buried under development.

Art & the City Tour Sunday May 8th, 11 AM
In the free lovin’ 60’s, Torontonians decided that art belonged in public spaces and buildings. In the shoulder padded and power suited 80’s, the city decided that big business should be the ones to foot the bill for it. As a result, to this day, the Financial District has some of the most expensive and noteworthy modern art in Canada. This art crawl will introduce you to the controversial sculpture that stirred up public debate in the 60’s, two art filled gardens, an architect’s secret message inscribed on Old City Hall, and a hidden art gallery. Bring your camera and sketchbook – this one’s sure to inspire.

Fowl Tour: Backyard Chickens in Toronto Sunday May 8th 10:15 AM
Keeping chickens in Toronto is illegal, but some people are so die hard committed to fresh omelette’s and baked goods – including many of our prized indie brunch haunts – and we owe it to the rebellious deeds of backyard hen keepers. For this walk, some of the city’s chicken proprietors have generously offered access to their flocks. It’s a bike tour, hosted by Lorraine Johnson, author of City farmer, with other seasoned experts in the field like the founder of the Toronto Chickens website, Karen May, and a few badass individuals who were busted for their chickens.

Historic Yonge Street: A Work in Progress Satuday May 7th, 11:30 AM
Toronto’s most iconic street (the longest in the world!) was home to a lively music scene in the 50’s – through to the 70’s, attracting artists from across the country. During the 70’s, it became a public spacing experiment that opened it up to complete pedestrian access, including open air cafes, street vendors and performance art. Yonge street continues to transform, and urban planners are exploring options for its maintaining its unique charm. The purpose of this walk is to explore new venues for enhancing streetscape experience while preserving its history.

Not a Cakewalk: West End Bakery Architecture Saturday, May 7th 11:30 AM
From multi coloured macrons and cupcakes on sticks to vegan, gluten free pandemonium, Toronto is passionate about its baked goods. The west end is home to some of the best treat shops and bona fide patissiers. This walk will take a look at the infrastructure of these coveted sweet spots, as they frame a unique experience that highlights the emotional relationships between people and food. There will be delicious surprises. Bring on the sugar coma.

Dr. Sara Mazrouei on Soapbox Science: An Innovative Platform for Women in STEM