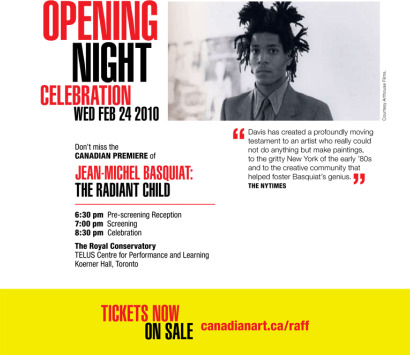 On Wednesday, Feb 24th, don’t miss the Canadian premiere of Jean-Michel Basquiat: The Radiant Child. Immerse yourself in 1980’s New York, and the artistic community that fostered the neo-expressionist genius of this legendary artist. The documentary, directed by Tamra Davis, premiered at Sundance this year, and is described as a “profoundly moving testament” to the man who is considered to be the first African-American artist to rise to international prominence in the art world. He collaborated with Andy Warhol, dated Madonna, showed alongside Julian Schnabel, and graced the pages of ArtForum and The Village Voice, for starters. This doc is sure to inspire-both thought and conversation. Buy tickets to the screening, at The Royal Conservatory Telus Centre for Performance and Learning at Koerner Hall, here: canadianart.ca/raff

Getting to know the Mi’gmaq Fishers of Listuguj, Quebec in new APTN doc series ‘The Last Land’

15 Minutes with Zoey Deutch from Elevation Pictures’ Before I Fall