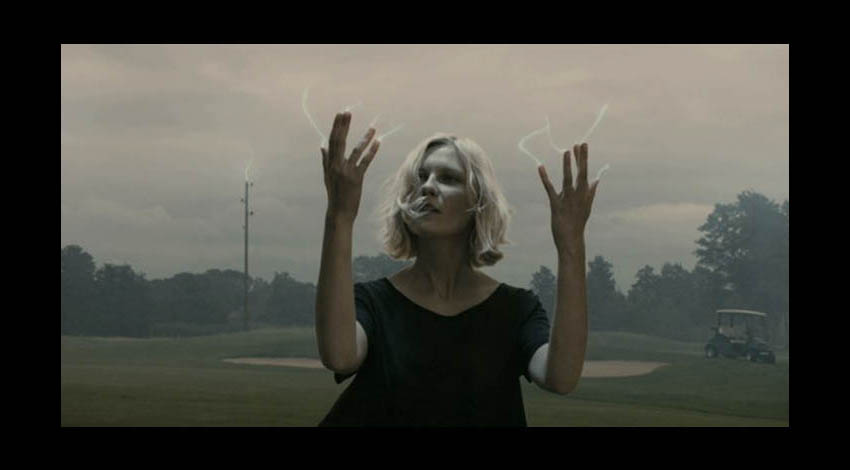 Lars Von Trier's Melancholia is out on DVD today, so you can take Alexander Skarsgard and the apocalypse home

While studying film in Denmark I first heard about Danish filmmaker Lars von Trier. He was known to be crazy, out of the box. He orchestrated dark and dreary films, like Dancer in the Dark featuring Bjork. He has never been on a plane, but he has been accused of making racist remarks several times.

He is also responsible for drafting Dogme 95, an avant-garde film movement with very prominent characteristics that are well-displayed in his latest film, Melancholia, which released on DVD today. (Yes, that means you can now take Alexander Skarsgard home). One of Dogme 95’s “rules of filmmaking” includes only using a hand-held camera. You’d think that this would translate to amateur film at its worst, but with Dogme 95 films, the story always wins.

Melancholia opens with a brilliant, winding overture that falls into a scene where Justine (Kirsten Dunst) and Michael (Alexander Skarsgard) are late for their wedding. (I know, it’s heart-breaking to see him get married to someone who isn’t you). Dunst struggles to be happy, even though the wedding is extravagant and wonderful. Here is where you’ll see lots of awkward and disastrous speeches between families. Danes are really, really great at writing speeches laced with interpersonal dissatisfaction. See the film: Festen, also a Dogme 95 treat.

As Dunst mopes around in her wedding dress, a blue planet named “Melancholia” hustles towards the earth, creating an apocalyptic mood throughout the film. As this happens, Dunst is in a perpetual state of emotional despair, and her sister Claire (Charlotte Gainsbourg) is an even more intense damsel in distress. Is this a trend for women in cinema? Must we always be the broken down dolls, crying in weakness when we don’t know what to do? Why are we so depressed?

Fair enough, the Melancholic planet is supposed to make us all sad. That’s how Melancholia will end the world. The film washes out in act two, but it’s definitely worth watching. If you’re into the apocalypse, babes, freaky Danes and melodrama, you’ll appreciate it. I swear.