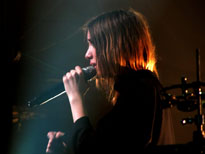 Lykke Li Live at the Phoenix Concert Theatre, Sunday May 22nd. Couldn't be there? Gorge on videos instead

Lykke Li is an assured great performance. First of all, there are the one-take live videos. The Swedish singer paired up with director Christian Haag to release a series of these featuring singles from her first album, Youth Novels.  The simple black-and-white videos, like “Breaking It Up,” capture Lykke Li in a more defined and powerful element surrounded by her band, singing, it seems for a moment, only to you.

Then, there’s the sold out concert at the Phoenix Concert Theatre on May 22nd.  Three years after the release of her debut album, Lykke Li returned to Toronto to tour 2011’s critically and fan acclaimed Wounded Rhymes.

The show was percussion heavy from the beginning, with opener “Jerome.”  Waving black drapes hang next to a darkly attired Lykke Li, whose gentle and emphasized movements are similar to Stevie Nicks.  “Sadness is A Blessing” is angelic and yearning thanks to her brazen child-like voice.

In the “I’m Good, I’m Gone” video, Swedish pop-sensation Robyn sits and watches Lykke Li singing before she joins in for the chorus.   The two singers are comparable. Besides being two of the biggest music exports from Sweden, the two female singers also showed amazing growth between albums.  Live, Lykke Li possess the serene-pitched voice and attitude-laced lyrics that Robyn evolved to on Body Talk.

Mid-way through the set, Lykke Li pulls out a cover of The Big Pink’s “Velvet” to perfect accolade, much like she did with the cover of Kings of Leon’s “Knocked Up” three years earlier.  She immediately followed this with the second single from Wounded Rhymes, “I Follow Rivers.”

The Wounded Rhymes-heavy set only left time for “I’m Good, I’m Gone,” “Little Bit” and “Dance, Dance, Dance” from her first release.  The dark mood was livened with a fiery red light show for “Rich Kid Blues” before concluding with the charged “I’m a prostitute, you gon’ get some” lyrics of “Get Some.”

The abundance of lust for more from the crowd saw Lykke Li and the band return to the stage quickly for the encore“Youth Knows No Pain” with the addition of the ritualistic chant and marching percussion of Kanye West’s “Power.”  This was followed by “Possibility” and a perfect pause mid-song to conclude that it is possible that Lykke Li is one the most unique female vocalists, lyricists and performers of our time.

For more pictures, check out http://www.fashionriffs.com

Sing Your Heart Out: Win Tickets to Tafelmusik’s Sing-Along Messiah at Massey Hall