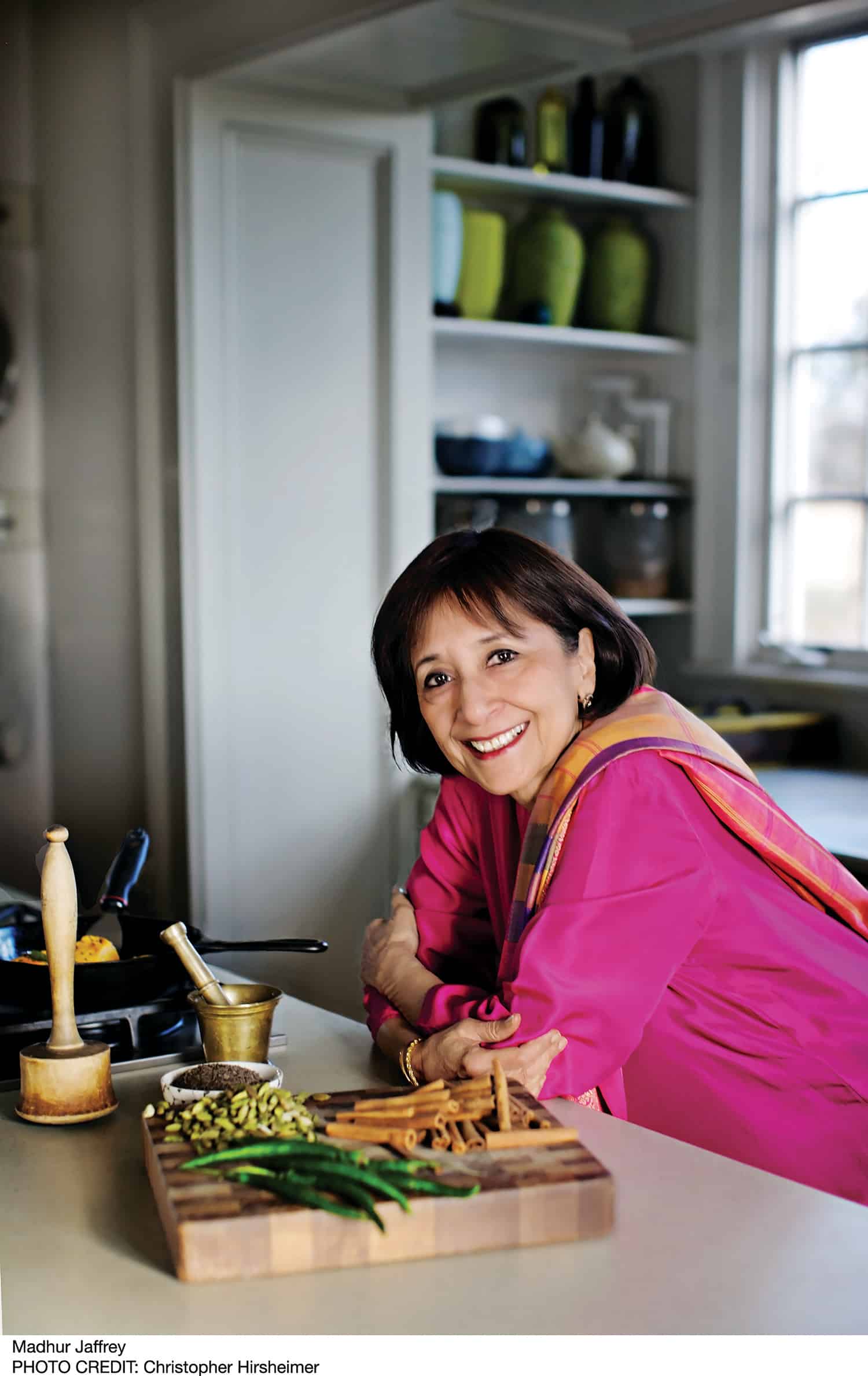 Growing up, Madhur Jaffrey didn’t dream of becoming the “queen of Indian cooking.” The award-winning actor and best-selling author of more than 20 cookbooks originally wanted to be a doctor. “The only woman I saw working—whom I liked very much and admired—was a doctor,” she remembers. “We used to call them ‘lady doctors.’ Nobody else worked; everybody else was like my mother—they stayed at home, looked after the children, looked after the clothes and cooking, but they weren’t interested in doing anything else with their lives. So that didn’t impress me at all.”

Jaffrey eventually opted to be an actor, enrolling in the Royal Academy of Dramatic Art in London. “I realized that the food at that time was terrible,” remembers Jaffrey. “I didn’t have much money, but whatever money I had to go out with never bought me anything that satisfied me; the Indian food was almost inedible in England at that time. That’s when I started sending letters to my mother saying teach me how to cook.” Her mother sent her letters containing three-line recipes: Take a little bit of this, and a little bit of that, cook it and it’s done.

“But they taught me enough, and I must have had some kind of palate; to be able to recreate in those short recipes the dishes that I ate as a child.” Jaffrey has subsequently brought the best of Indian cuisine to the Western world; her cookbooks have clinched seven James Beard Awards, and her classic, An Invitation to Indian Cooking, was inducted into the James Beard Foundation’s Cookbook Hall of Fame. Her latest book, Instantly Indian Cookbook, utilizes the Instant Pot to create easy-to-follow recipes—some entirely new, others reworked classics—for preparing Indian food at home.

“It’s the list of things you have to do [in prep] that puts people off [Indian cooking]. If you have the Instant Pot, you still may need 15 ingredients, but you just put them in the pot. I tell people don’t look at the list of ingredients; see how easy it is to put together,” she says. “Indian food is like French food or Italian food. There are easy dishes to make and there are hard dishes. There are dishes that can be done very quickly, and dishes that take time. You can choose.”

In Instantly Indian, she lays out techniques to make everything from buttery dal and pressure-cooked eggs to Kerala shrimp with coconut milk and Rajasthani red braised lamb. It also presents options for fresh chutneys and relishes, dishes that require no cooking at all.

Jaffrey adores coming up with the recipes for her cookbooks—sourcing, researching and testing them. It’s the act of writing itself that can be a slog. “You’re just putting it in; that’s less interesting for me,” she says. “You’re creating the language to express how to do it in a way that doesn’t confuse people. So you have to write clearly, and well. I find that very hard. Finding the right wording—that takes me time. Because I want to be crystal clear so that people who are reading don’t go wrong at any point.”

Looking back over her career, Jaffrey affirms it was her persistence that led to her greatest successes. “Life can throw you all kinds of twists and turns, you know,” she says. “All kinds of things can happen that derail you. But I’ve never been stopped by anything. If I can’t do one thing then I try another. I’ve never stopped doing anything if somebody said no to me. I feel we have to persist with energy and do whatever we’re doing as fully and as well as we can. I’ve followed that throughout my life, even now. That to me is the excitement of the work. Researching, testing again and again, writing it clearly. Hanging on, until I get it absolutely the way I want it. I think that’s why my books have done well.”

Olivia Biermann, Author of “Liv B’s Vegan on a Budget,” Has a Recipe for Everyone–Vegan or Not