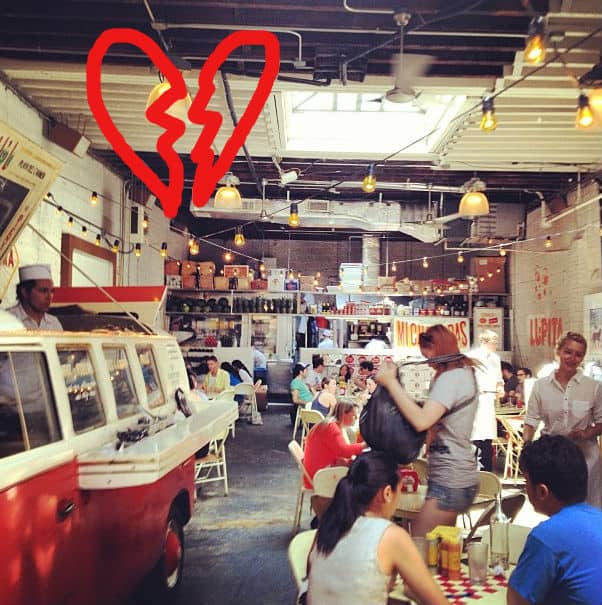 "At my home in London I am a ten minute bike ride away from two burrito-purveying establishments: I have been to Burrito Cafe, but have so far avoided the unpromisingly named 'USA Pizza and Burrito Bar.'"
Life Stories

My boyfriend broke up with me in a Mexican restaurant #blessed

The end of my life’s first great love occurred contemporaneously with the discovery of my second. This will perhaps sound less callous when you note that my life’s second great love affair has been burritos. There have been new relationships since that first love of course, but they’ve all been either equal or secondary to my relationship with some combination of refried beans, cheese, guacamole, and tortilla.

T. and I met at university. He was part-Mexican, as he told me often. He was very proud of this. The purported ratio of Mexican to non-Mexican parts was unclear, and shifted throughout the course of our relationship, as I met more and more of his family members who turned out not to be Mexican at all. He was 50/50 until I met his parents, a Scottish-Canadian man named after a famous UK poet and a blonde woman with a gap in her teeth that she claimed was lucky. He was a vague 25% until I met his grandmother, who had in fact been born in Mexico, but had run away to Canada with her European high school teacher at eighteen. I think we settled on one eighth. Yet somehow, from our first meal together in the autumn of 2006 to our second-last in the fall of 2009, we did not consume a single burrito.

Of the approximately twenty Mexican restaurants in Toronto, ten are dedicated specifically to burritos. You can tell this because their names contain the word loudly and proudly: Burrito Boyz, Burrito Bandidos, Big Fat Burrito, Mission Burrito, Fat Bastard Burrito, etc. The word fat also features prominently. In the five years since 2009 I have been to most of them at least once. At my home in London I am a ten minute bike ride away from two burrito-purveying establishments: I have been to Burrito Cafe, but have so far avoided the unpromisingly named “USA Pizza and Burrito Bar.”

They are the perfect comfort food. Warm and soft and filling, a light crunch provided by lettuce and some vegetables to complement the overall oozy texture of guacamole, beans, melted cheese, and sour cream. The kind of thing you can’t really eat alone. Someone needs to be there, a testament to the fact that a burrito is a choice you are making, not a lifestyle. You have friends and  a job and a life outside of this dimly-lit restaurant with the linoleum floor and the folding chairs, and you will return to it shortly, but first you will do something truly unspeakable to the foil-wrapped parcel in front of you containing enough food to reasonably provide three full-sized adults with a meal.

T. and I met at a house party. A friend of mine in first year was dating a guy who was—if you can believe it—in second. He had his own house and we could. not. stand it. They were throwing a back-to-school party and we (young, eager freshman that we were) got there embarrassingly early. So early that when a tall, handsome, partially Mexican man answered the door, he was not yet wearing a shirt. He had a six pack. (This mattered, at the time. I was still being weaned off of Josh Hartnett posters ripped out of YM.) The six pack later told me that his name was T. and that he was shirtless because “all” of his clothes were in the wash. We found we shared a drama class and made a habit of having lunch together afterwards. When I went on a few dates with one of his friends, he made fun of me. One night we had planned to meet friends at a local club, in the middle of the gross Canadian winter. Everyone cancelled. “Should we still go?” he asked. “Sure.”

The next morning we made breakfast and I wore his sweatpants. We annoyed our friends for the rest of the semester, and presumably several years beyond. Through some teen romance voodoo we spent the summer in Italy, living and working in a dried up ski town in the Alps for a now-defunct government program that took bureaucrats’ children away from them while they weren’t in school. We taught English four hours a day and had sex for the remaining twenty. We travelled to France, drinking wine on the beach and failing to smoke cigarettes, 19 and alone and the most good looking we would ever be in our lives. One night we took the train to Monaco, won several hundred Euros and spent it all on champagne. We said “I love you” to each other when we got back to Canada because we had both been intimidated by the raw, unfiltered romance of the European setting. I turned 20, then 21.

This whole time, I did not eat a single burrito. Not one. I knew they existed, of course. There was a Mexican restaurant in our little university town—Tacos El Asador. Our house was across the street and still I did not go there. Poutine was really the It Food for students at the time. I ate all of the individual ingredients required for a complete burrito often, separately. I knew my way around a plate of homemade nachos better than most. I had experienced the odd taco night and was an accomplished fajita chef. I had a real boner for sour cream.

A year older than me, T. got into an overseas grad school program midway through my third year. I sat with him in the student newspaper office while he did his entrance interview. They liked him, I could tell. “Well,” I offered, when he got off the phone. “We could break up. England is very far away. We could get back together when I come over next year.” He would not hear of it.“What’s the point?” he said. “We’re going to be together a long time, next year included.”

Months pass and it is T’s 22nd birthday. His plane leaves the next day. We are celebrating this milestone with his family, at a Mexican restaurant. T’s Mom had said “of course,” after the words “Mexican restaurant” on the phone. I do not see why “of course” we are going there but do not really care. Mentally, I am already about two weeks into the tragic but beautiful yearnings of long distance, sending and receiving gorgeous love letters, pining dramatically by windows and in cafes, beatifically alone.

We arrive a few minutes ahead of everyone else and settle into a booth, looking over the menu. “I think I’ll get a burrito,” I say. “I don’t think we should stay together when I go to England,” he says.

I had a few seconds to think about this. Mostly I made a high-frequency noise audible only to dogs and heartbroken teenage girls. The noise morphed into a strangled but bright “HELLO!” as I held back tears and shrieked a greeting at his parents, grandmother and little brother, who had arrived together. I made small talk about my fourth year courses with the parents, discussed the menu with the grandmother, and asked the brother about his World of Warcraft stats. T tried to hold my hand under the table. This gesture was absolutely not returned.

While T’s Dad ordered a round of drinks for everyone, I went to the bathroom and cried, ugly and loudly, for a long time. Not too long, obviously—I had to get back upstairs for margaritas. I spent a few minutes wiping my face clean of smeared mascara and the shattered pieces of my girlish dreams for the future, and returned to the table.

Our food had already arrived. T was staring at me and I knew he knew I had been crying. He gave me an angsty look that said, “Sorry.” I gave him a look that said, “Kill yourself.” I slid into the booth beside him, stopping at enough of a distance that I saw his grandmother notice. “I’ve never had a burrito before,’ I said cheerily, trying to not to blush or cry or stab T. in the face with a fork.

The anticipated weeks of exquisite longing for my overseas love were replaced in my imagination with visions of a future ruined. Obviously, my life was over. I was 21, alone, and had been betrayed by my true love. I would never know true happiness and would die alone, cold and—holy shit. Good lord. The burrito was amazing. It was like all my favourite sauces, fillings and flavours had been brought together and wrapped gently in the arms of my other favourite thing, warm bread. How had I never had one of these before? I ate quietly but with what I presume was visible purpose. For the first time, I experienced that thing where it’s like, should I keep eating this burrito? I’m pretty full and I probably can’t but maybe I should just try? Just because the best stuff probably collected in the bottom and I won’t eat all of it but… oh there it goes, looks like the whole thing is gone I guess? I did not need to deal with the T. thing anymore. I needed extra cilantro. I was not interested in heartbreak. My world was green salsa. Sure, my chest cavity felt like someone had pooped in it, but how bad could the world be, really, if this sheer amount of sour cream could exist as part of a single meal for one person?

When the plates were cleared, T’s parents brought out a birthday cake. I abstained; I was too full. I sang “Happy Birthday” to him with his family and may even have smiled for a picture. I do not know where that picture is now, but I feel sorry for it.

T. moved to England the next day, and a few months later I started seeing an old friend who became and stayed my boyfriend. You know what they say: when God closes a door, he opens an artisanal Mexican-fusion food truck.

"At my home in London I am a ten minute bike ride away from two burrito-purveying establishments: I have been to Burrito Cafe, but have so far avoided the unpromisingly named 'USA Pizza and Burrito Bar.'"