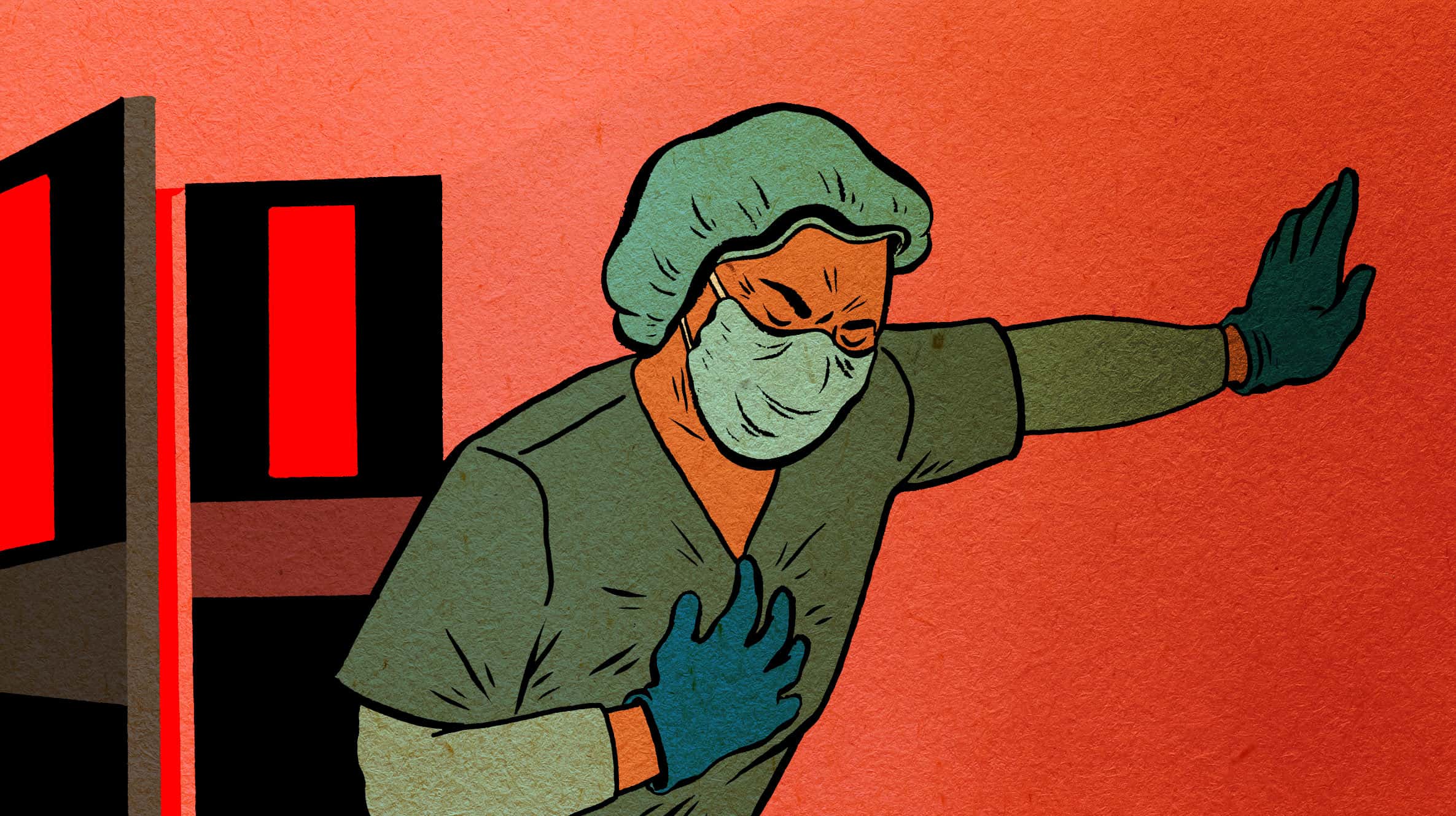 "There are no breaks. You're working for 12 hours straight and you're lucky to be able to go to the bathroom."
Life Stories

Emily Walters* is a nurse practitioner who works in the emergency department of a Toronto hospital. She also works in an emerge-adjacent role at a hospital in a medium-sized Ontario city, and has worked in its emerge, too. She’s been a nurse for more than 20 years, including during the SARS outbreak in 2003.

When COVID hit it was PTSD for me because I worked through SARS, and it was enough that I wanted to quit the profession. It was just really, really tough at that time. I felt like we weren’t really supported during SARS at all.

With SARS we didn’t know what we were dealing with and it blew up so fast. I find that we’re a lot better in terms of PPE now than we were back then, but in other ways we are not much better. Because at least back then if we had to respond to a code blue, the docs in emerge would be there to help us during an arrest. Now we have docs that will stand outside the room with a baby monitor while the nurses are all inside with the respiratory therapist. So you’re outside safe while we’re all inside trying to deal with a patient who’s coding. That’s upsetting.

But SARS is nothing compared to what we’re dealing with now. This is far worse.

When I last worked in the ED in Toronto in September — I had to stop doing so because I work at two different hospitals and they don’t want me bringing potential COVID back and forth — it was just horrendous.We had a lot of ambulances coming in and they don’t stop, and I imagine it’s even worse now. And unfortunately, staffing was really bad already. We would work with five to seven nurses short, and there would maybe be three senior nurses.

And when I say senior, I mean anybody who’s got 10 years plus. They also consider anyone who’s got more than a year semi-senior, which is incredibly scary because it takes at least two years of being an emerge nurse for you to feel 100% comfortable. So I find that that affects patient safety. Working as a charge nurse, you see that, because you are responsible for ensuring that nothing goes awry and that staff are feeling supported, but the patient-to-staff ratios are bad and we’ve got acutely ill patients more so than usual in the emerge.

It’s been really difficult to manage. There are no breaks. You are working straight for 12 hours and you’re lucky to go to the bathroom. I knew that when I went on shift there was no chance I’d be able to go and sit down and eat because that would be leaving my colleagues. Because I’m senior I would be leaving my fellow triage nurse.We typically would have four triage nurses but it was just me and one other triage nurse managing well over 50 patients in the waiting room. And these were very sick patients. You would also have very junior paramedics there who are not entirely seasoned enough to spot a patient going sour. So again, that falls on you. It’s just unsafe.

The staffing issues are ongoing. It started with wave one. I worked through wave one in the emerge and we were just not getting support from management and being told pretty much to suck it up. And so people would just call in sick because of burnout, not so much because they were exposed to COVID or isolating or anything, just pure burnout. And then as we got into the different waves, my colleagues would get to the point where they’d say, “I’m not going to continue to work like this.” And I’ve had those thoughts a couple of times where I’m thinking, “I’ve been in the field for over 20 years, what am I doing? Just putting myself at risk. My health is deteriorating because I don’t eat. I’m diabetic and I’ve got to plug on and try.” And nobody wants to deal with a sourpuss nurse, because they’re bitter, they’re tired, they’re angry because of the situation. And you definitely don’t want to project that to your patient, but it’s hard to keep going when you’re faced with this. So I know a lot of it is burnout and the lack of support from the government.

It’s a really bad situation here [at the hospital in the medium-sized Ontario city] because they have patients in the hallway everywhere. The other day I saw a patient on a stretcher with an N95 mask with a droplet contact sign on the stretcher. And I thought, “Excuse me, I don’t think this is right.” Because this is how we’re going to get sick. I don’t know what that patient had, but they were on isolation precautions. Why were they in the hallway? And then you’ve got one nurse who’s taking care of the patients in the hallway. And if they’re short, they’ve probably got an assignment with patients in the rooms as well. So I’m not sure what their ratios are like, but I know that patients are everywhere and it just looks like a war zone.

I do see the cracks with the staff. They’re feeling exactly how I felt working in Toronto. Tired, angry, upset at the system and how it’s failed us.

We got into this profession to help people, and right now we can’t do enough because we don’t have enough to give. We’re not being supported and we’re tired and we’re thinking, “Well, I can only do what I can do.” And you’re also emotionally exhausted. So it’s hard to deal with all the phone calls that you get; the families trying to find out how their family members are. It’s really, really tough to deal with because it’s like, “I really want to update you, but if I don’t get to this patient and make sure that they’re  seen, had blood work done, make sure that their medications are given on time, that’s a major, major problem.” I know the families are upset because we’re not getting back to them. But you have to pick and choose your battles at this point. We should never have to be in that position.

The violence has also increased because family members are being told “You can’t come into the hospital with your loved one. I’m sorry.”

I would like people to be a lot more understanding of what your nurse is going through. We’re all struggling, but let’s try to keep our anger in check, and not take your frustrations out on the person who’s taking care of your loved one or you, you know? Because we’re just barely hanging on by a thread and we’re trying to get through this. We totally understand what they’re going through, but we’re struggling just as much with everything. That means the moral dilemma of, “I’ve got to do this, but I know that it’s not what I would normally do. I’m not giving you the best that I feel that you should be getting, but it’s because this is what we have to work with.”

We need to repeal Bill 124. That’s what it comes down to. Last evening I saw that the fire department’s getting rapid antigen tests for regular testing and we got our 25 cent raise. We’re treated worse than second-class citizens.

Write your letters, speak up, because when it comes to anything, the politicians have the power to do something about this, and stop redirecting anger at the wrong people.

This interview has been edited and condensed for length and clarity. To see more interviews in this series, go here.

"There are no breaks. You're working for 12 hours straight and you're lucky to be able to go to the bathroom."