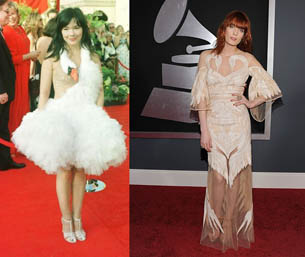 Pop5: From Florence’s frock to monkeys riding pigs, we have got the best ofs for this lovey-dovey mid Feb week

Florence’s dress – Eggs aside, this year’s Grammys were really great. Watching Bruno Mars doo-wop his amazing track ‘Grenade’ and Janelle Monae rocking out, Arcade Fair staging a massive upset to win Best Album and Mumford and Sons taking the stage with Bob Dylan were all major highlights. And of course, some seriously gorgeous dresses were on show on the red carpet. So why sum up the Grammy’s with Florence Welch’s (of Florence and the Machine) dress? Aside from the Givenchy dress being beYOOtiful, the outfit is a total pop culture footnote. This year we all flocked to the cinema to appreciate the stunning and creepy Black Swan. And of course there is the nod to another famous swan dress; the one Bjork wore to the 2001 Oscars. Welch’s style is always a display of glamorous eclecticism. I’ve already forgotten who won the Best Pop Duo Grammy last night but I won’t soon stop swooning over the delicate embroidered number or praising the singer’s bold pop choice to wear it!

Fleet Foxes new single – If, like me, airy harmonies and sincere lyrics gives you goosebumps, I’m sure you will also be anticipating new music from the Foxes’ following the brilliance captured on their eponymous album. We still have to wait until May for the CD release but the debut single, ‘Helplessness Blues’ has arrived to whet our appetites. Side bar; if you haven’t yet heard the Tiger Mountain Peasant Song cover by two sisters absolutely killing it in the unreal acoustics of a Swedish forest, you’re missing out. And yes, I’m fully aware of the strangeness inherently applied in that sentence.

Russell Brand has a busy week – Brand has left his patchy stand-up and lothario past behind him. He’s officially become a North American mainstay and this week he was everywhere. His Saturday Night Live appearance was pretty panned, his face loomed large as projected on Katy Perry’s skirt during her Grammy performance, and the trailer for Hop (about a recalcitrant Easter Bunny) was released. I could do without any of these items but this week the trailer for Arthur was also released and all is forgiven. In the remake, Brand plays a naughty billionaire manboy supervised by Helen Mirren. Who knows if the film will be any good or it’s a case of ‘the best bits are in the trailer’ but I’ll certainly be buying a ticket to find out. I’ll also admit to watching the trailer back to back to back and giggling madly each time. Check out Brand’s pitch perfect comic delivery here.

American Idol – I don’t miss Simon. Steven Tyler is the best kind of batshit crazy and Jennifer Lopez is actually engaged. The dramatic Hollywood Week continues this Wednesday and Thursday nights and for the first time in a long time, I’m actually considering tuning into Television’s juggernaut. However, all bets are off when X Factor comes to town. In the meantime, this year’s crop of new idol contestants and judges might just be worth a watch.