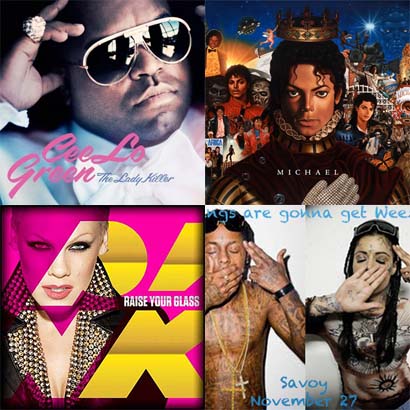 Raise Your Glass Video– Who do you turn to for rousing fem anthems that are a few steps removed from grrrl power and Spice Up Your Life? Ah, Alicia. Pink is back with a new video for her catchy song featuring models being milked, some awesome prom dancing and a bit of nookie with a rabbi and a nun. Raise your glasses bitches.

MJ sings from the grave – The King of Pop is going the way of Tupac with a posthumous album release. The first single, ‘Breaking News’ went live on his official site this morning. There’s already talk about whether the voice on the chorus is even him. Woop woop, scandal alert! I dunno. Is it sacrilegious to say I’m totally unmoved by the song and uninterested in the news? I’d rather listen to this or rock out to my 4th grade Free Willy JAM.

Cee Lo Green’s New Album – Summer’s other breakout song, F*** You by Cee Lo get’s the full album release. ’The Lady Killer’ is out on November 9th and is already garnering raves.

Lil Wayne’s Jailbreak – So Dwayne Michael Carter Jr. aka ‘Lil Wayne aka Weezy is free! He finished his Rikers sentence and blew that popsicle stand last Thursday. Welcome back sir! He let his presence be known on twitter: “aaaaaaahhhhhhmmmmm baaaaakkkkkkkkkk” and on stage when he dropped in on the Drake concert in Vegas to perform ‘Miss Me’ with Jimmy Brooks. We’ll all be celebrating at the Savoy, 1166 Queen Street West on November 27th at the ‘Free Weezy’ Party hosted by some of our SDTC gals, come out!