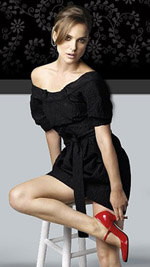 Pop 5 November 29, Robyn gets remixed, Lady Gaga turns off Twitter and we all, ungracefully, swarm the theatre for Black Swan

Robyn Gets Remixed
Robyn’s been a very busy Swedish Berry this year. But out of the three albums she’s pulled off, the best song is Indestrucitble; acoustical gorgeousness and a hawt video to boot! (Can you tell I’m a seasoned music writer?) A-Trak has now got their hands on the song and produced a killer remix.

Celebs turn off Twitter
Wednesday is World Aids Day and Lady Gaga, Justin Timberlake, Usher and others will be dismantling their social networking sites in aid of Alicia Keys’ Keep A Child Alive Charity. You can send a text to make a $10 donation and when a million dollars has been raised, we’ll all thankfully get to hear more about what Usher ate for lunch. Visit here to find out how to donate. You’ll be supporting children and families living with AIDS and HIV in Africa.

Black Swan
Darren Aronofsky’s new movie had us all dressing like swans for Halloween and , minus the few who saw it at TIFF, we can now finally catch it in theatres come Friday. Natalie Portman is an Oscar-bait ballerina who may or not be cuckoo for coco puffs. The psychological thriller is filled with a killer cast and amazing dance work. And Natalie and Mila Kunis totally make out. So if the ballet itself isnt’ a lure, you can totally sell it to your boyfriend that way….

Your Highness Trailer
The trailer for Your Highness is now online and shows a different side to Natalie. I mean, what was really missing from the cinematic landscape was a Medieval stoner flick. But around the line “If your vagina is anything like my hand….” I realized this is a film I would probably be seeing.

Nicki Minaj Documentary
MTV aired My Time Now, a behind the scenes look at rap’s new Ueen on the 28th. Look for it in replays or check it out online . The documentary puts Beyonce’s ‘behind the scenes’ special from last week to shame. Nicki gives her fans real insight by being brutally honest and frequently hysterical. Plus an ass like that demands respect.