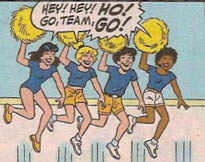 Pop 5: From Betty and Veronica to Honey Badgers and “This Party Took a Turn for the Douche.”

Awards season is done and big movie releases are weeks away. New TV doesn’t premiere until spring and it’s a quiet week on the music front. What better time to shine a Pop5 eye on amazing, trending viral videos?? Join me. Friends. As we explore the crazy world of t’internet.

The Honey Badger – Shit is crazy. I don’t know what’s fiercer; the honey badger or the wildlife narration.

Garfunkel and Oates’  new tune – Female comedy duo Garfunkel and Oates released their new single. I identify strongly with it, that’s all I’ll say. And if you like ‘Hand Job, Bland Job, I Don’t Understand Job’, be sure to check out ‘ This Party Took a Turn for the Douche‘.

Cuban Car Salesman Gynaecologist – The French Horn player suggests this might be a fantastic prank by I still think it’s hilariously genuine. Either way, I know who’s giving me my next pelvic exam.

Skouteris Mash-up  – Greek DJ Robin Skouteris is one of my favourite guilty pleasures on Youtube. Check out his Britney, Rihanna and JLo mashup. I thought I hated the Britney track but now I’m pretty addicted.  For shame. Sample at your own indie-cred peril.

Archie Comics, The Movie – For all the Betty, Veronica, Jughead and the gang fans out there. It gets hilariously dark. Expect somehow, you’ll be giggleing at the roids rage, broken virginity pledges and homoerotica going ‘hahahaaa, so true!!’