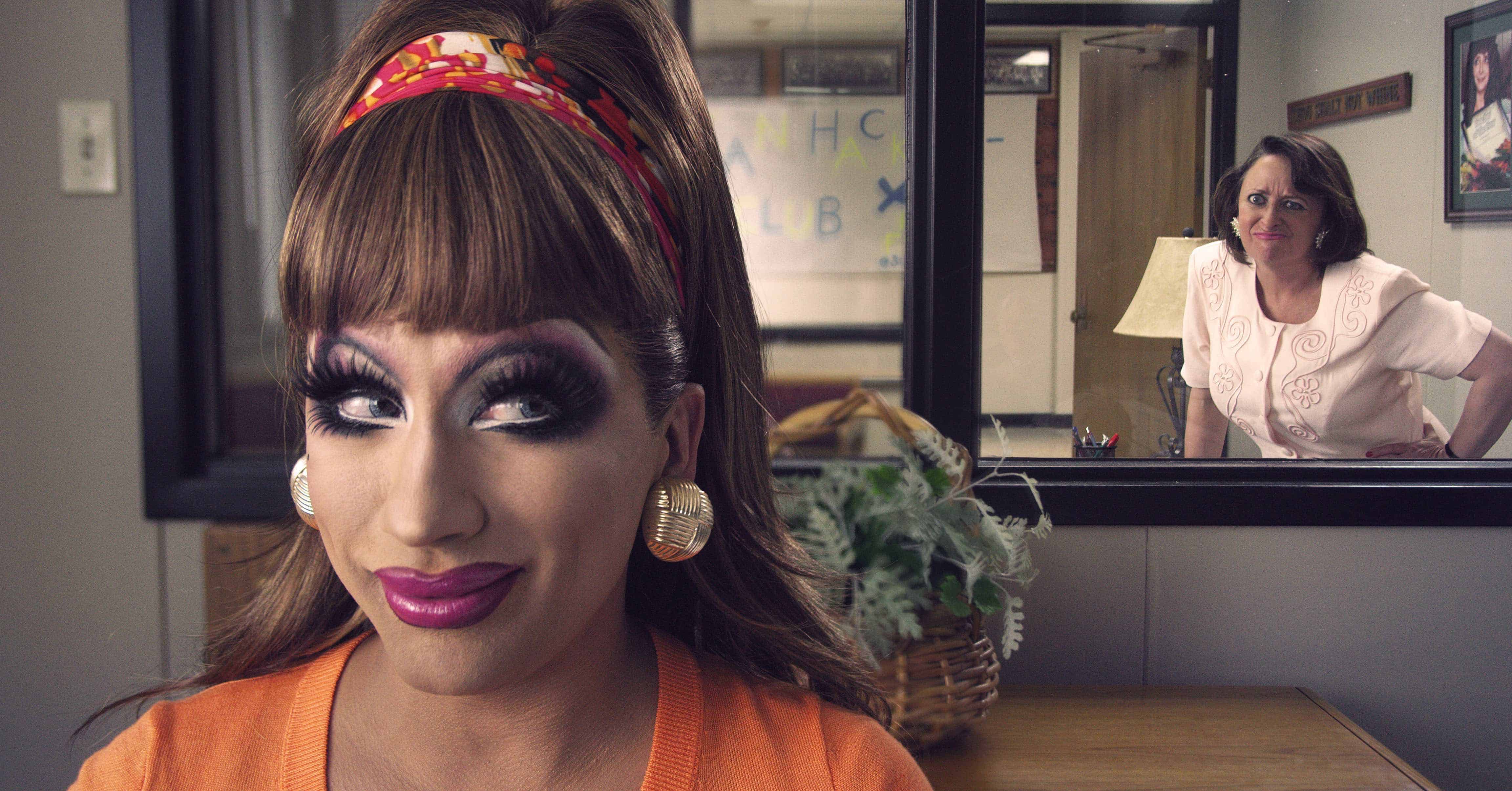 As I waited for my  interview to begin, someone approached me asking if I would like a glass of water or  cup of coffee. I asked for an incontinent pad instead, as I had never been this giddy to see another drag queen. It was finally my turn to meet the queen of mean, Bianca Del Rio, who was joined by the director of her new film, Matt Kugelman.

Drag queen revenge comedy, Hurricane Bianca, is set to premiere at the Inside Out LGBT Film Festival in Toronto on Friday, June 3rd. I had so many questions, I jumped right in!

Daytona Bitch: Who is your favourite drag queen?

D: Other than Ru Paul.

B: Ok, I love Ru Paul for a lot of reasons though. Highly underrated is Lady Bunny. Truly one of the sickest individuals. I have a video of her on my phone applying her makeup with a French fry for fifteen minutes. It’s like watching that gorilla that attacked that child. I just sit back and say, “This can’t be real.” Lady Bunny is by far my favourite. I’ve met many queens, but she is so special to me. Period.

D: You were fucking amazing on Drag Race.

B: It’s been a great ride. I mean, it’s a golden ticket. But you also realize you’re seeing [the producers’] version of it. It’s different when you’re experiencing it. By no means was it a bad thing. There were some really great talented people on that season. It’s great to be in the company of Courtney and Adore. And Darian is amazing too. But we’re all very different. You’re kind of in this boot camp with everybody else, but your don’t get to hang out with each other. You know what’s going on. But you don’t know everything.

D: What do you do in your down time?

B: I like to shop on Amazon. Because when you can’t find anything to watch on TV in whatever country you’re in, you can always go on Amazon and order stuff. But the one show I find everywhere is Forensic Files. I’ve seen every episode. So I’m hoping some more people get killed so I can see some new material. I say to myself, “Oh wait I know how she dies. She gets killed in the kitchen with the frying pan.”

B: Sometimes it’s not what you’re making, but who you’re making it for. I designed a lot of stuff when I was younger in New Orleans for ballet theatre and opera. But then when I got to New York, I got to work for a Broadway costume company. So the excitement was always there. When you’re building designs for Angela Lansbury or Patti Lapone or Cheeta Rivera, that’s when it’s exciting. We did a lot of Elaine Stritch’s personal clothing, which was crazy. We used to change the straps on her bras. We used to take her white shirts she’d wear with no pants, and we’d take the collars off, because the collars would get full of makeup. She was paying a costume house $25-30 dollars an hour to replace these, when it’s cheaper to just go get a new shirt. That’s Elaine. She was very funny. Everybody hated her. But I loved her.

B: Whenever you see a straight guy come into a club, they’re always so concerned when you’re a drag queen and you ask if they’re straight. They’re like, “I’m straight, I’m straight.” I’m not recruiting. What’s the worst that can happen? I mean it’s all fun and games until you get a knuckle full of puddin’. And that’s why I don’t fuck with straight guys.

B: Then I can relive it later.

D: So romantic of you.

D: What was the most challenging part of making Hurricane Bianca?

B: The workload, and the timeline. We didn’t have any money so it was so compact. There was this one day where we were like, “I don’t think we’re going to get to this scene today.” And then we have extra time, and I’d be like, “Hi, remember when I said we weren’t doing this scene? We’re doing it now.”

I’d get angry with myself for not knowing everything I could possibly know. I come from a place in theatre where you learn the script from beginning to end. And something brilliant Rachel Dratch taught me was she would look at these two pages literally fifteen minutes before she’d go on. I thought that was impossible. But I started doing it and was like, “Oh that works.” Because you’re not retaining it for longevity, you’re just retaining it for that moment so it was great not to fill your head. When you’re on Saturday Night Live, you’ve got to learn that real fast.

B: Right now, I don’t want to hear “Trump” or “election.” I hate the words “spoiler alert.” I can’t take it with these people on social media. I’m not telling secrets from Game of Thrones or anything. I’m supposed to stop my life in New York because someone in San Diego hasn’t seen it yet. You have the time to go on social media and write “SPOILER ALERT,” so get the fuck off your phone and watch the show, and then we can discuss it.

D: What do you hope people take away from this film?

B: What’s good about this film is that it deals with a serious topic, but it’s done in a very comedic way. It’s never too preachy. I find with any LGBT film it’s either completely heart wrenching and horrible, or it’s not funny, completely ridiculous, camp, foolishness. This falls in between because it deals with a serious topic. In 29 states in America it’s legal to be fired for being gay. And I don’t think people realize that. That’s what’s happens to this character who is passionate about his job, who goes to this small town and gets outed. I think 50% of him wants to continue teaching but the other 50% wants revenge against everyone, so he turns himself into Bianca to come back and make everybody miserable.

I don’t suggest that if you get fired you should come back with a wig, and attack the town. I hope that people can see it for what it is and realize it’s pretty fucked up that that can happen in America. How can someone say, “You’re gay we don’t want your kind”? That’s nuts and legal.

D: How do you feel about Bio Queens or women who do drag?

B: Do whatever you want. I think there are no rules. I didn’t realize that many existed until I travelled to England. There were quite a few of them [there], and they were lovely. They can sing, and they wear tons of make up. If it were up to me everybody would bottom eyelashes. Everybody would were white eyeliner. Nobody wants to go to a show where everybody looks the same and everybody’s doing the same talent. And sometimes you need those people who look different to make you look better.

B: Evita. I don’t know why. I think because it starts with a funeral.

B: Depends on the day. Like if I was in drag, you want to let your balls have a minute because you’ve abused them the night before. Sometimes if it’s hot outside, you’re tripping over them so you gotta wear briefs.

D: I knew you were gonna say that.

B: I don’t give a shit about that.

B: Money. You have to work.

B: I like fall, you asshole. Those are the two reasons I left New York – the summer and the winter.

B: Swirl. Once I went to this Chinese restaurant and we were sitting there with my friend and I went to the buffet and they had one of those little ice cream machines. I don’t care how old you are, when you see an ice cream machine you get very excited. So I went up and I’M WAITING. And I’m just looking at the machine and one side said chocolate and the other said vanilla. And I’m like, “I don’t know!” I’m just standing there mumbling. And there’s this little woman behind me and she goes, “Swirl.” It was a beautiful suggestion. That’s what drag is to me. A swirl.

D: Thank you very much.

B: Thank you very much Daytona Bitch, that’s a great name.

D: Thank you, it was my grandmother’s.

Hurricane Bianca screens at Inside Out on Friday June 3rd at 7:45 and Sunday June 5th at 8pm. Aaaaand, it’s just been announced that the film was pick up by a distributor, which means that if you don’t get a chance to see it this weekend, you’ll be able to catch it in fall/winter of 2016.