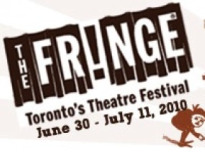 By Monica Heisey
Ah, the Toronto Fringe Festival- that wondrous and exciting theatrical crapshoot—is upon us again shortly, as the city hosts a plethora of theatre and dance performances, some of which will be picked up by Mirvish, or move on to popularity in New York or London, some of which will provide an enjoyable and cheap night out, and some of which will be the weirdest shit you’ve ever seen, for better or for worse.

With over 140 shows going up this year, here are some I’ve pegged as a great night at the the-aaaaa-tre (said in a long, slightly snobbish drawl—practice at home!).

2-Man No-Show
The Toronto-based comedy duo Ken Hall and Isaac Kessler return to their hometown after a critically acclaimed assault on festivals the world over. Their high-energy brand of comedy was the audience choice at the New York Frigid Festival, and both the Critics’ and Patrons’ Picks at the Chicago Improv Festival. At the George Ignatieff Theatre.

Almost, Again.
A couple in that almost-a-relationship phase agrees to wait until that first ‘moment’ is absolutely perfect before dating in earnest. A sweet and sincere comedy by Briana Brown. At the Factory Studio Theatre.

Amy Zuch’s Key to Key
A combination of Disney, The Biggest Loser and a one-woman show, Amy Zuch tells the true story of a young animator getting back to reality—conquering OCD, ditching her animated friends and 60 extra pounds along the way—through animation, song, live drawing and scenes. The kicker? The true story is her own. At Royal St. George’s Auditorium.

Cactus: The Seduction…
Created and performed by Aussie native Jonno Katz, this award-winning comedy was referred to as ‘both Brechtian and pant-wettingly hilarious’ by Eye Weekly’s 4 ½ star review. The title alone spiked my interest. At The Solo Room.

The Carnegie Hall Show!
National Theatre of the World’s Matt Baram, Naomi Snieckus and Ron Pederson (last year’s Canadian Comedy Award winners for Best Improv Troupe, they’ve been nominated again this year), are bringing the show’s infectious silliness and campy glamour to the Fringe. In full black tie, they will join with Chris Gibbs and Jeff Raimondo to improvise some sass and sparkle into the mundane. At the Factory Theatre Mainspace.

The Complex: A Toronto Tale
Inspired by interviews with real Torontonians, this play centres around a building fire and its effects on Toronto life. Told through the memories of four survivors of the fire, director Jack Grinhaus and his cast explore ‘what it means to be Torontonian: what binds us and what tears us apart.’ At Walmer Centre Theatre.

The Domino Effect
I love that the Fringe celebrates a spectrum of theatrical expression, producing shows with song and dance and improv and sketch elements and who knows what else. The Alias Dance Project teams up with Solid State Breakdance and Valerie Calam to create a contemporary urban dance showcase that will blow your mind. At the Tarragon Theatre Mainspace.

Everybody Panic!
Toronto sketch comedy veterans combine to create a show about ‘real life issues’… you know, like the future, monsters and the apocalypse. At the Helen Gardiner Phelan Playhouse.

Everything You Ever Needed To Know About Women: For Dummies
While the title sounds kind of gimmicky, the description for this piece won me over: “three of Toronto’s top spoken word artists … tackle the myths and realities of what men think, and actually know, about women (which may or may not amount to a whole lot.)’ There’s a guy in this show named Leviathan Grant… I’m sold. At Royal St. George’s Auditorium.

It’s Raining in Barcelona
Originally written in Spanish, the Fringe run represents the Canadian premiere of this drama set in Barcelona. Dante-obsessed prostitutes hunt clients in museums under the employ of cheeseburger-obsessed pimps. Death-wishes and chocolate abound. At Theatre Passe Muraille’s Mainspace.

Kissing Swinburne
Puppets! Masks! Interactive Multimedia! Sadomasochism! These elements and more are used to explore the world of Victorian poet Algernon Swinburne and his love-struck traveling companion. Any show involving ‘lascivious puppets’ is alright by me. At the Bread and Circus.

Life Games
A collaborative creation about the games we play in life—from hopscotch to ‘hard to get’. Involves dancing, thought-provoking explorations of what it means to be human, and jumping jacks. At the George Ignatieff Theatre.

Maude-Lynne Sells Out!
An eccentric—and broke—young lady auctions off her collection of oddities and Victorian literature. A comedy about real love, real estate, and really old stuff. At the Factory Studio Theatre.

Misadventures of a Massage Therapist
Jason Brasher’s life for the past seven years has involved nipple rings, tin foil homes, sex, pranks, SHARTS, more sex, and massage therapy. He tells you stories about those things and more that have literally made people pee themselves. Bring an open mind and steel your bladder for a workout. At the Annex Theatre.

Phone Whore
This Boston offering from Cameryn Moore and director Elizabeth Dupre chronicles a few days in the life of a phone sex worker. Truth, taboo, and I imagine a fair deal of trash talk, collide as Moore challenges social and sexual norms. At the Annex Theatre.

Pick of the Fringe!
Three Second City alumnae bring the funnies in a comedy revue about ladies and gents. Presented by ‘Punched in the Box Productions’, you can expect to be punched… in the laugh box? The point is, it’s going to be a hilarious show. At the Factory Studio Theatre.

Short Story Long
2010 Fringe New Play Contest Winner. When famous author Lincoln Kennedy dies, his written will forces his mistress to confront his widow. Somehow this works out comedically—see how! At the Tarragon Theatre Extraspace.

Teaching Shakespeare
English majors will appreciate this send up of a typical college level Shakespeare class. With two runs in New York, a slew of festivals and a television special on BRAVO! Under its belt, this parody class got an A+ and hasn’t been in Toronto since 2000. At Tarragon Theatre Extraspace.

The Shakespeare Show: Or, how an illiterate son of a Glover became the greatest playwright in the world
Confession: I’m really into Shakespeare. I find his stories (and life story) fascinating and I like to see theatre practitioners interact with it. That’s why this is on the list. At the Bathurst St. Theatre.

The Whores
A series of uncut, unflinching interviews outline five women’s experiences as sex workers in Halifax. The stories of the monologists weave together to reveal the intricacies and idiosyncrasies of the oldest profession. At the George Ignatieff Theatre.

Under Analyze Me
Young choreographers Aria Evans and Candice Irwin premier four dance works that centre around technology, and how we relay on it to avoid human contact. At the Helen Gardiner Phelan Playhouse.

Vagina Dialogues: the Musical
Any show that has the audience warning “Dancing Vagina” in its description is a DO NOT MISS. At the Annex Theatre.