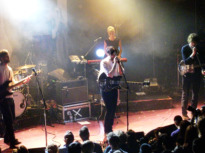 Shout Out Louds Don’t Hold Back at the Mod Club

Cute, accordion – playing blondes, obscure percussion instruments and a lead vocalist with a hair flip to rival Justin Beiber’s? If this doesn’t sound like a recipe for arousal, then I simply don’t know anything. Aside from these superficial turn ons, the band that emerged from Sweden in the early 2000’s rocked the Mod Club with firey fervour Saturday night.

The Shout Out Loud’s triumphant return to the city for the first time in over two years was accompanied by Freelance Whales, an experimental five piece group from Queens, New York. Their opening set started early in the evening and saw only a fraction of the crowd that would make it out for the main act. It was 7:45 p.m. when I got there and I caught only a couple of their percussion laden songs. It’s clear that Freelance Whales like banging on things with other things – and they do it well. Their set was impressively tight, and they covered a Broken Social Scene song incorporating a variety of peculiar instruments.

When the crowd was sufficiently simmering for the Shout Out Louds, the band graced the stage with 1999 from their newest, (and most underrated, if you ask me) album Work. The energy kicked into high gear about halfway through the show, when the band hammered out The Comeback, and then people started moving. At this point, Adam Olenius jumped into the crowd and had a bit of trouble getting back on stage, which was kind of charming.

One thing I really approve of when it comes to Swedish bands is their miraculous sense of style. There were definite aesthetic connections between the Hives insofar as the men were unassuming, and yet so damn coordinated. Bebban Stenborg, the sole female of the group, was pretty much a picture of panache and grace and I give her snaps for her ability to play keys, tambourine, glockenspiel and the accordion in armadillo shoes.

The show was finished off by popular jam Very Loud in an epic conclusion that would have converted any skeptic into a fan. I later learned that this show had been sold out long beforehand, an indicator that Shout out Louds fans are still unwaveringly persistent and dedicated. With producer Phil Ek (Fleet Foxes and Built to Spill among his projects), on their team as of 2010, prospects are looking bright as ever for this impressive fivesome. On top of that they are generally a really sexy band. They gave off a vibe Saturday night at the Mod Club that was more than a little haunted.