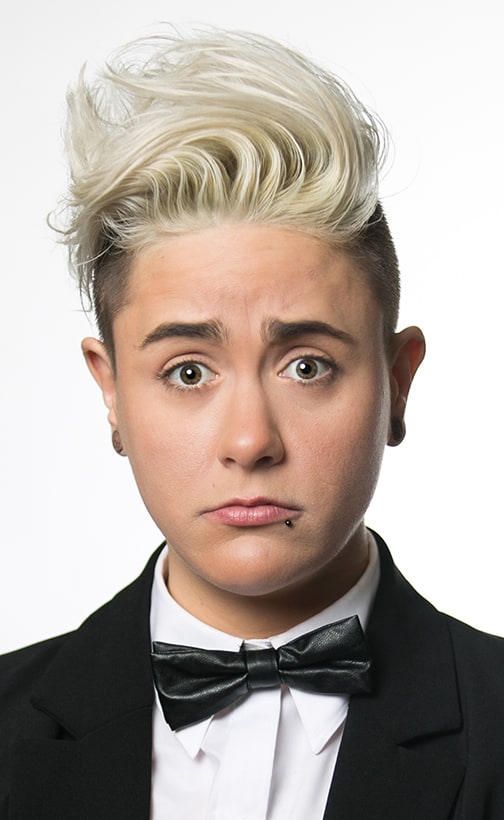 We’re catching up with a few local semi-finalists. For this installment, we chatted with Chanty Marostica.

CM: I was obsessed with Robin Williams as a kid. I loved watching him, Whoopi Goldberg and Gilda Radner on stage. All completely different beasts, all uniquely brilliant entertainers, but equally PURE FUN and always over the top for a laugh. I wanted to be that. That type of funny, that type of thunder as a person, that kind of bright soul that they all are so that I could also make people around me feel the way they made me feel. Just HAPPY.

When I was thirteen I had a lot of trouble with the law. I was caught spray painting at the pier one night and avoided arrest by agreeing to clean the graffiti as part of my community service hours. I eventually befriended a young orca whale who I had the opportunity to train with the guidance of a professional trainer. I put months of work into that whale. But I knew…I KNEW he belonged in the ocean. The ocean CALLED TO HIM. All captive animals deserve freedom. So we trained and trained and trained on this one trick jump, and instead of performing it in front of a live CAPTIVE audience, we performed the jump for ourselves and I helped him JUMP BACK TO THE OCEAN.

Wait. That was Free Willy…

What was the question again?

What did you excel at school…why?

DRAAAAAMA. I was terrible in school. Undiagnosed ADHD and being a SUPER closeted GAY doesn’t make for a cool high school experience, but Mrs. Maddocks made it so I could always be ME in her class. She taught me improv. She taught me sketch. She taught me timing. She taught me that bullies grow old but never grow up but that I would, and she instilled in me that when I did grow up, I’d be something to look out for.

I don’t know if I was good at drama; it was just so good FOR me. I’m sure I got the best grades in that class because it was the happiest I’d ever been in those four years of my life.

When I stopped caring what my parents thought of me. My parents’ validation was my everything my whole life. I never did anything after coming our as gay (nineteen-onward) unless they knew about it. When I came out as non-binary and started to really think about myself and my choices and WHY I put such high stakes on their approval, I realized they love me no matter what and one day they’ll be gone, but one day I’ll be the only person who needs to be proud of me. So…best to start now so they can see that I’ll be okay…OH MY GOD, MARILYN. NEVER LEAVE ME.

WOOOF. I’m thirty-four. I feel like I’m always the oldest person on stage (with the best skin), which CANNOT be true, right? RIGHT??? What’s the best thing about my current age? I’m not thirty-five. Yet.

No! Age is a gift! I like my current age. I felt a shift in my thirties–like I’d arrived. Thirty-four is when I let myself be me and came out to myself as trans. So it will forever be a defining year of my life.

I got locked out of my house for three hours in the pouring rain two weeks ago and I don’t believe in myself as a survivalist or a person to survive the apocalypse anymore. I was fine. I just can’t be bothered. If the end happens, my dog Sprocket and I will watch Futurama until the sweet embrace of death beckons us TO. OUR. GRAVE. Fuck walking in wet shoes and being dirty on purpose. RIP ME.

How people gender me. I’ve felt my whole life like I was impersonating a woman, yet I was “misgendered” as male my entire life. When I finally see the forest through the trees and come out and try to present as my most masc self, I’m seen as a woman more than ever before. I honestly feel like the more comfortable you are with being the gender you were not assigned at birth, the more that defies how people WANT to see you. They grind hard against it to let you know that you’re an imposter. They’re selling you groceries, or serving you a sandwich, or opening a door for you, but they’re letting you know they SEE YOU. I’m not an imposter. And honestly, read a book, bud. Trans people have been here before you and your parents and your parents’ parents, so catch the fuck up.

There have been so many, but a moment from last week sticks out hard in my brain. A group of men started talking SO LOUD on purpose every time I stared to speak. Every time I opened my mouth, they made it this fun game where they wouldn’t even be saying words, but they’d be speaking louder than me. It was so confusing. The host had told them to keep it down, then brought me right up, and they DID NOT LIKE THAT. So they made it their mission to make my set a living hell.

I never get mad at my audience. I treat hecklers with kid gloves and I LOVE my audience, but these guys…I finally had enough and told them, “Listen guys, you’re being SO rude. I’m sharing my experience as a trans person, and it’s super vulnerable and not always a safe space for me. I’d appreciate if you could let me say my words so I can tell my truth and my jokes.” And this dude looked me square in the face with the meanest smile I’d ever seen and said, “Sure, you’re trans. Good for you. What a feat. AMAZING. Why don’t you try being trans AND being funny.” They were escorted out shortly after. No one cared what they’d said to me. They were kicked out for being disruptive. I wish they’d stayed so I could’ve looked them in the face off stage. There’s something that dehumanizes you to an audience when you’re on stage, but hecklers aren’t so big when you’re a real person looking THEM square in the face.

I can sing. I can DANCE.

I sing quite a bit in my act because it always made my grandma really happy to hear my singing voice when she came to my shows, and I would and still do whatever Irene wants!

A talent that I don’t share on stage, though? I can PAINT, bro. I mostly paint to ease my anxiety, but I love it, and I’m good at it. Art and junk…it’s def in my wheelhouse.

PERF Saturday? Picture it: Toronto 2018. I’m TRIPLE booked and I’m scattering with producers to get me in and out on time so I can do as many spots, as many stages, as many sets as possible. Nothing makes me happier than being on stage, and I’m in VALHALLA when I’m busy on a Saturday. Weekends don’t exist for comics.

I always feel like a weird concerned dad on the weekend. Best to keep me on stage where I can’t question other people’s choices.

I’m BELIEVE IT OR NOT pretty high-strung, so my chill days are my days off, and I just take the day to Netflix and cheweenie with Sprocket and whatever terrible horror movies are added to Netflix that day of the week.