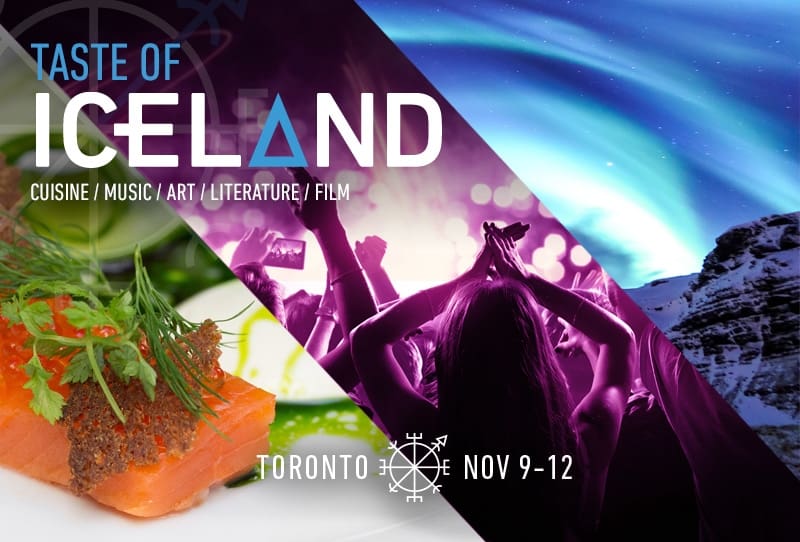 Shedoesthecity’s Top 4 At Taste of Iceland 2017

It’s always a treat when November rolls around because it means Taste of Iceland is here! Iceland Naturally‘s celebration of all things Icelandic showcases the Nordic nation’s spectacular cuisine, music, art, film and literature. And if you’re concerned about your wallet – don’t fret. Most of the offerings in this year’s festival are FREE.

Here are some highlights to check out over the four-day festival, running November 9-12.

Icelandic Menu at Leña (176 Yonge Street): Helmed by Canadian and Icelandic Chefs & Mixologists (including Viktor Örn Andrésson and Kári Sigurðsson), feast on a four-course menu including Grilled Langoustine, a Mosaic of Arctic Char, Leg of lamb with forest mushrooms and arctic thyme yellow beets, along with your choice of Icelandic Skyr or Warm icelandic donut. Make your reservation here.

Reykjavik Calling at the Horseshoe Tavern (370 Queen St. W): This free concert will feature Fufanu (whose new album Sports just dropped in February) and Mammút. They will be joined by Toronto’s Ice Cream, and radio host DJ Mar Sellars. Admission is free on a first-come, first-served basis, so be sure to get there early!

On Iceland’s Thriving Contemporary Art Scene at Spoke Club (600 King St W): On November 11th, find out how Iceland’s relatively small population (340,000) is able to sustain a thriving contemporary art scene. Björg Stefánsdóttir, director of the Icelandic Art Center, will be leading the discussion. Attendees will also get to try signature Icelandic cocktails during the event. This event is free.

Stockfish at the Royal Cinema (608 College St): The Icelandic film industry’s premier festival, Stockfish, is screening its short film program on November 12. You’ll enjoy six short films, including Stockfish 2016 winner Like It’s Up To You from director Brynhildur Þórarinsdóttir. Again, admission is free and granted on a first-come, first-served basis, so come early!

See full listings and snag your tickets (where applicable) here.

Our Pick of the Week: Taste of Iceland