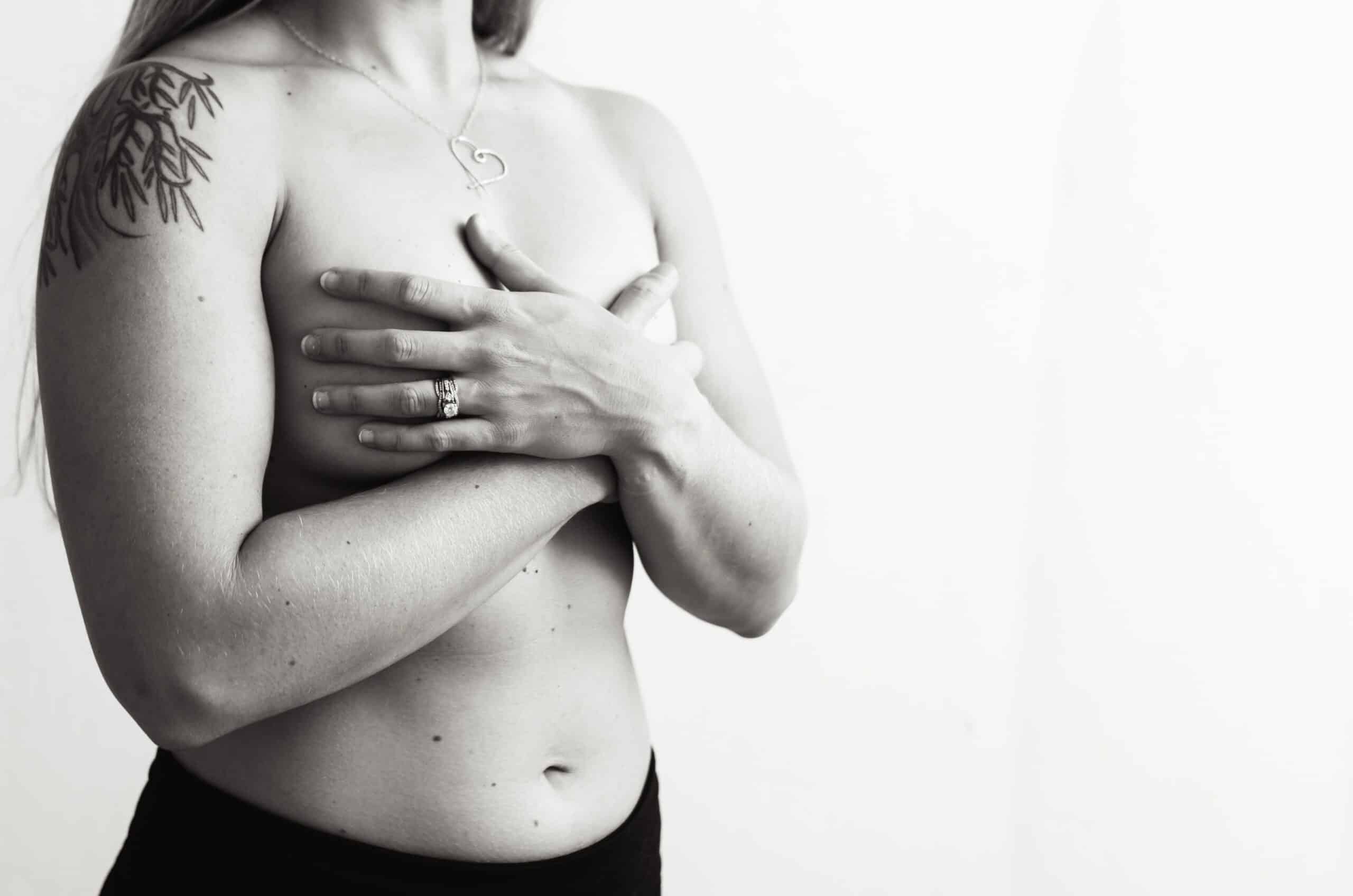 What do you do when a piece of your body, one so often held as a societal canon of feminine beauty, is physically stripped away from you? When malignant cells tear their way through your sanctuary, what do you do with that exposed, vulnerable feeling? When your body, the thing you’re meant to understand more than anyone else, does not reflect back in the mirror the way it once used to, how can you recover?

That foreign reflection staring back at the beholder is known well among many women. One in eight Canadian women will experience breast cancer within their lifetime, many of whom have to sacrifice a piece of themselves via lumpectomy or mastectomy— surgical procedures that remove either part of or the entirety of the breast — in order to survive. But after the deadly cells are carried out with a piece of their womanhood, many breast cancer survivors are left wondering what to do next. With surgical trauma and severe body dysmorphia looming over their heads due to the drastic and abrupt physical change, these women are often told to be content with just being alive.

Fortunately, some people have a wonderful way of taking pain and turning it into beauty. With the recent advancements in 3D and hyper-realistic tattooing, many tattoo artists have taken that practice to the breasts of those who’ve had mastectomies and reconstructive surgeries. By permanently painting on brand-new nipples to those who have lost their own, tattoo artists like Evelyn Bacopulos at Bellwoods Tattoo are able to provide a sense of self — a sense of normalcy — to her clients. By giving back the closest thing to the nipples they once had, it can turn a reminder of what they have lost into a symbol of what they have overcome.

Bacopulos’ brutal introduction to the breast cancer world came when her mother was diagnosed with the disease before she even began her tattooing career. While helplessly watching her mother battle — and eventually defeat — her illness, Bacopulos felt like she had her hands tied behind her back the entire time.

It wasn’t until years later, when she was a decade into her tattooing practice, that she realized she could metaphorically cut her hands free and use her artistic talents to benefit the people who share a similar experience as her mother — the same people who are left to fend for themselves amid their miraculous survival. Now, with five years of areola tattooing behind her, the tattoo artist feels as though she is making an impact in the world of breast cancer after-care — a diverse specialty that still has a long way to go.

But what exactly is areola tattooing? While the name may be self-explanatory, the process can be detailed and lengthy.

Bacopulos walks through every step with her clients, starting with a short, now-virtual consultation that will lay the groundwork, taking into account the client’s reconstruction and scarring, for the tattoos to come.  She then collaborates with them on the colour palette, sizing and placement of the tattoos, often sketching right onto the client so they can get a realistic idea of what the end result will look like. The tattooing process only takes about an hour and a half to complete.

As opposed to cosmetic tattooing, which can be compared to practices like microblading for eyebrows that often fade within a couple of years, Bacopulos’ practice uses traditional permanent tattooing methods. “I think it’s important when tattoo artists do it,” explained Bacopulos. “I think there’s something a bit more special that we can bring to it.”

While Bacopulos’ many nipple tattoos are a solid testament to the impact her work has had on breast cancer survivors, the stories of her clients offer a deeper level to the transformation she’s making in the lives of those who could not connect with their bodies for so long.

Adriana Capozzi exhales shakily as she composes herself, her mind and her body, recalling the countless days she spent staring into her bathroom mirror, not recognizing the person staring back. She remembers blinking at the foreign entity in front of her, stripped away by chemo and radiation and surgery, morphed from the medicine doused into her veins and worn down by the stress that seeped into her bones, and wondered when or if she was going to feel whole again.

Now, almost five years later, Capozzi finds herself staring in the same mirror, not out of disgust or shame, but in admiration. Her areola tattoos, replacing what she lost in battle, effortlessly play with light and angles to create an illusion that makes Capozzi feel like herself again. Crediting her newfound confidence to Bacopulos, Capozzi is able to mark an end to her struggle and a beginning to the rest of her life.

“There’s not a lot in terms of what’s commonly recommended aside from just surgery and recovery,” said Dr. Haylee Clarence, a naturopathic doctor at the Clara Clinic who, like Bacopulos, found her passion for cancer care by witnessing her family members struggle with the disease.

While it is vital to keep fighting for proper accessibility in the after-care field, it is also important to note that breast cancer after-care is an umbrella term that covers both physical and mental wellbeing. “Unless patients go through the occasional program that is almost like the mental health side of it, the after-care just typically looks like surgery, recovery, scars that need healing, and that’s kind of it,” noted Clarence.

And if cancer survivors do decide to do their own after-care research, the information out there is extremely broad and disorganized. “Unless the women are told about reputable websites that can help you, they’re just scrambling and getting junk,” explained Dr. Ellen Warner, a medical oncologist and founder of PYNK, a not-for-profit breast cancer program that provides cancer resources to women under 40. PYNK collects these resources from reputable cancer organizations on the internet and guides women to them.

The consistent after-care accessibility issue in Toronto is not only caused by informational barriers, but financial ones as well. While OHIP covers reconstructive surgery for cancer patients above the age of 30, other after-care treatments such as areola tattooing from private businesses like Bellwoods Tattoo are left in the dust.

“We really want to make this service accessible through OHIP. There’s a lot of red tape that we need to get around, but this is something we’ve been working on for a couple of years now,” Bacopulos noted, discussing the long road still to come. “My biggest takeaway from areola tattooing is that I wanted to make it more accessible to everybody, I wanted to give a better quality tattoo, bring the artistry into it.”

“It’s so unfortunate because, like I said, we didn’t choose this life,” expressed Capozzi. “This was handed to us. None of this was done for aesthetic reasons, so it really should be covered.”

While physical healing is an essential part of any recovery journey, proper access to mental health resources is just as significant in the healing process for these cancer patients. “For lots of women, how they look physically plays a huge role in how they feel internally,” Clarence explained.

And although recreating the breast through reconstructive surgery allows survivors to gain some of their confidence back, it is the little details like areolas that can help them fully reconnect with their own bodies.

“I thought reconstruction would have given me [my confidence] back and it really didn’t. It gave me so much back, but I still wasn’t able to look at myself in the mirror … I just felt so robbed,” Capozzi admitted. “So the second I got [my tattoos], I looked at my body and I kind of loved it. I love what it’s gone through.”

Olivia Wiens is a journalism student at X University (formerly: Ryerson University) and has been writing since she learned how to pick up a pen. Originally from the prairies, Wiens likes to find the beauty and artistry that every Canadian province has to offer. She is constantly seeking out people whose stories don’t get told and aims to bring them into the light. You can find her on Instagram @olive.wiens and on Twitter @oliviawiens.