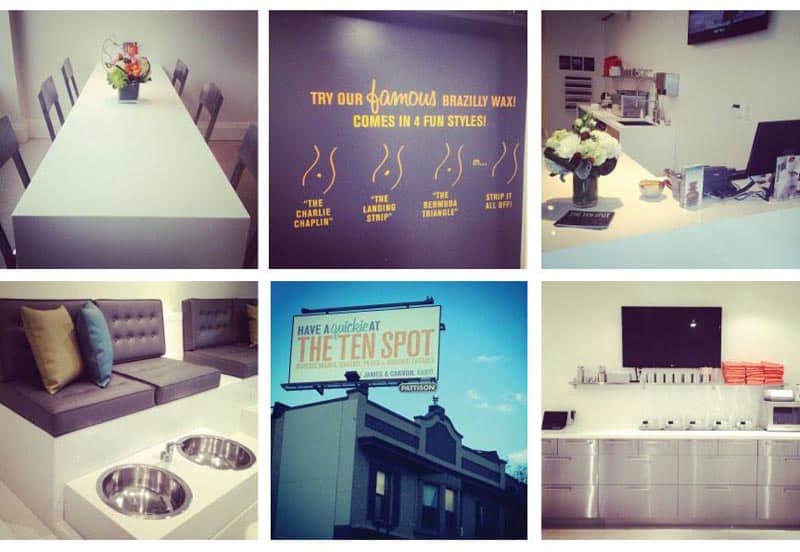 Ten Spot Brazilly: one of the most productive experiences a gal can have with her pants down

It took me 27 years to get a Brazilian wax.  In a way I’m glad I waited because it was magical.

But first, I should probably tell you that I’ve been in a relationship for the past 9 of those years. During the first 6 months or so, I tended to the bush properly. I would get the occasional wax (just a little off the sides, please) and was fairly consistent with upkeep. Then, I got comfortable and stopped caring. Boyfriend was, and remains a ‘recovering Hippie’ and couldn’t care less. So, why bother right? As a result, I now had an extra hour to watch ground breaking television shows like America’s Next Top Model: Cycle 41 (remember, this was 9 years ago). I counted my lucky stars and never looked back.

That is, until the last year. I kept hearing whispers about the amazing TenSpot Brazilly. Ladies, who I love and respect, were paying their hard earned cash money to have all of their downstairs carpeting mercilessly ripped off by a stranger. And they were coming back for more. WHAT?

I was sceptical, to say the least.  But, I decided that it was time for a renovation and that I needed to experience this sadomasochistic ritual for myself at least once. Maybe it’d even shake up the ol’ love life, I thought. I booked an appointment with Ashley at the Queen Street location of the Ten Spot and hoped for the best.

When I got there, things were familiar yet different. Firstly, the space itself has changed since my last visit YEARS ago, but the crew of ladies who greeted me remained super friendly.

Next, I was escorted to the torture room. It was less chains and discarded bones than a spacious expanse with minimal but effective décor and a television mounted on the wall playing “Friends.” Before I could wonder about Jennifer Aniston’s waxing preferences (she seems like a landing strip gal, I don’t know why), it was go time.

There was talcum powder, there were wooden sticks and hot wax. I kept waiting for it to get uncomfortable, awkward or painful, but it was none of those things. Ashley was great – we chatted, we laughed – and then, just like that, the deed was done, and my box was free and lovin’ it. A fall clean-up I could definitely get used to.