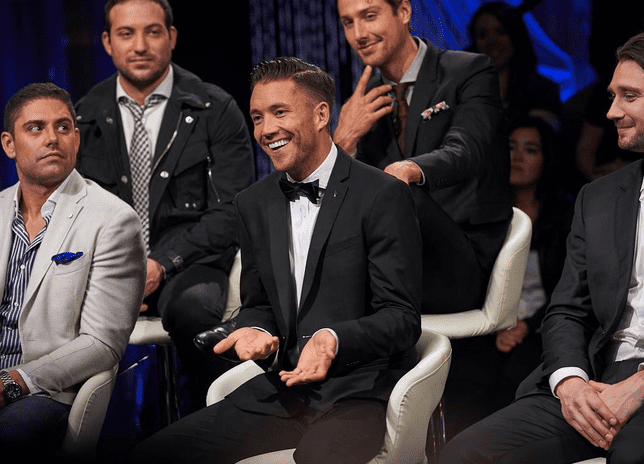 This week we enjoyed the penultimate episode of The Bachelorette Canada, AKA “The Men Tell All.” On “The Men Tell All,” the show brings back the season’s twenty suitors (with the exception of the final two) to gossip, and to ask Jasmine any lingering questions they might have about their failed relationships with her. All in all, it’s an anti-climactic follow up to the drama of the Fantasy Suite, and it’s a frustrating delay before the finale. As you may be able to tell, I did not find this a satisfying installment of my favourite Canadian reality TV series.

Of course, one person who did not seem annoyed by “The Men Tell All” episode was host Noah Cappe, who was given the opportunity to do something besides wear suits and hang out awkwardly at Rose Ceremonies for once. This time, he interviewed Jasmine’s bevy of exes, including Chris (who still feels misunderstood because he is “quirky and “weird”), IRL Zoolander Thomas, and Benoit, who claims he was so handsy because he was drunk the entire time.

The most compelling conflict came when Chris confronted Drew over an incident that allegedly transpired over luncheon meat one day. Apparently, Drew was famished and wanted to take some of the crew’s food while shooting. In response, Chris had words with Drew at the time. For some reason, both men seemed to believe this banal story was worth discussing on national television months later. It was all adorably quaint and Canadian compared to the literal brawls that erupt on the show’s American cousin. As a nation, we seem to lack the skill required to build real tension between rivals on reality TV.

Possibly even more Canadian was the moment when Drew, who was constructed as this season’s villain, apologized to Jasmine for his behaviour on the show. Drew was cast as the villain because he swore sometimes, seemed interested in leveraging fame to promote his business, and was probably not there “for the right reasons.” Jasmine admitted she wasn’t sure if Drew was genuinely apologetic, or just seeking to “save face,” but they seemed to end things on civil terms nonetheless.

Having said all this, there was one genuinely moving moment on this week’s episode. When Jasmine was confronted with Mike, the firefighting paramedic who won The First Impression Rose, the dude got vulnerable. With a sad, puppy dog face, Mike explained that, while he had waited too long to profess his love for Jasmine when he was still competing for her affections, he was in fact in love with her the whole time. He said he still loves her too. Mike then respectfully wished Jasmine the best with her final two men, acknowledged it was not his job to choose her destiny, and declared his allegiance as her friend. Swoon!

After seeing him skillfully navigate his relationship debrief with Jasmine, I truly believe Mike ought to teach a course on how not to be a douchebag to one’s exes. His respectful attitude was exceedingly sexy to me. In fact, I’ll be in Winnipeg for work this weekend, so Mike, I’m free if you would like to meet up for a cold beverage. I have Twitter. You can DM me!

Ultimately, this episode was merely a dull prelude to the real prize, next week’s finale. In a matter of days, we will watch our girl Jasmine choose the man she may marry (though not necessarily, if the American version of the show is anything to go on). I’m waiting on tenterhooks, dear readers. Ultimately, I predict she’ll pick the soulful and sweet Mikhel over Fireman Kevin with the aggro family.

What about you? Any predictions on who will get Jasmine’s Final Rose?