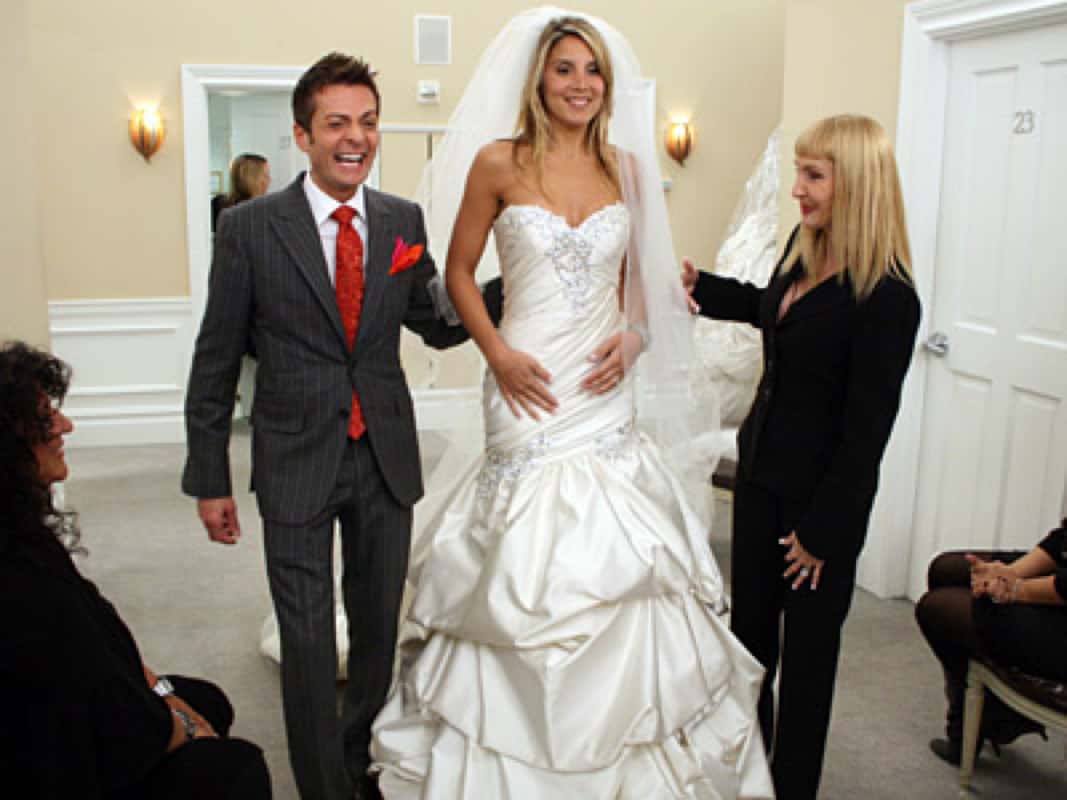 The Feminist Wedding Diaries Entry #3: I Said Yes to the Effing Dress and It Was One of the Most Empowering Experiences of My Life

Planning a wedding has taught me how much misogyny I have actually internalized. A fitting example of this is how I reacted when my mom suggested we go to Kleinfeld’s at the Hudson Bay Company on Queen Street to look for my wedding gown. My precise reaction was, “OH MY GOD, MOM! WHY DO YOU THINK I AM A BASIC BITCH?” Then I proceeded to check myself!

The truth is, whether I realized it or not, I didn’t want to go to the Kleinfeld’s chain because I associated it with Say Yes to the Dress, which I in turn associated with that epithet, “basic bitches,” which basically just means I associated it with traditional femininity. Did I think that I, a self-identified woman, was somehow above what OTHER women liked? I’m ashamed to admit I did.

After some cajoling on the part of my mother, who assured me Kleinfeld’s had a great deal of selection, I agreed to go. “But no way will I ever get my dress there!” I insisted, “I’m just going to figure out what I DON’T like.” That is honestly what I said to my friend J. on August 23rd before I went. Damn, I hate August me.

Here’s the thing, the very term “basic” is a form of misogyny. Deriding things that are popular with women – from Taylor Swift to the colour pink – as “basic” is a blatant display of sexism. Of course, we women should not feel obligated to perform one dominant form of femininity, but no one should ever hold it against a woman if she does like mainstream, traditionally feminine things. Despite extensive graduate work in Women’s Studies, I had not yet rid myself of all my internalized prejudices against things that are popular with women. And really, TLC’s Say Yes to the Dress definitely rates well with a ton of women folk.

Everything changed, however, when my family and I arrived at the Kleinfeld’s. First off, Mary (the best salesperson ever) was assigned to me. She took me aside, away from my mother, my aunt and my sister, who came along as my opinionated entourage. Mary was determined to get an authentic idea of what I wanted out of my dress. She was interested in what I loved, not what my relatives loved. It was empowering to have someone ask me my vision. It felt like for a few minutes, I existed in a separate plane from all the politics and minutiae of wedding planning. As a woman, people very rarely ask you WHAT YOU WANT. Frankly, it kind of sucks that there are so few avenues for women-identified people to have that opportunity.

At first I was taken aback to be asked for my preferences. So much of my life as a woman is about trying to dress the way other people think I should. Between work dress codes and TV personalities who insist leggings aren’t pants, I’ve spent much of the last 29 years dressing the way society tells me I should. Because of this, when asked how I wanted to look for my wedding, I didn’t really have an answer prepared. Instead, I began to free-associate random words like I did that one time met with the school psychologist when I was 7. “Hmm,” I said. “I guess…whimsical? I mean, like, fancy? But not, like, in an Iggy Azalea way?” Eventually I shouted, “Season 2 Downton Abbey! Before Matthew died and the whole show went downhill, you know?” Rather than being horrified by incoherence, the unflappable Mary proceeded to act as my wedding couture spirit guide.

By the end of my three-hour appointment, I tried on eight dresses. I started with one that had such a bloody huge skirt I could have fit all five of my bridesmaids under it with me. I must admit it was a stunning cream-coloured confection, but I dismissed it immediately: “I always imagined my fiancé being able to stand beside me at our wedding,” I told Mary. “Also, we’re spending a lot on renting a chuppah, so ideally I want a dress small enough we can fit under that at the same time.” Mary just smiled. For once in my life, I didn’t feel like I was being judged as “high-maintenance” for daring to be a woman with an opinion.

After deciding against dressing as a walking meringue, I proceeded to try on a variety of other styles. Some of these gowns were rejected for being too blingy for my tastes, while one was so low-cut, it didn’t even cover my areolas. Finally, because she is a wedding dress genius, Mary picked out something from the floor I never would have considered and brought it to my dressing room. It was a gorgeous, off-the-shoulder, Ivory-coloured Vivienne Westwood that hugged my waist in the absolute perfect way. It was love at first zip!

I must say that when I first tried on my dress, I didn’t feel like a princess, or a movie star or even a bride. I felt like…me. I felt like an adult lady rocking a great gown that emphasized her curves. Like many women, I’ve often felt insecure about my body. I worry my hips are too big (even though, as a body-positive feminist, I know there’s really no such thing as “too big” or “too small”). I also frequently resent my ample boobs for how hard it is to wrangle them into a shirt with buttons; however, Mary found me a dress that showcased the very things about my body I usually try to downplay. Faced with the results of putting all my so-called trouble spots on display in Kleinfeld’s three-way, floor-length mirrors, suddenly I didn’t hate my curves anymore. I decided, then and there, to stop running from them.

Of course, I wouldn’t be a good feminist if I didn’t admit how this wonderfully body-positive experience was a privilege. My mother generously offered to pay for my dress, and I accepted. I know how lucky I am. Sure, wedding dress shopping was a materialistic experience, but it made me feel beautiful. That’s a rare feeling in a society that tells women we are never pretty enough.

When I finally told Mary I thought I’d found the dress of my dreams, she replied, “Are you saying yes?” At first, I winced. Did I really want to use that TLC lingo? Did I really want re-enact a scene from a reality show in front of my family and the pristine white walls of The Hudson Bay Company? I hesitated, still not quite over my prejudice against all things deemed “basic.” Then, I thought, to hell with it with it all. “Yes!” I declared with confidence. “I say YES to the dress!”

Yep, this girl said yes to the dress and absolutely loved it. And if you think that makes me a “basic bitch,” that’s a you problem, not a me problem.