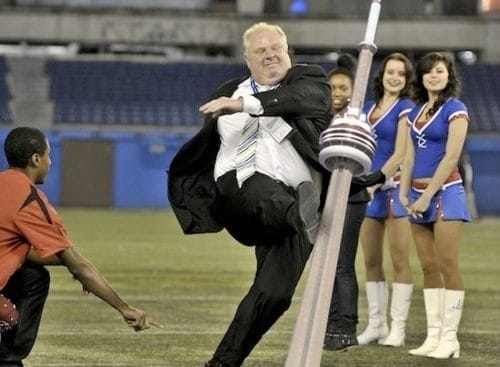 "Dude has been exhibiting behaviour that would have gotten him fired from a job at Claire's Accessories, yet he's still allowed to be the sweaty, red face of our city."
Life Stories

The Grown-Ass Woman’s Guide to: Being from Rob Ford’s Toronto

You’re a grown-ass woman, and you either grew up or live in the Greater Toronto Area. Maybe both. Maybe neither, but no one from the place you now live knows where Windsor is, so once you say “Ontario” they just sort of presume Toronto. You’re not offended, it happens, the world is large, let’s move on. Except this week, and for the past few weeks, they won’t let you move on. They have questions. They need to know.

“Did your mayor really smoke crack?” Yes. “And he is, by all accounts, very probably racist and misogynist?” Seems like it! “And he admitted to the public that he has a history of drunk driving?” Yup. “Does he, um, super love eating pussy?” I would debate the veracity of this statement in a court of law if I had to. “But he’s… still your mayor?”

Okay. Hoo boy. Yeah. He is. I mean, kind of. With Toronto currently getting more media attention than Miley Cyrus’ butt and Batkid put together, people who aren’t living daily with the exhausting, cartoonish spectacle that is the ever-evolving, never-improving Ford scandal have a lot of questions. You probably have a lot of questions too. Don’t worry, it’s going to be fine. Probably. Maybe. I hope. Here’s how to explain it to others without turning to crack from the stress.

The Bad Mayor Olympics
To get non-Torontonian friends on the same page, remind them of the worst mayor their city has ever had. [NB: to gather evidence for this segment I tried googling “bad mayor,” but all of the results were about Rob Ford.] Now, simply tell them “Our mayor is like Boris ‘dangling from a zipline’ Johnson/Gregory ‘Three DUIs’ Taylor/Frank ‘don’t worry kindly old lady I’m just bulldozing your house to build you a new one, haha just kidding for some reason’ Melton, ON CRACK. Because he smokes. crack. That metaphor is now literal for us, please take a second to acclimatize to how bad that is. Don’t worry, after a while you’ll stop feeling outraged and start feeling quietly sad.”

Apologies mean literally nothing to this man
Most of Ford’s so-called apologies have been the adult equivalent of being eight years old and telling your sister, “Oh sure, I’m sorry… sorry you’re a JERK!” Except in this case it’s “Oh sure, I’m sorry… sorry you’re demanding I, an adult man, do my SALARIED JOB!” A fun way to show someone how truly sorry you are is to follow up all apologies with threats of legal action. Litigious is the new remorseful, GET THE NET. Toronto is stuck in a cycle of slurred half-pologies with no end in sight; occasionally repentant statements have to be made to handle remarks made during repentant statements from earlier in the day. Put simply, Ford is a living, breathing encapsulation of popular Instagram hashtag #sorrynotsorry.

We can’t kick him out all the way, but I promise we are trying
With the exception of a shrinking, confusing group of supporters known as Ford Nation, many in Toronto agree, it’s insane; at this point dude has been exhibiting behaviour that would have gotten him fired from a job at Claire’s Accessories, yet he’s still allowed to be the sweaty, red face of our city. While he’s had many of his powers stripped by city council and may lose more in a motion to be voted on today, it’s technically impossible to oust him as mayor unless he misses three or more consecutive city council meetings. Ford is, naturally, pursuing legal action against the recent motions.

The Dark Side
Rob Ford is an international laughing stock. Because of this, a lot of people are getting their information about this saga via comedy programs like The Daily Show, SNL and Jimmy Kimmel Live. Because of this, they mostly know our Robbie as the guy who is bad at football, not smoking illegal drugs and walking. They do not know him as the guy whose wife has called 9-1-1 on more than one occasion during intense and possibly violent domestic disputes. Or who asked a stranger at a hockey game if he wanted his “little wife” to “go over to Iran to get raped and shot”. Or who may have paid the utility bill at the crackhouse where he did drugs and was photographed with two men, one of whom would end up murdered, the other jailed. Feel free to tell them this stuff in between ‘fat crackhead falls down’ jokes.

Toronto twitter is making it happen RN
If you don’t feel comfortable speaking on behalf of a city (especially one you are not in), direct concerned inquirers to twitter dot com, a popular social networking site that allows users from across the city (and other parts of the world, but Toronto Twitter is its own special thing) to upload short, informative… okay, joke-y joke-y oversimplify-y aside, Toronto’s media outlets are kiiiiilllin’ it on Twitter (s/o to @robyndoolittle and @katiesimpson24) and the various hashtags associated with the Ford situation, from the legit #TOpoli to the perfect #WouldBeABetterMayor are also incredible. When I’m looking for Ford updates, I start here.

There is literally no way in hell that guy eats pussy.
Period.

Try to remember that this too shall pass. He can’t be the mayor forever (yo, Scarborough, if you mess things up for us in 2014 it’s going to get very real). Don’t let people get too mean about it–it’s not like you voted for him, and if you did, I trust that you feel stupid enough already. If someone is giving you a really hard time, tell them you are going to pursue legal action. It turns out you can literally sue anyone for anything you want. (Disagree with this and I will sue you.)

"Dude has been exhibiting behaviour that would have gotten him fired from a job at Claire's Accessories, yet he's still allowed to be the sweaty, red face of our city."