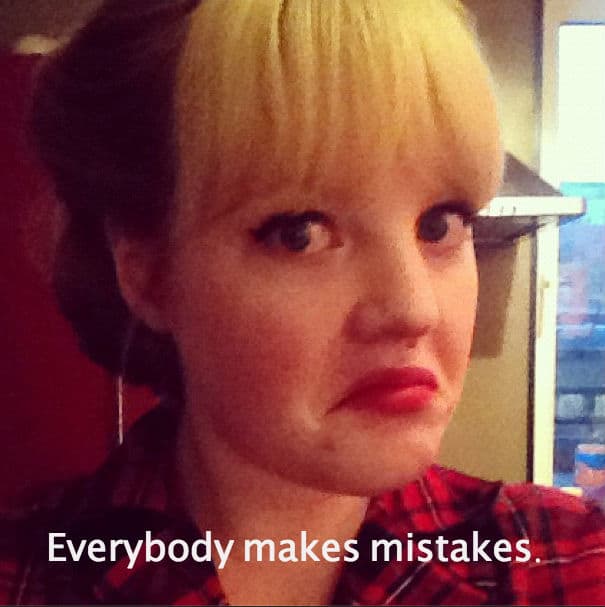 "Having a human body and brain and simply existing in the world means you're going to be embarrassed so much of the time by things you do, think, and say."

The Grown-Ass Woman’s Guide to: Mistakes

You’re a grown-ass woman. You’ve made some mistakes in your life. And that’s okay! We all have. I’ve been trying to make babybangs happen to me for YEARS. The last time I tried to do this, Diamond, my hairdresser, cocked her head to one side and said, “Can I just try something?” and then BLEACHED ONLY MY BANGS. Diamond, why. WHY, DIAMOND. I chalked it up to the kind of mistake I would later read about on a Buzzfeed list about being in your 20s and went about my life, brushing that mistake right off my shoulders. And eventually getting a different hairdresser (sorry, Diamond) to dye my bangs back to the colour of the rest of my hair. We all make mistakes.

And yet. And YET. I have big problems with this Mistake Culture we are living in. Every damn day there’s another thinkpiece or listicle or episode of television about young adults making terrible life choices, the overall message of which is: “You’re a mess, and that’s okay! Make the worst choices possible, because YOUTH!” To wit:

“The way I look at it, you are never going to be younger than you are at this very second in time, so why not take these years for what their worth? Drink too much, even if you have to go to work at 8 a.m. the next morning, a few cups of coffee and an adderall can cure the worst of hang overs. Spend money you don’t have, wake up in the morning to check your bank account and see you actually did spend $100.00 at the bar last night. Date the wrong guy, or maybe two or three of the wrong guys, so when the right one comes along, you know it. HOOK UP WITH THAT SEXY GUY THAT’S HITTING ON YOU!!! Even if he is a stranger and you don’t remember his name the next morning.”

This attitude is my nightmare, and not just because I can picture the tone and stance of a person screaming HOOK UP WITH THAT SEXY GUY THAT’S HITTING ON YOU!!! in your face with three exclamation marks. Her name is Tamara, she’s into nail art, and she needs to chill out. Here are some other problems with attitudes like the fictional Tamara’s:

I get it, being a human is embarrassing.
Like, very embarrassing. Having a human body and brain and simply existing in the world means you’re going to be embarrassed so much of the time by things you do, think, and say. That fact is, I think, the root of this whole “LUV UR MISTAKES” craze sweeping the world at the mo. In that light, it’s kind of nice! Believe in yourself! Understand that things will go poorly! Fine! Yes! We’re all looking all the time for ways to understand how messy and weird and stupid life can be, so I get why you came up with this, whoever did this (Thought Catalog?), HOWEVER…

This is not a Get Out Of Jail Free card to be a tacky asshole who doesn’t care about anything.
Your twenties are not Juvie. They don’t wipe your “being a good person” record clean when you hit your 30th birthday, unleashing you on the Real World with a pat on the back and a knowing smile, absolutely willing to overlook that time you ruined that girl’s birthday party because you thought she was talking shit about you on the Internet. If you are an awful disaster in your twenties, the memories of that will follow you into your thirties. You’ll be lucky if it’s only memories—awful attracts awful, and if you’re like Ms. Adderall Hangover 2014 from the above example, what kind of crud-pile friends are you going to be surrounding yourself with? What job opportunities? What life experiences?

If TV jumped off a bridge would you do it too
Oh my god, TV right now. Lots of shows (GIRLS) are about making mistakes (GIRLS) all over the place and just not apologizing for it (GIRLS!) because it’s a Wednesday night baby, and you’re alive. It’s like everywhere you look the characters of film and television are living, loving, and learning from their mistakes, but just making those same mistakes over and over even after they know better. First of all, it’s Live, LAUGH, Love, read a pillow, and second of all, learning from your mistakes is important, but so is just straight up learning. Fucking up really badly is one way to get life lessons in there, sure, but it is not an essential precursor to the acquisition of knowledge or experience. You can learn just as much about yourself from challenging yourself to be better than from accepting your worst behaviour as “who you are.”

There are good mistakes and bad mistakes. I know you know the difference.
Good mistakes are: putting yourself out there even though it turned out very embarrassing, trying a new food only to discover you are not really ready for the vegan lifestyle, basically anything you chose to wear in the early 2000s, and persevering with your dream of having tiny, Bettie Page-style babybangs in the face of longstanding and increasingly intense protest from your friends and loved ones.

Bad mistakes are: drunk, unprotected sex, flirting with friends’ boyfriends, any food ordered past 2am, staying in a relationship with a Known Asshole because you don’t know how to leave and/or feel like it’s just nice to have a boyfriend at all, renting an apartment without seeing it in person first, and basically anything that makes you feel yucky in your gut or heart. You know what that feels like. Don’t do that!

The important lesson at the root of this madness:
Don’t be too hard on yourself. Nothing is as big a deal as you think it is, promise. In fact, the whole “love yourself, love your mistakes” ethos is not an entire waste of time. It can, I think, be productively adapted, understood instead as “If you try something that seems worthwhile and it ends up being a total disaster, that’s okay. It’s wonderful that you tried.” Which, of course! You don’t need your mom to tell you that, although like, that’s exactly what she would say, right? (Mom-ica, at your service.) Your younger years are the time to take bigger risks because you have less to lose. It doesn’t mean you have NOTHING to lose or that you should be taking stupid risks all over the place because it’ll make for a funny story in a year, but there is certainly room for experimentation and trying new things just to see how they go. If you’re doing something so you can write a thinkpiece about it for $20 the week after, you’re doing it completely wrong. Now zip up your jacket. It’s cold outside, and Mom-ica worries.