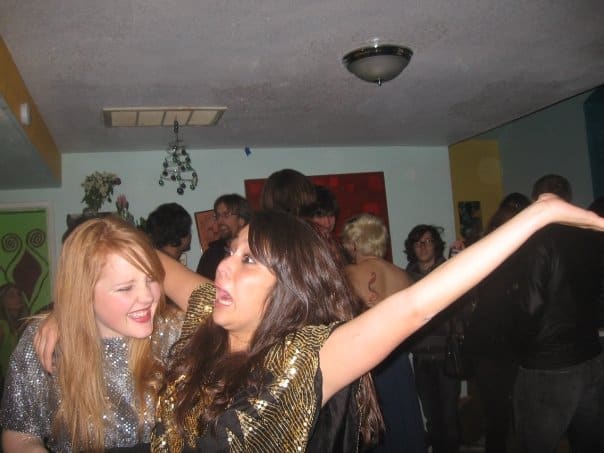 "The goal here is to hear the New Year's countdown over a grainy radio in the back of a cab filled with more humans than the legal amount..."

The Grown-Ass Woman’s Guide to: The Biggest Night of Your Entire Goddamn Life

Bitches, it’s New Year’s Eve. That means in a few short days, stinky old 2012 is dead. The Mayans were wrong and so was your ex-boyfriend Steve, who will probably never find a girl as wonderful as you again, and Larissa bought us all matching tiny bottles of champagne we can put fucking STRAWS in. Tiny champagne straws! Let’s do this.

Sparkles
Do you own anything with sparkles? Get some shit with sparkles on it!You cannot NOT glitter your way into the dawn of another trip round the sun. In fact, scratch that. You’re not taking a trip round the sun this year. No. This year, you ARE the sun. Let everyone know it by slipping your glitter pedi into your glittah heels and glistening around the room in your full-sparkles dress. Blind your fellow revelers with the hope and promise of 2013 and with your disco ball-inspired spangly fascinator. Twinkle the night away! Glitter like the New Year’s princess that you are! That ball in Times Square got nothin’ on you! Baby you’re a firework! Etc!

partypartyparty
It’s important to hit up as many parties as humanly possible. In fact, you should probably be aiming to attend more parties than humanly possible. This is the biggest and best night of your entire life, remember. There will never be another night like this. Say “yes” to every invite you receive and then check facebook for a few others to click ‘attending’ on. The goal here is to hear the New Year’s countdown over a grainy radio in the back of a cab filled with more humans than the legal amount while in transit from one very lame party to the next one which will, obviously, be 4,000,000 times better (Steve is going). Better yet, see if you can miss the countdown altogether. A fun way to do this is to wear shoes out that you cannot physically walk in. Make sure to tell your friends how much your feet hurt while you slow them to a hobble! They’ll love watching people in warm bars and houses clink glasses at midnight while you guys wait for the streetcar. Don’t even THINK about going the mature route and having a nice dinner party for your closest friends, because holy god, what the hell are you even going to Instagram from that. Do you want your party pics to be used free of charge as the basis for a new vodka campaign or not??

Sham-pagne
DO YOU SEE WHAT I DID THERE. Champagne is a crock. Do not be held captive by the French tyrant. Too long has the Champagne region held a despotic grip on your hard-earned drinkies. Well screw it. As discussed, this is your night. You secretly got your makeup done for this, you deserve to party how you want. “What, that’s just how my face looks! I watched a really good youtube tutorial. Pass me my jack and coke please.” – You, killing it. JK JK JOKE ALERT do not fuck this up for all of us, put the imitation Cliquot in your pie-hole and shut up. Your hangover tomorrow will leave your mouth tasting like expensive pee and your head feeling like someone drove a spike heel into the middle of your brain but rules is rules. Cheers!

PICS OR IT DIDN’T HAPPEN
Don’t make that girl you met at that guy’s party that time wake up to a cold, grey 2013 without any pictures of what you were up to last night. She is just sitting at home dying to know, refreshing facebook every five seconds, scouring your old twitpics for some tiny glimpse of the Lohan-level hi-jinx you got up to. Give the people what they want by taking between 7 and 500 pictures of you and your friends at different stages in the night. For a fun compare and contrast, line all your friends up in a sexy ladies line and cheers your drinks together while keeping one hand super-glued to your hip. Try to take the same pic later in the night! PRO TIP: to show everyone you are having a good time, consider throwing your hands in the air like you just don’t care. Instead of “cheese,” shout, “I loooove you guyyyyyys!!!”

Kiss someone at midnight you dumb loser
Kiss someone or throw yourself off a balcony; these are the only options for midnight. Sparkle your cleavage towards any stranger in a suit and do not ask if they are straight or taken or elderly or your dad just smooch them like your life depends on it, or the 400 times you watched When Harry Met Sally back-to-back will have all been for nothing.

You say you want a resolution?
With resolutions as with party appearances, more is more. Remember, this is THE year. It’s all happening. Think about everything you’ve ever wanted to do and then multiply it by four. It’s 2013, you have to think big! Imagine the biggest statement you could make and then add “this year I will…” in front of it. I, for example, will spend this year losing 300 pounds, putting me at -160, almost 280 pounds less than my original goal, simply by believing in myself and cutting out both solid and liquid food. I will also climb the corporate ladder while getting in touch with my body via daily yoga, pilates, and massages, learning about my family’s heritage, mastering Mandarin, Arabic and Esperanto, building schoolhouses in Africa and giving myself permission to dream.

Grown-Ass Woman’s note: this week’s guide is obviously for jokesies. But New Year’s Eve kind of sucks, right? (Right.) Here’s the crazy secret though: it doesn’t have to! Just forget what all the booze ads and club promoters and episodes of Gossip Girl have to say about it and do exactly what you want, whether that’s a quiet night on the couch with your fam, a crazy bender at one of those multistory nightmare clubs, or hosting an intimate pagan ceremony/orgy in your sex dungeon. Or ignore it completely, eat some dinner and fall asleep. It’ll still be 2013 tomorrow. Happy New Year everyone!