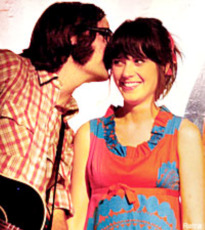 The Most Adorable Thing Ever Happens in The Pacific Northwest

Ben Gibbard Locks It Down

To a collective pop-culture tune of maudlin strings, acoustic guitars, and celestial synthesizers, Ben Gibbard (of Death Cab for Cutie and Postal Service) and Zooey Deschanel (of She & Him, (500) Days of Summer, and the fantasies of every single one of your skinny-jeans-wearing guy friends) got married outside Seattle this weekend.

Things like this make me pretty sure that everything in the world is as it should be.

For most of us, this means the end of countless Almost Famous/Give Up inspired high school fantasies, (and also that art and emotions might just be the same thing-huh.) The pair, who have been dating since 2008, are like the Kurt and Courtney of their generation-where plaid is replaced with knitting and heroin is replaced by getting stoned, talking about feelings, and cooking each other breakfast. So put on some vinyl records, and curl up with a cup of fair-trade coffee to read Chuck Klosterman aloud in your living room in honour of the cutest god damn nuptials in the history of indie rock and roll.

The Jewelry Line Celebs are Swooning for: Why We Want to Throw Our Very Own Lia Sophia Event

Zooey Deschanel launches Hello Giggles, an as-yet-sparse entertainment site we bet will be as cute as she is