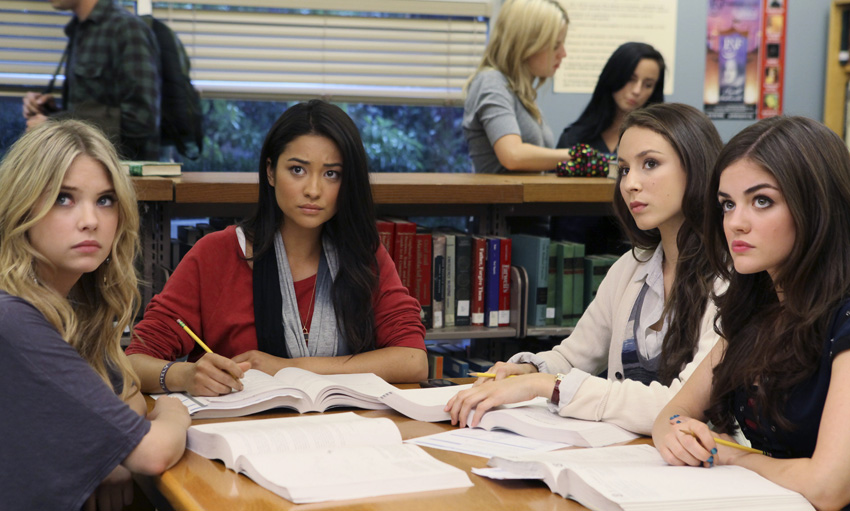 Have you watched this yet? It’s basically Desperate Housewives for preteens but with the chronic texting of Gossip Girl and the deranged violence of 1980’s slumber party hit Heathers.

Unlike MuchMusic’s other uber successful tween show, Degrassi: The Next Generation, Pretty Little Liars doesn’t exactly uphold the same moral standards. In fact, MuchMusic’s blog tells fans, “Learn how you can be pretty and evil at the same time (like there’s any other way!)” Healthy stuff!

Here’s the gist of it: four smokin’ hot rich girls get wasted, pass out, black out and upon waking up realize that their best friend, Alison, is missing. No biggie.

Fast forward a year and the girls, who have all gone their separate ways, return to school after a summer of sin and scandal. Just a few weeks into the school year and their dear ol’ friend, Alison, is found under layers of mud beneath a gazebo in a classmates’ yard.

After burying their bestie, they start receiving mysterious texts from someone named “A”. (Enter the secret ingredient that made Gossip Girl what it is, plus one of the main characters is named Mona Vanderwaal. C’mon!)

Is “A” their dead friend? Wait, did she even die? Are the spooky notes from the really sexy blind chick that appeared out of nowhere at the funeral? No one is to be trusted, everybody lies and in between getting freaky texts in the middle of the night, the girls do what teenage girls do – shoplift, smoke drugs, become lesbians, make-out with their teachers and bomb SAT’s. Well, the hot ones on TV that is.

Just like every good teen soap opera (Bev Hills, The OC, etc.) the parents have to be troubled too, so expect compromising BJ’s with cops, etc.

In some scenes the foursome are physically covered in dirt looking for clues, and in others they are posing for a prom queen photo. If this sounds like your jam – tune in tonight for the season finale and then kill half a day watching back-to-back episodes on Much to understand what the hell is going on.

If Bachelor Pad and Jersey Shore aren’t enough to feed your hunger for guilty pleasure, then here’s another addiction you can test out.

The season finale of Pretty Little Liars airs tonight at 8PM on Much.