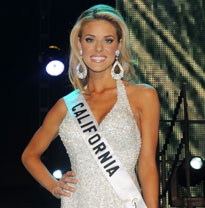 The Princess and the Plea

Once upon a time (last month, actually) in a far away land (an evil village called Las Vegas, where shame was born), a superficially beautiful girl named Carrie squatted in a cheap hotel room. Beneath her bleached blonde locks and overwhelming veneers, Carrie was just a sorority-girl-slash-Target-model from a small evangelical town who wanted to become a princess, of sorts: She wanted to become Miss USA.

Carrie was a good little girl (5”11 with monster rocks, but you know what I mean) and skipped gleefully through the competition, never straying from the path. But when it was the beauty queen’s turn to demonstrate her capacity to form sentences, an ogre emerged from the blogging shadows. The self-proclaimed Queen of Media grumbled: Should princes always marry princesses, or could they marry princes too?

Though Carrie thinks it’s great that everyone in the whole land can choose, really they can’t choose and that makes Carrie happy inside. No offense to the princes who aren’t interested in missionary intercourse for reproductive purposes with her, but she was raised by traditional queens and that’s the way God said it should be before he planted dinosaur bones to test us.

Everyone at the ball booed little Carrie, or maybe they cheered, depending on the magical magic of television. The ogre, stewing in his newest makeover, stormed back to his cave, stomping his boots and re-booting. Into his enchanted webcam he uttered a wicked spell: Little Carrie Christian bitch, into your modeling—a glitch!, May your career be brief and gray, press as bad as I be gay!

Poor Little Christian Carrie. She lost the crown to Miss North Carolina (who?), a lookalike clone whose answer was just right. Rumours circulated that the beauty had rammed the beastly Michael Phelps. Then emerged a pic of an even littler Carrie in just her baby bloomers, and another with her ‘tween baby-feeders showing (though in her defense, it was windy and she didn’t know what a camera was). Needless to say, the monster rocks were revealed as presents from her fairy godmother: the Miss California organizers themselves.

But when just when life felt like a single set of footprints, Little Carrie found herself at the foot of the King of Media, begging for her title slash dignity: Pity me, oh lord, my trump! It’s just my teeny tiny rump. As a Christian, for my sins I will pay, but as a model, I’m Miss USA! [Smiles for camera]. Carrie gave the lamp a little pre-marital rub and was granted three wishes: one to keep her title, another for the sanctity of opposite marriage, and another to be forgiven when she poses in Playboy within the year.

1984 Is Returning to Theatres on April 4th