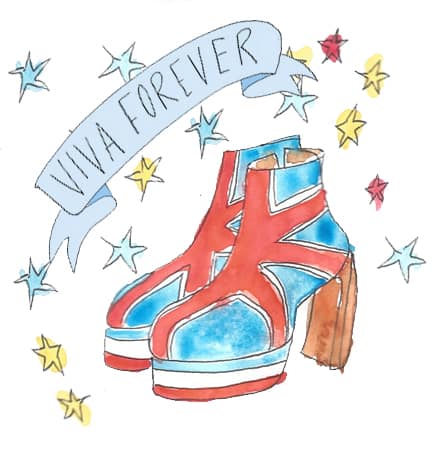 Every week, Today in Nostalgia looks at the trends we once clung to, defended, and were ultimately betrayed by. Memberships to the Beanie Babies Official Club accepted; BYO Pogs. Let’s do this.

Describe, please: The year was 1997, and for a full year we’d been slamming our bodies down (and winding them all around) to our hearts’ delight. So by the time the Spice Girls’ sophomore album came out in November, we were ready for something new. But I don’t think any of us were prepared for just how much new was in store for us, and I mean very literally, in store: between the release of Spiceworld in 1997 and the movie, Spice World, in January 1998, the Spice Girls became more than a musical group—they became a religion. We worshipped at their alt via stickers, postcards, scrapbooks, pencils, bags, and posters. We consumed chocolate bars, lollipops, gum, and candy like communion. We sang hymns like “Too Much” and “Who Do You Think You Are?” We paid homage to their beings through dolls. We drank Pepsi, begrudgingly, because “Move Over” played during its commercial. And I bought a VHS of their concert in Istanbul, thinking it was the movie. 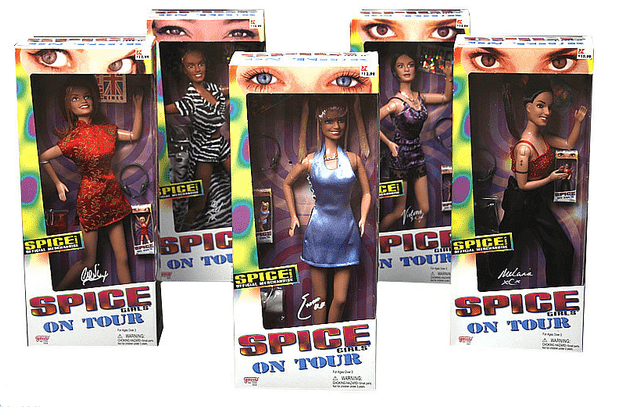 Why they were cool: Because the Spice Girls were everything you wanted to be when you grew up. They were independent, they were well-dressed, they could sing, they could dance, they were unique, they were famous, they branded “Girl Power,” and Spice World is arguably one of the greatest films of the 20th century.

But why was their merchandise cool? Oh, because it made us feel closer to the Spice Girls since we could be surrounded by them.

I knew I wasn’t a Spice Girl (despite my deep-seeded belief I looked exactly like Baby) (I did not), but buying everything they were associated with made me feel like I was in on it; like I was maybe one of the fans in the movie who gets tossed off the boat and into the Thames. (Because at least they got to see the inside of the bus.) Not only was I using their merch to pledge allegiance to the best musical act in history, I could include them in my Barbie plots, and then flip through my Spice Girls scrapbook like the devoted fan I was. I may have been a 12-year-old girl in Cambridge, Ontario, but I—unlike everybody else but my fellow Spice Girls fans—actually got what they were about. So much so that I collected their chocolate bar wrappers and taped them to their very own special page like eating that much chocolate should be applauded. (It should be. I’m still proud.)

Yes, compared to everybody else, I—nay, WE—were responsible for the Spice Girls’ success, and if they were around forever, the world would have only us tiny tweens to thank.

Odds of a comeback: Viva (comeback) forever. It’s been 15 years since Geri Halliwell left the Fab Five (let’s talk about the sick day I begged my Mom for so I could stay home and properly mourn), so wounds have healed, reunion tours have been executed, and Olympic performances have ensued, thank GOODNESS. Meaning: we have all been validated in our merchandise-buying and zig-a-zig-ah-ing, and we would all do it again. (Only bigger and better because now we have jobs.)

I mean, is it “cool” to have a Spice Girls scrapbook in 2014? No, but that’s because it never was. The Spice Girls weren’t about being cool, they were about being yourself. None of those women conformed to what was “in” at the time, and because of that, we were inspired to embrace our own identities (or at least ones that fell in line with Baby’s, Sporty’s, Scary’s, Ginger’s, and Posh’s), and then to look at Spice Girls paraphernalia as proof that it’s possible to “make it” by being yourself. Yet another comeback from the Spice Girls would merely prove two things we already know: 1) if you wanna be my lover, you GOTTA get with my friends, and 2) everything we thought we knew at age 12 was exactly correct, duh no duh.