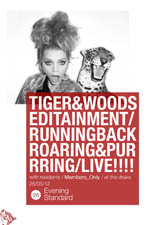 6 pm In-Store Screening & After Party @ Lomography Gallery Store, 536 Queen St. W. Lomography brings the Cannes glamour to Toronto! Featuring a special screening of a Lomokino movie made by the Palme d’Or owner Apichatpong Weerasethakul! They’ll also be celebrating the LomoKinoMUBIEdition, a collaboration between Lomography and MUBI. The camera features a playful design with MUBI’s trademark logo and award-winning independent movie director Apichatpong Weerasethakul’s signature. The special package also includes a LomoKinoScope loaded with a 35mm film roll of a scene from Weerasethakul’s own LomoKino movie and a free 1 month subscription to MUBI.

6:30 pm FUNdraiser for We Care With Underwear @ Toronto Women’s Bookstore, 73 Harbord St. Evening will include a silent auction of wearable underwear art, music, an underwear comedy performance, and wine and cheese. All donations over $50 will receive a tax receipt. Guests are asked to bring new underwear for women in crisis in Haiti, Zimbabwe, and Toronto.

7 pm “Preconscious” Opening Reception @ #Hashtag Gallery, 801 Dundas St. W. Opening reception of Laura Thipphawong’s 4th solo show, “a vivid series of dreamlike oil paintings depicting scenes somewhere between the conscious and subconscious of our minds. This series explores the personal clues derived from the preconscious, the gate between what is repressed and what is clear. Through exploration of symbols, archetypes, and dreams, we can decipher our own duality and eventually accept what haunts us most.” Exhibition runs until June 9th.

10 pm No Face No Problem @ 1602, 1602 Dundas St. W. DJs Pizza Golkerson and Gossip Merle present an ode to female MCs (and probably some other stuff too).

11 pm Galapagos Presents: Ben UFO @ The Drake Underground, 1150 Queen St. W. DJ Ben UFO is one of those rare breed of young DJs to make their name exclusively off DJing. You won’t find a production anywhere to his name, yet Ben Thomson is at least as renowned as his producer counterparts in the Hessle Audio triumvirate, Pangaea and Pearson Sound. He’s a DJ who can play sets composed entirely of classic house, vintage garage, OG dubstep, or dubplate-heavy. Local DJs My Favorite Robot and VLSONN support. $10.

10 pm Shindig! Presents: Mop Top Jukebox @ The Piston, 937 Bloor St. W. A special tribute to the sounds of the 1960s British Invasion, Mod and their American R&B influences! Expect to hear: The Beatles vs. Chuck Berry, The Rolling Stones vs. Muddy Waters, The Animals vs. The Isley Brothers, The Who vs. James Brown & The Famous Flames, Spencer Davis vs. Otis Rush, The Troggs vs. Rufus Thomas, Dusty Springfield vs. Etta James, and much much more. With resident 7″ 45 rpm vinyl selectors General Eclectic, Double K, and Splattermonkey. $5.

10 pm Jamz! @ Clinton’s, 693 Bloor St. W. An anything goes, no bullshit, non-genre, dance ’til you drop, all your friends in one room, party hard, make the floor wet with sweat, shit show!

9 am Barns Art Market @ Artscape Wychwood Barn, 601 Christie St. Some of Toronto’s finest artists, craftspeople, designers and makers come together every month at the Artscape Wychwood Barns to exhibit and sell their work. Handcrafted and unique jewellery, ceramics, clothing, paintings, and more! Until 3 pm.

11 am Distillery Art Market @ Distillery District, 55 Mill St. A weekend outdoor market of artists, craftspeople, and food artisans in the historic Distillery District. It’s also a great opportunity to visit the many vibrant artist studios located in the Case Goods Warehouse. Until 6 pm.

1 pm Shameless Clothing Swap @ Toronto Free Gallery, 1277 Bloor St. W. Bring a bag of clothes, take a bag of clothes (BYO tote bag). Clothing should be clean and in fair condition – all sizes and styles welcomed. Private changing areas will be limited so it’s suggested that you dress in layers. Until 4 pm. $5 or $10 with a copy of the new issue of Shameless magazine.

2 pm “Constructions of Femininity” Opening Reception @ Loop Gallery, 1372 Dundas St. W. “An exploration of the artifice of feminine dress and identity. This work juxtaposes the extreme silhouettes of 18th century dress with the armour of the modern day hockey warrior and was inspired by young women hockey players who have redefined femininity to include feats of courage, strength, and power. Hockey equipment has been transformed with feminine signifiers of ribbon, sequins and beading paired with silhouettes such as a romantic tutu or panier made out of armour-like mesh. This work is intended to be a whimsical celebration of the power of sport to redefine femininity.” Until 5 pm. Exhibition runs until June 17th.

4 pm Doing The Same @ The Red Light, 1185 Dundas St. W. The 2012 launch of this weekly BBQ jam! Smooth West Coast sounds by DJ Ghetto Gold Matt and guests, cheap beers, and a BBQ on the patio.

7 pm We’ve Got A Crush On You @ The Central, 603 Markham St. A mixer for people who want to make sex-positive like-minded friends. An invitation for any and all: hetero, homo, queer, trans, kinky, lesbian, gay, vanilla, bi, flexible, poly, and open-minded young people (or young at heart). Come make new friends and find yourself a summer crush!