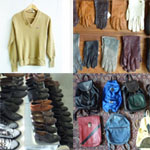 I’ve reached a point where I’ve outgrown oatmeal Thinsulate two-in-one glove mittens, but am not yet ready to drop 100 bucks on fine Italian leather gloves from Oglivy’s. Although I’ve somehow acquired four pairs of Olympic mittens,* the giant red woollies are a tad clumsy when I’m trying to finesse my bicycle between two taxis.  Because I heroically/stubbornly insist on riding my bike until there’s snow on the ground, I’m gonna need some gloves.

Luckily, Vintage Mart is having their first sale in their new studio space. There will be tons of vintage clothing and accessories spanning from the 60s to the 90s, including shoes, boots and fall and winter wear.
Some of the goodies include a plethora of 90s canvas backpacks, awesome sweaters, and yes, lady-like gloves galore. And in case you need reminding, Christmas is a mere 7 weeks away, so you also can get a head start on your gift shopping and holiday party outfit planning.

The sale will be hosted at 5445 De Gaspe (suite 600), where the Vintage Mart gang spend their days sewing, designing, mending and organizing vintage. Sarah (Cheap Opulance) and Emily (Caesar Pony) sell vintage full time from the studio, while Yana (Supayana) and Angie (Norwegian Wood) are working on their own clothing lines.

The sale kicks off on Friday November 4th from 5pm-9pm. Opening night drinks will be served.
The sale continues on Saturday November 5th, from noon to 6pm.
Cash only.
@ 5445 de Gaspe, suite 600

*Apparently, someone put the word out that I love those mitts, as I seem to get several pairs with each cold weather holiday. Maybe it’s just a go-to gift for Canadians girls with cold hands. In any case, the Canadian Olympic Committee is reviving the red mitten campaign for the London 2012 Summer Olympics, so you can get your very own if you don’t have them already, and I can get a few more pairs!