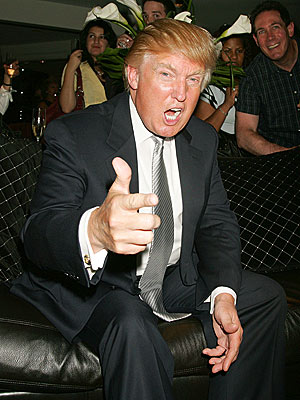 We come face-to-face (well, voice-to-voice) with the hardest-working combover in the industry: Donald Trump

That was my Tuesday morning! I was in bed! Let me explain.

The other day, we at She Does the City were sent an invitation to participate in a conference call with ‘The Donald’ and whichever two celebrities ended up fired from last week’s THREE HOUR LONG episode of The Celebrity Apprentice. The minor problem that none of us watch The Celebrity Apprentice, or have any idea what is happening on it, was eclipsed by a weird need I never knew I had to be able to tell people “SORRY, busy this week. I have a casual conference call with THE DONALD on Tuesday. No time to talk. Bluetooth. Clear my schedch.Thanks.”

I was expecting Donald Trump to be more or less insane. And he was. There was a lot of talking about how the show was “obviously” riveting to viewers, and how incredibly successful the franchise had clearly been, and how the celebrities on it were incredible, etc.etc.etc. But all the hair and the lip pursing and the uncalled-for threats to campaign for the presidency aside, Trump is very clearly a savvy businessman-with-a-plan. Also, Dee Snider of Twisted Sister and Debbie Gibson of… this were there, having just been fired in the aforementioned THREE HOUR LONG recent episode.

So, the other journalists were all really hardcore. They knew their shit. They had hung out for an episode of reality TV that was as long as the film Titanic. They asked very specific questions about the intricacies of the relationships between Lisa Lampanelli and one of the Real Housewives of somewhere. The first question went as follows: “My … question is for Dee, and that’s—I mean you obviously weren’t on the team to see what happened really with Arsenio [Hall], with Aubrey [O’Day]during this past episode, but you spent a lot of time with them, and you were in the Board Room, so what was your take on what was going on over there between those two?” Celeb Apprentz fans among us (anyone? Bueller?) will know what this is about, but I still don’t and do not care to. However, I had to talk to Don, and talk to him I did. Dee and Debbie really jumped on my question, but all three said a variation on the same thing, which was this:

Monica: Hi hello [ed. note: double greeting = very professional.] On both the regular Apprentice and the Celebrity Apprentice episodes that I’ve seen, there’s a lot of fighting to the point where people are screaming at each other in the Board Room and getting kind of personal. I was wondering if that’s something you think would be appropriate in an actual board room?

Donald Trump: Sometimes good television isn’t necessarily what, you know… these are not necessarily the people that you’d hire.

At least he’s honest. Dee Snider told me that Donald would occasionally tell the men’s team that they were being boring because they got along so well and made decisions as a group. It seemed a bit like the celebrities, because of their experience in performance and television (many of the current celebrity apprentices have been on reality TV before, and some are “celebrities” exclusively because of it) had more of an understanding of the falsity of what they were engaged in than the average newbie to reality shows. Remember the Jersey Shore cast before they became all self-aware and started pastiching themselves? #neverforget. We’ve now entered a phase in TV where the ‘reality’ part is not essential, nor does it even need to be pretended at. When Miss Universe talks shit on the other women on her ‘team’ in the ‘board room’ after a ‘business challenge’, we know none of those things are done with anything in mind other than ‘good television’. We can talk about the definition of ‘good’ another time.

In conclusion, I am rooting for Clay Aiken, because of his fun and professional comments about Aubrey O’Day’s Mom’s “chotch” and how I used to have a misguided crush on him when he was on American Idol. That’s just how business works, I don’t make the rules.

You can watch the boardroom antics unfold on Global, Saturdays at 8pm ET/PT