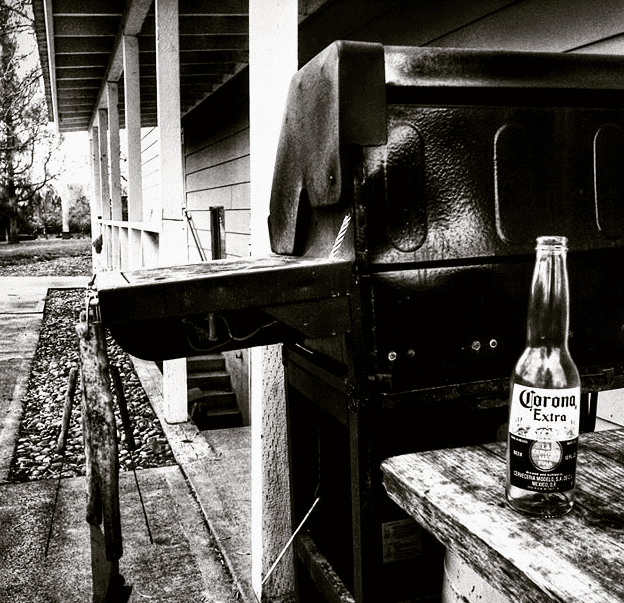 It was October 2014. The guy I was dating at the time had fulfilled my dreams of visiting a pumpkin patch that day and together, we’d popped some hot apple cider and picked out some pumps to carve.

It was unexpectedly freezing, so we zoomed home and picked up Pho and came home to my cozy apartment. We ate dinner in bed and kept each other warm. We laughed a lot.

We bundled up and ventured onto my back patio where we started to carve. We put his iPhone in a bowl and turned on Father John Misty. We drank beer and talked about our hopes and dreams and what frustrated us the most. We ordered pizza and ate that in between carving sessions.

For many nights after that when I got home I would look out into my back patio and feel a little pain in my heart. I missed that night and I think a part of me knew as soon as he had left the next morning that he wasn’t coming back.

I don’t know how or why, but deep down I knew. And because I knew this, I never picked up the single beer bottle that was left behind on my patio from that night. It was my way of holding on to that day and that moment without feeling overwhelmingly pathetic.

It is now summer 2015, and the beer bottle is still here. I’m looking at it right now. And every time I notice it, it makes me think of that night. But it doesn’t make me sad. We’ve long since moved on and dated other people and drunkenly texted each other with zero feelings involved. I’ve read a shit ton of books since then that made me cry much harder than our breakup ever did. I’ve loved people and life insanely hard since him, and I knew within days of his leaving that we were never meant to be.

This beer bottle doesn’t make me sad, but I still can’t bring myself to throw it out.

I think that night – and this sounds like an insanely depressing statement – was one of the last times I felt like I was the most important thing to someone.

This year has been one in which I’ve often felt second best. That guy dated me to get to her or told me he wanted to focus on work and instead started sleeping with someone new. In a variety of situations – some romantic, some not – I’ve often felt like I came out second. It’s a feeling I’ve felt before but never in quite so many instances back to back.

And it’s taken me a long time to reach this point of recognizing that in none of these circumstances was I coming out behind. I was, in fact, quite ahead – so far ahead that I wasn’t even involved in the situation anymore. Him dumping me was never my loss and didn’t make her any better than me; it simply propelled me even further ahead to live and learn from the next wonderful thing in my life. In none of the circumstances was life telling me I wasn’t good enough; I think instead, life was telling me I was too good, so it kept letting me free.

Be it boys or friends or work or that stranger who yelled at me for accidently cutting him off on the sidewalk, there have been moments when all these things have really hurt. But maybe they were never hurting me as a defeat; maybe instead they were hurting so I could move the fuck on and realize that I would always come out on top.

I still have this beer bottle in my back yard. I can’t bring myself to throw it away; but now it’s for a very different reason.