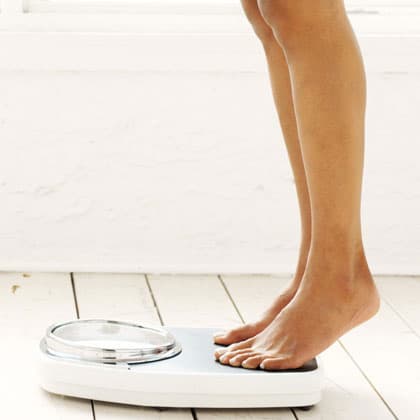 Why I Threw Away My Scale

I threw out my scale last week. I’ve had it in my bathroom since I was a kid. I don’t really know why. It was one of those things that everyone had in their bathroom in the 80s, like Jacuzzi tubs and tiny heart-shaped hand soaps.

I decided to throw the damn thing out because, you might say, it was weighing me down. One day, as I was probably peeing, I looked at it and saw what it represented to me over the years – despair, depression, elation – and then I immediately hated it. So I promptly put it out with the trash, and I’ve never felt better about my relationship with my body and all of our past and present poundage.

I was 14 when I started giving a shit about how much I weighed. This is the age in which my hips spread and my years of eating McDonald’s caught up to my thighs. Stretch marks appeared around what was now my dimpled bottom, and cellulite quickly became the bane of my existence. Unsurprisingly, this was also the year I became obsessed with weighing myself on my bathroom scale.

At the time, my friends were all Twiggy-like with those annoyingly lucky eat-whatever-they-want metabolisms. Their stick legs and tiny tushes were hugely irritating/harmful to my self-esteem. I wanted desperately to look like them and all of the “heroin chic” models and actresses that graced my favourite entertainment magazines. When a friend of mine remarked that I was “curvy,” I nearly had a heart attack.

So I worked out. A lot. I took kickboxing classes and ran on my mom’s treadmill religiously after school. I didn’t like to discuss my workout schedule with my friends because I was embarrassed. Teens didn’t really exercise in the 90s unless they were jocks. My body made me feel “less than” and unattractive. I was ashamed that I had to work at my body. I couldn’t see the positives of my strong thighs or bodacious behind (God, how I would have looooved to have Beyoncé around in my day) – I only saw that my thighs stuck out from my Le Château dress while dresses always hung nice and neatly straight on my friends.

Throughout my high school years I’d weigh myself almost daily. At one point in grade 10, when my weight was at its heaviest, my mom told me, “Muscle weighs more than fat.” I immediately stopped my daily runs and weight lifting. I didn’t care whether what my mom said was true or not – the scale’s opinion of myself mattered more.

Almost a decade later, I weighed 115 lbs. This was the lowest my 5’8” frame has ever weighed. Of course it was also the weight in which most women told me, “You look great!” while men said I looked “too skinny.” Ironically, I wasn’t trying to lose weight at this time in my life. I was 25 years old and occasionally employed, surviving on adrenaline and whatever was on sale at the grocery store (mostly carrot sticks and cereal). Admittedly, I did like how my hipbones jutted out from my body and how I could basically count every single one of my ribs. For the first time, I could easily wear a size 2 and, so, for the first time I felt good about my body. It was an extremely fucked up mentality, but nothing else in my life was going according to plan. I felt shitty about everything – my career, my finances, my love life – except whenever I’d step onto the scale. Then suddenly all of my missing self-confidence would come flooding back to me.

Today, at 32, I don’t know how much I weigh, nor do I care. Even before I made the decision to trash my scale, I hadn’t weighed myself in a very long time. It was an occasional thing I did whenever my jeans felt too tight after coming back from vacation or when I got over a bad bout of stomach flu. I would step on the scale out mostly because it was just a bad habit.

A couple of months ago, I was standing on the damn thing and watching that pesky red line creeping up close to a number that instantly made me feel horrible about myself. I had to ask, “Why am I doing this?” I finally realized that I deserved more than standing on a dirty scale and having its numbers determine my happiness.

Because the thing is, I am happy. And thankfully I know now that I don’t need a scale to measure the success of who I am.