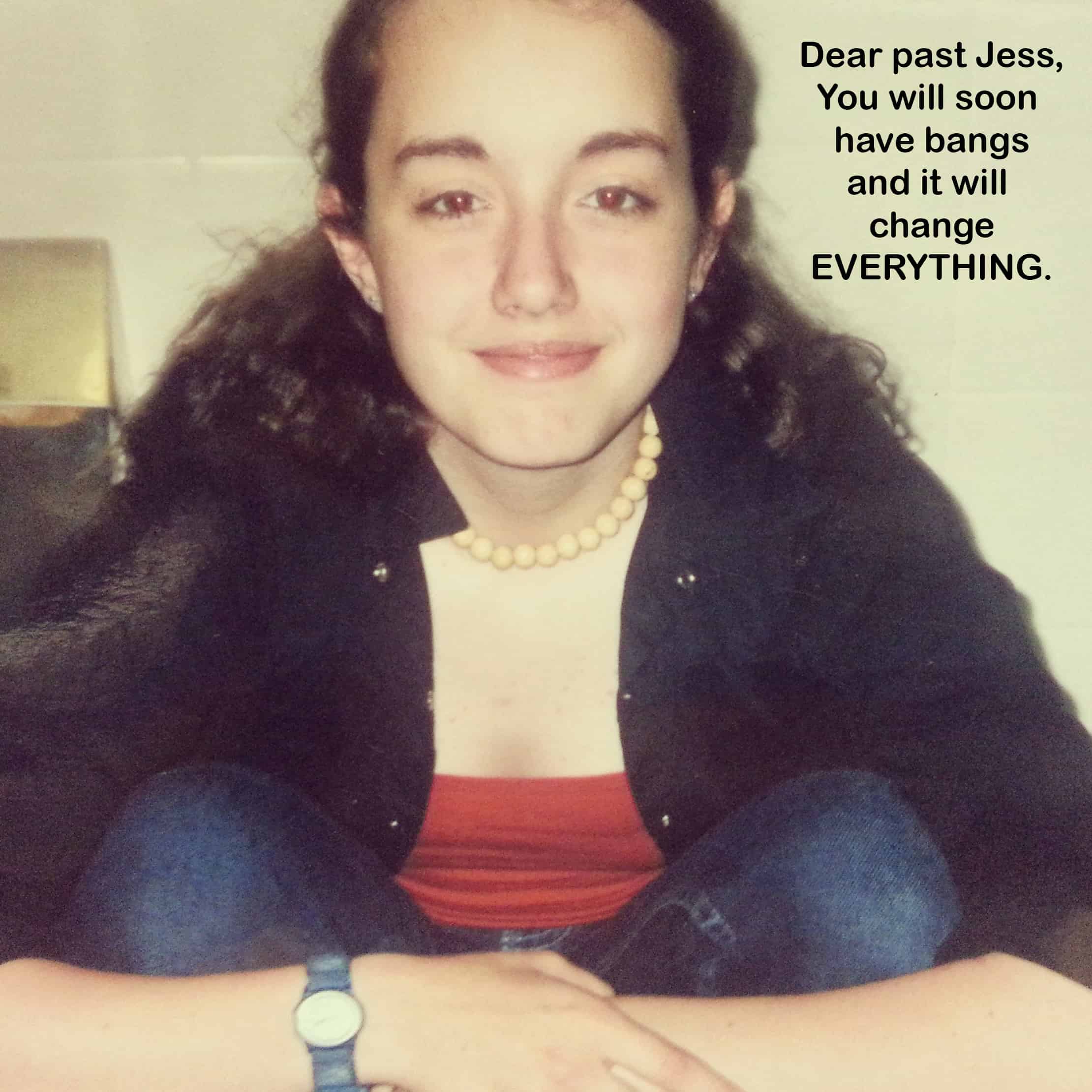 "Gym class was designed to make you feel like garbage and that one teacher is an asshole who doesn’t know shit about shit."

A Letter To Myself, On The First Day Of Grade Nine

Put down that copy of Tiger Beat for a moment to please read this important time-travelling message from future you. Hello. This is 28-year-old Jess writing to 13-year-old Jessica (FYI the -ica will be eliminated in your twenties for efficiency). It has come to my attention that you are going to begin your long, much-dreaded high school journey tomorrow and I have some wisdom to bestow upon you in regards to that endeavour. If you feel so inclined (and I know you will), why not play Amy Grant’s “Baby, baby” in the background as you peruse this letter and imagine that her voice is my voice singing sweetly to you?

First piece of wisdom: Take it easy on yourself, pal. You judge your actions, your choices, and your appearance a whole heck of a lot and you don’t need that added noise. ‘Cause guess what? You’re all that and a bag of chips (is that a thing yet?). I know you don’t believe anything your mom tells you ‘CAUSE SHE’S LIKE THE WORST WHAT DOES SHE EVEN KNOW but she is 100% correct when she says “You’re great, Jessica!” and you shouldn’t feel anything but pride for what you have achieved and will achieve over the next four years. That self-judgement thang is mostly stemming from your concern that others are judging you. And yeah, they might be. But they also might NOT be. You are no mind reader and trying to figure out if that brunette in history class you barely know hates your new scrunchie is a large waste of time. If she hates it, FUCK HER, who cares, moving on.

Second piece of wisdom: Start using the word FUCK in the asap. It’s one of your favourites and seriously helps with relieving scrunchie-related stresses.

Third piece of wisdom: Boyfriends are not your everything so you need not panic if you’re single for what feels like an eternity. I know that all you want is to move on from quietly, weirdly practicing kissing on watermelons, but believe me, there is plenty of non-watermelon lovin’ in your future. Use the time you save from not necking 24/7 to watch Buffy the Vampire Slayer from the beginning. For some reason, you recently started at season 2. I mean, WHAT THE HELL WERE YOU THINKING? GET YOUR HEAD OUT OF YOUR ASS-ICA.

Fourth piece of wisdom: Look up the word “Feminism” and make it your everything.

Fifth piece of wisdom: Calculus is awful and you DO have other skills. Don’t get bogged down in the fact that equations look like Egyptian hieroglyphics to you. Dropping math and replacing it with drama is the right move and do not question it for a second. You are not “closing” any “doors.” That drama class is where you’re meant to be. How do you know? Well, let’s just say that you play a stocky, moustached man named George in grade twelve and receive the following praise from a school newspaper critic: “Jessica was excellent. I didn’t even know she was a woman!”

Sixth piece of wisdom: Eat as many of those garlicky cafeteria pizzas you can get your hands on because they do not exist in the real world.

Seventh piece of wisdom: Those people who don’t like you? Yeah, they’re idiots and you’ll never see them again after you graduate. You actually don’t see most of the folks you interact with under that roof, so don’t sweat it if they turn into jerks and decide they’re too cool to play hacky sack with you. And remember, if someone’s rude to you they’re probably just dealing with their own dilemmas. Their attitudes have less to do with you and more to do with their Dad taking away their Modrobes (a nightmare), so don’t sweat it.

Eighth piece of wisdom: Don’t be ashamed that you can’t get those tampons in. I know it’s frustrating, but there is a reason it’s not happening which you will discover later on. Hint: YOUR HYMEN IS HUGE.

Ninth piece of wisdom: Gym class was designed to make you feel like garbage and that one teacher is an asshole who doesn’t know shit about shit. You are running as fast as you bloody well can. If she really gets on your nerves, fake a heart attack. That’ll teach her to pressure you to move.

Tenth piece of wisdom: You do you, girlfriend. Always.

[SDTC Reader-Pals Suggestion: TRY IT AT HOME! Write your own letter to your 13-year-old self. It’s amazing how much you’ll learn about your present self from doing it.]

Tags: Advice to my 13 year-old self, Back To School, Featured, Grade 9, Open Letters