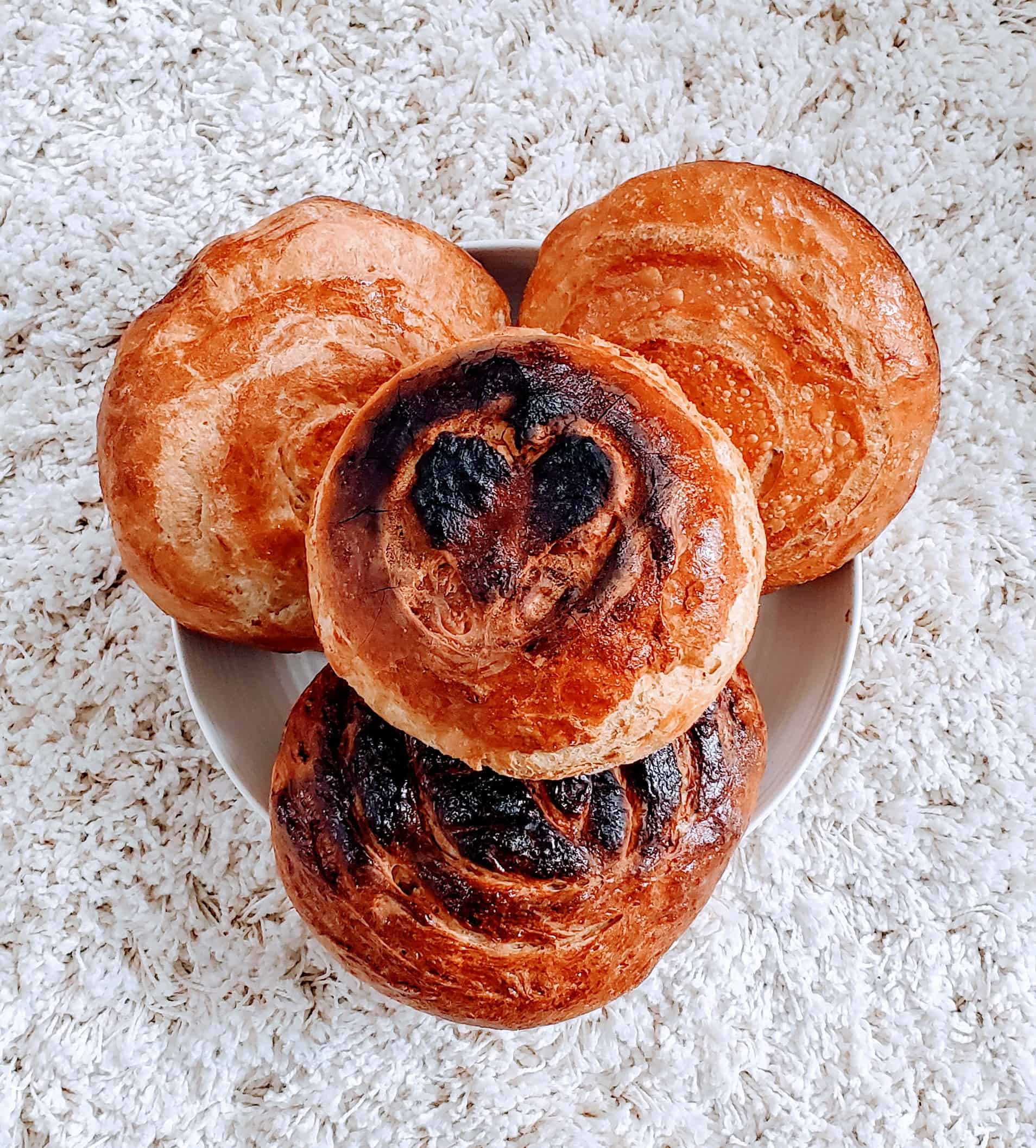 On Friday March 13th, Erin Socall lost her job. She was a private chef for a swish Toronto advertising agency. “It was a great job! I loved what I was doing, and I was able to be creative”, she tells me. But because Erin had been there for less than six months, she was also the easiest staff member to axe, once it became apparent that the economic impact of the COVID-19 crisis would be devastating for the company. “I felt sorry for myself for that first night, but then I figured that I would be off for a long time, and knew I needed to do something with my time.” That’s when the idea came to her to start baking bread for those in need.

A resident of Bloor West Village, Erin lives in a small home, with a tiny kitchen, “You take one big step, and that’s the size of my kitchen—and there’s bread rising all over the place!” She wakes up at 6am each day and begins making loaf after loaf in her 24-inch oven.

When she began sharing about her bread endeavour on social media, she received a trickle of interest from friends, but now Erin is zooming all over, in her hybrid car, to deliver bread around the city. She’s delivering bread to all types of people but shares that the majority are single moms, elderly people, and those with mobility issues. “I have a lot of people who can’t get out. People who have small children and they also have mobility issues. I lost my job, and I’m afraid of where my future is going to lie – I can’t imagine the anxiety and panic that people who are in a different position…what they are experiencing.”

Feeding people is what Erin loves to do, but busying herself with baking also helps her own anxiety, in these uncertain times. “During the day my anxiety is quite a bit lower. First thing in the morning, it’s pretty high, and at night it’s pretty high, but after I start rolling out the bread and writing down where I’m going that day, I get busy and I don’t have time to think about it.”

Coming up on two weeks, Erin is still figuring out the precise details of how to maximize her time, energy, and baking materials. “I’m still trying to figure out the numbers, and how much I can make in a day, how big the loaves should be,” she shares on our call; in the background, I can hear her opening and closing her oven. “I’m trying to figure it all out to get as much bread out to as many people in a day.”

Erin is not the only one who has begun furiously baking bread since the pandemic outbreak, my Facebook feed is full of photos of freshly baked loaves. I ask Erin why she thinks bread is such a source of comfort for people, and she cites numerous reasons: “Flour is easy to come by. Even though in the grocery stores it’s not necessarily readily available at the moment, most people have it in their pantry. They have flour that’s been sitting there for months, or maybe a year! You can utilize it in so many ways. You can make soda bread with almost nothing. You can make naan bread with almost nothing. You don’t need to have yeast, you don’t need to have butter, you can make something that’s edible with almost nothing other than flour and salty water. There is comfort in that, this is something that can nourish me that’s warming my insides. It’s something that takes you back to maybe your childhood or your grandparents or baking with a family member.”

Of course, bread also fills us up. “It does have proteins in it. It sustains you, and has been sustaining people for hundreds of years, and gives your body the sugar that will deplete if you don’t have anything else.”

While Sourdough seems to be the trend right now, Erin has been busy baking Artisan Cobs, “They’re easy to do, they’re inexpensive, there’s not a lot of kneading, they’re pretty, and I carve little hearts in them to send out my love to everybody.”

So far, Erin has been managing her industrious bread endeavour by dipping into her savings to pay for food costs, but with the need continuing to grow, she’s launched a GoFundMe page, where she’s encouraging Torontonians to donate what they can, “even $5-10 can help feed a family.”

With the end date of the COVID-19 crisis unknown, Erin wants to grow her capabilities to include meals like lasagna and soup. If you know of a bigger kitchen that is available, she’s willing and happy to cook as much as she can. Connect with her on her Instagram account: @mad.food.love.