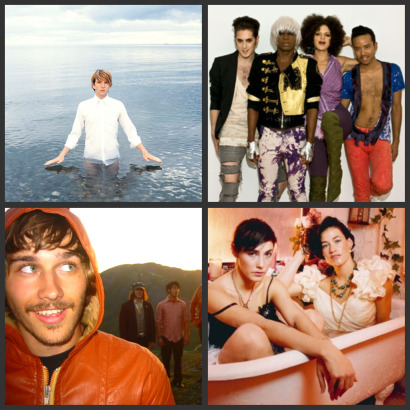 From MSTRKRFT to Girl Talk to Franz Ferdinand to The Hold Steady, there are a lot of big names coming through the city this September. But also paying a visit to make the back to school/back to rain pill a little easier to swallow are some lesser-known, no-less-loved acts. Here are some of our favourites.

Band of Horses at Commodore: Sept 4

This four-year-old Seattle band is a lot like what their name suggests-indie rock and roll with a country twang and a lot of cred. Cease to Begin, their second album released on Sub Pop Records, has garnered them loads of late-night and prime time TV attention, been sampled in a Kid Cudi remix, and will make you feel like watching a sunset snuggled around a plaid-clad bearded boy. Lovely.

Americans-in-Paris Sienna and Bianca Casady are the sisters behind CocoRosie, a band talked about by cool kids at the back of lecture halls since their debut in 2003. Last year, Bruce La Bruce used two of their songs in his gay zombie film ‘Otto, or Up With Dead People.’ If that doesn’t convince you, we don’t know what will.

True story: When I was volunteering in an environmental capacity at Bonnaroo this year (read: being a garbage man for a free ticket), the soft-spoken mid-western boy I was sorting compost beside almost threw his back out trying to catch a glimpse of this much-buzzed indie band’s set from our post in the Bonnaroo boonies. Single-handlely giving Sarah Palin’s hometown a chance to redeem itself, these Wasilla natives have set up camp in Portland, and the hearts of music fans everywhere, incorporating soul, folk and blues into their tunes.

It’s easy to get distracted when taking in the four-headed Toronto dance juggernaut that is Fritz Helder and the Phantoms. Why? They always look so damn good. But don’t let that stop you from appreciating the fact that they don’t just look fierce, they also sound it. One listen to their infectious, over the top, fabulous songs, and you’ll never pre-drink to another album again.

‘Lovely Allen’ is the kind of song that could stop wars, save lives, and rebuild bridges. Usually I would be exaggerating, but this time I’m not. Holy Fuck’s electronica ranges from heartwrenchingly delicate to aggressively powerful, and it’s one of the most original and exciting musical experiences you’ll ever have. Worth going to no matter what, and very effective for impressing attractive art students.

Oh, Owen Pallett. With your seven schools of magic, and your violin. With your Arcade Fire string arrangements, your floppy bangs, your shiny Polaris Prize. Your weird album titles and many, many cardigans. We love you. Pallett is like that guy in high school who was friends with everybody, weirder than anyone, and still the coolest person you’ll ever meet.