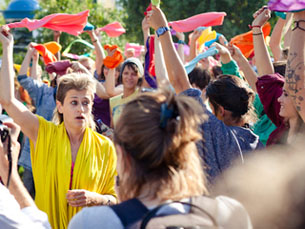 Free Pussy Riot! Artstars* is on set in Berlin as Peaches and Simonne Jones make a music video supporting the girls

Russian punk feminist band Pussy Riot have become synonymous with the fight for free speech in the last few months. The three women were taken into custody after a protest staged at the Cathedral of Christ the Saviour of the Russian Orthodox Church in Moscow. Their arrest is being seen by the world as an affront to freedom, and celebrities from Kathleen Hanna to Madonna have spoken out in support of the band.

Peaches and Simonne Jones are making a music video in support of Pussy Riot. Nadja Sayej from Artstars* was on set as Peaches helps wrangle the crowd and avoid the police. The video has support from the likes of Lykke Li, Nick Zinner of the Yeah Yeah Yeahs, Jake Shears of Scissor Sisters, and more.

To sign a petition in support of Pussy Riot, find out more about the video, and donate funds directly to the women, click here. To see Nadja reporting live from the set, click here, and read what she had to say about support for Pussy Riot in the New York Times.

Women in Focus: She Does the City’s Guide to Luminato 2018

Inspiration Is a Monster Series at AGO w/ R.L. Stine, Peaches & More