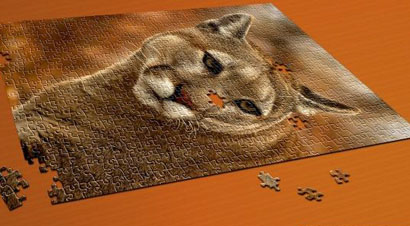 For the past couple of months I have remained abstinent. Actually, I have been doing puzzles -the really interesting kind with images of fish and wildlife. But to the lesbian community, doing puzzles instead of partying is like being one of the Jonas brothers, not the good-looking one and not the one that dated Miley – the loser one. After two entire walls in my apartment were filled with framed puzzles I decided that it was time to activate my vagina. A hot, youthful girl can only hibernate for so long before she feels the seductive pull of other likeminded, fresh young women.

I had only been out of commission for twelve weeks and already the world seemed a little different. Hilary Clinton appears to not be the new president. My favourite deluxe brand of cat food is ridiculously cheap. There are way too many homeless people on the streets. And Christian Bale is a huge asshole! But besides all of these minor changes, the lesbian community seems to have been affected the most by the recession. The average level of sexual hunger amongst lesbians has increased forty percent. At most bars, the relaxed vibe of yesteryear has morphed into something frightening, like a scene from American Gladiators. Lesbians have become so desperate that they are now invading new territory – even The Barn, a once male only-nudity encouraged hot spot is now hosting a ladies night. Why is the world so backwards?

Before I entered into a puzzle induced coma I remembered lesbians and gay men partying separately. Now, with this recession, lesbians have become so hungry for chances to snag nubile chicks that they will go to any lengths and to any location. Lesbians used to put extreme effort into impressing strange women. They would read the dictionary, practice pick-up lines and use full sentences. In this new, bizarro universe, all a lesbian does to find a date is write random words on some girl’s Facebook, like “Yo Mama” and “Sup Sexy.” Even lazier, instead of physically displaying a thumbs-up, a lesbian can now click on a new “thumbs-up + like” icon to show that they are flirting and mean business.

I remember a time, when you accidentally called or communicated with a stranger you would, a) be embarrassed b) apologize, and c) never contact them again. However, in this new environment, the lesbian will take this as a sweet opportunity to service a girl’s vagina. Just recently, some lesbian phoned me at 4am in the morning to ask me on a date. It was revealed that I was not the lesbian who she meant to call. Yet, after discovering this fact she continued to ask me on dates. Despite her not having seen my face and the possibility of me being super old or super deformed, she still insisted that she felt “good vibes” and wished for a potential relationship. This is creepy.

As if all of these above-mentioned things aren’t appalling enough, lesbians are now actively cruising in broad daylight, on the sidewalks of Toronto, and with no regard for actual sexual preferences. The other day, I was enjoying a warm salad at the local Jack Astors when my feeding was interrupted by the sounds of a lesbian trying to pick up her waitress. News Flash: they are paid to be nice to you! When I sweet talk the librarian I know she’s into it because she doesn’t work for tips. But the lesbian that misunderstands the feminine flirtation of a waitress is an embarrassment to her kind.

Once upon a time, the average lesbian would wait a respectful few days before honing in on a recently dumped girl. This same lesbian would always wait a cool week before having sex with her friend’s ex-girlfriend. In this changed climate, the average lesbian is like a famished shark waiting only minutes before attacking a helpless seal. As of yesterday, one in every three lesbians had at least one tooth sunk into a broken relationship. Appalling.

I guess I had not fully prepared myself for re-entry into the lesbian zone. I understand what can happen to a person when they lose all sense of reality and everything that is important to them. I have lost many cats over the years and I will never be fully complete because of it. I can imagine what it must be like for a shipwrecked castaway to drink his own urine because he has no choice. I can even relate to those soccer players who were stranded after their plane crashed and had to eat each other to survive. But I cannot understand what has become of today’s lesbians and their heightened level of creepiness. I feel that I must officially ask for the government to intervene and provide a bail-out for the lesbian community. People can live without cars or university professors, but they cannot live without functioning lesbians.