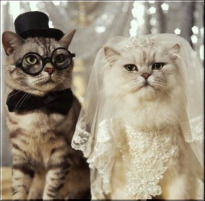 Yesterday, I accidentally stumbled upon this thing that was like a book about cats, except it also had boxes with numbers on them. And then I remembered this wasn’t a book about cats, it was a calendar! I had been under the impression that since Pride, only a few days had passed by. But this calendar informed me that, in fact, it had been a whole two months! I was in shock and went over all the possible disasters that could have occurred. Was I suffering from amnesia? Did I finally finish building that time machine? I couldn’t understand why I had missed the entire summer. What could have sucked my life into such a vortex? Then I glanced over at my new wife. Oh right….

Before this instance, I never understood where lesbians went to after they found real girlfriends. I used to think that there was some kind of disease that targeted happy lesbians and caused them to evaporate into thin air. But now I knew that they didn’t leave this mortal coil, they just sold their souls…to each other. In love. You might be asking, who is this wife of mine? I guess I should start from the beginning: Pride 2009.

I was in the middle of my annual Pride stretch routine. This routine is a combination of lunges and arm rotations and it drastically increases my chances of catching the wonderful gifts that are thrown from the floats. I had already assumed a crouch in anticipation of my favourite coloured beads when another hand reached up, in slow motion, and grabbed onto the same beads I had already caught. I looked over and saw the lady of my dreams. Our cats immediately locked eyes. Two days later, I moved into her apartment. She insisted that we get married right away because it is apparently a romantic gesture proving that love at first sight does exist. I was told that we experienced a traditional marriage. To express our commitment to each other, we got matching tattoos. Then we ordered take-out from an Indian restaurant. Then we exchanged vows in front of the Alexander Wood statue. And then we drew blood from our fingers and shook hands. It was a truly moving experience and many people cried.

So far my marriage has been running a smooth course. I feel as though I have found myself. Considering this is my first real relationship, I am living a true success story. I have become a better person by learning to do the laundry and make grocery lists. I feel as if what I am accomplishing now is more important than anything I did before. When I was lost, single, and alone, my actions were so meaningless. Now I serve a higher purpose.

No wonder two months have gone by so quickly. Although we don’t technically have sex or sleep in the same room anymore, we are happier than ever. Even though I have had to take on two extra jobs to support us, my wife’s hobbies are integral to human kind. Not only does she plant trees and flowers to supply more oxygen to the community, she also hand crafts necklaces for aboriginal women. She is one of a kind.

Sometimes when I am on a break from being in love and look back, I admit that maybe I miss the excitement of grinding with multiple hotties at the club. But then I think about how excited I am to spend the majority of my life savings on a new puppy, mountain bikes, hand woven picnic blankets, a ceramic composter and a bread maker.