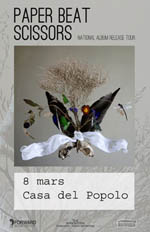 5pm. Art Matters ‘Block Party’ Vernissage @ Annex Vintage, 56 St-Viateur West. As part of this year’s Art Matters Festival, seven Mile End venues will take part in on-going 8-day exhibition (until March 16), in which art enthusiasts are encouraged to tour the neighbourhood while taking in (and possibly purchasing, if you are so inclined) the work of 13 fantastic local artists. For details, visit the event’s website. Until 7pm.

11pm. TWO TONE #004 @ Korova, 3908 St-Laurent. When was the last time you went to Korova on a Saturday night? The fourth edition of the mostly-monthly Two Tone Crew dance party will consist of deep house, UK funk and bass beats by Forrest, Kwikfiks and Sulley. No cover (because it’s Korova, hello).

2pm. Clothing Swap & Film Screening @ Les Sandwichs Volants, 5054 du Parc. Bring any (clean!) used clothes you may not be feeling anymore, along with books, movies and other particulars you are down to trade in Les Sandwichs Volants’ first clothing swap! The afternoon will also include a screening of Dive!, an award-winning documentary about dumpster diving in LA. Until 7pm. Free entry.

For The Kids: Get All Your Back-To-School Shopping (Trading) Done Tonight